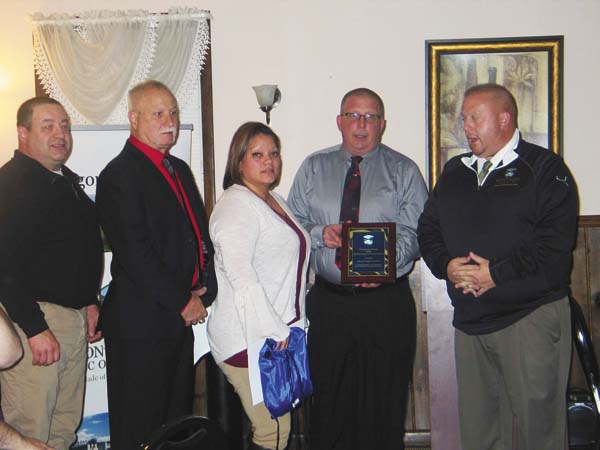 Members of the Montgomery County Emergency Services Office are shown at the annual Appreciation Dinner for First Responders held on Thursday. (The Leader-Herald/Briana O'Hara)

First responders in Montgomery and Schoharie counties were honored and given thanks for risking their lives to save the lives of others.

“Congratulations to all of this year’s nominees and to all the first responders we have recognized over the past five years,” said County Executive Matt Ossenfort in a prepared statement. “You deserve to be thanked often for the jobs you perform that keep our communities safe and I’d like to show my appreciation to every first responder during this time of the year. I am so proud that we have turned this event dedicated to first responders a tradition in Montgomery County.” 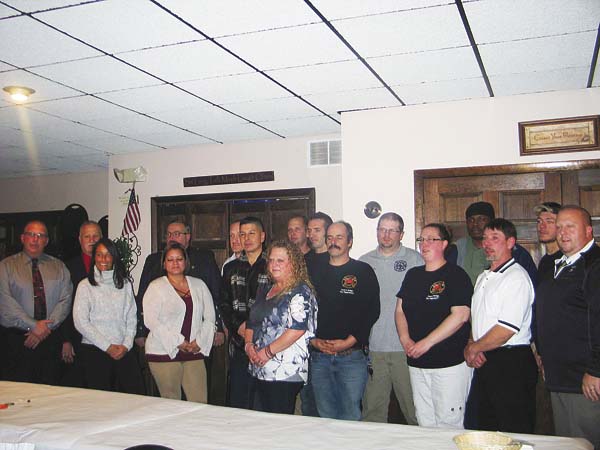 Nominee Trooper Clark is one of the senior troopers at the Fonda State Police barracks with more than 13 years as a “road trooper.”

“It’s my honor and privilege to recognize Trooper Rose Clark as a distinguished Montgomery County First Responder,” said Captain Daniel Larkin. “She has a tremendous work ethic and it is evident to all who work with her that she still loves what she does.”

Montgomery County Sheriff’s Lt. Bert Wilson said he chose to nominate the Montgomery County Emergency Services Office because he thought as an organization they work in every aspect from prevention to aftercare.

“They benefit every agency, every group, every department in all levels throughout the entire organization and we certainly appreciate everything they do,” Wilson said.

The emergency services team provides assistance to both the community and first responders in the county, along with coordinating the Critical Incident Stress Management team. They meet on a regular basis to identify ways to be safer and mitigate problems that may arise during an emergency.

“This truly is a team,” Smith said. “Without one of us in this group, it would be a different situation. We all work very hard together.”

Nominee Graff, member of the Florida Volunteer Fire Department has served for 51 years responding to over 75 calls per year. Graff is also the chairman of the board and recently elected as captain – third assistant chief of fire police.

Chief Les Bramer “He’s there on calls during the day, he covers those calls that a lot of us can’t cover,” said Chief Les Bramer. “He closes down his own business and he puts the fire company before anything and to me that’s special.”

Joel Torres and his daughter ,Yvelisse Torres, who aren’t first responders, were nominated for their heroic actions to help Jeremy Bell, who was fishing near Lock 12 in Fort Hunter, who had slipped and fell into the water.

They used a stick for Bell to grab onto and helped him out of the water.

“Without them I definitely wouldn’t be here today,” Bell said.

Lisa Surnear, who is a nurse at St. Mary’s Hospital, had witnessed a traffic accident in the town of Amsterdam. One of the passengers in the vehicle was unconscious and unresponsive. The patient was in cardiac arrest, so Surnear began CPR until an EMS arrived. Prior to arriving to St. Mary’s Hospital, the patient recovered.

“Lisa’s efforts were very commendable and because of her selfless efforts, this patient was able to return to his family,” said Greater Amsterdam Volunteer Ambulance Company Operations Manager Mickey Swartz.

Also nominated for saving the life of someone in cardiac arrest was Trooper Greg Langtry, who responded to the scene at the Mohawk Rest Area, along with a GAVAC paramedic. Langtry initiated CPR and continued his efforts for two cycles at which time the patient regained pulse. The patient arrived to he hospital with a stable pulse and blood pressure.

“Without his efforts, I’m not quite sure how that would have turned out,” Langtry said. “He definitely went above and beyond.”

Also being honored at the event and recognized for responding to the devastating limo crash on Oct. 6 were Schoharie County Emergency Responders.

“We want to recognize your response, your involvement [in the] difficult task to respond, to deal with that aftermath,” Smith said. “We appreciate everything that you do and we want you to know you have partners here to the north and we respect what you do and we are always here for you should you need something from us. Everyone in this room has been involved in an incident at some point in time that’s been tragic, but nothing in that magnitude, so thank you for your very hard work and dedication in doing what you do.”