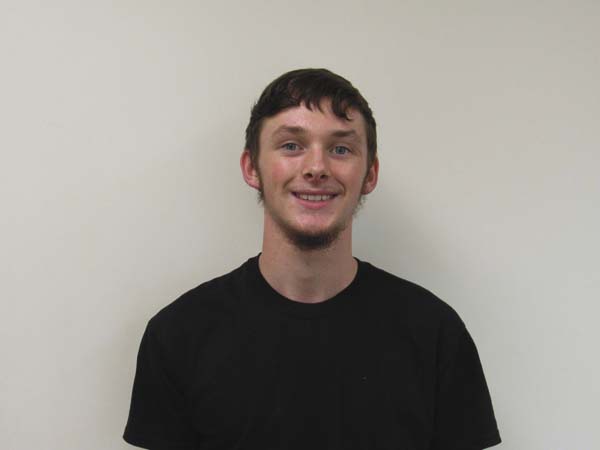 Jordan Laverdure, a Gloversville High School junior, poses for a photo at the school on Friday, two days after he gave the shoes of his own feet to a man in need that he noticed while playing basketball with friends at the Elm Street Playground. (The Leader-Herald/Ashley Onyon)

GLOVERSVILLE — While most students get new shoes for the first day of school, one junior at Gloversville High School gave a pair away to someone in need.

While playing basketball with friends at the Elk Street Playground after the first day of school on Wednesday, Jordan Laverdure noticed a man walking down the street with a shopping cart. Then he noticed the man’s shoes.

“I saw that his shoes were torn up and ripped and I had shoes on my feet and he could use them more than me,” Laverdure said on Friday. “It’s just one of those things, I had to give them to him.”

Laverdure said he called out to the man asking him to come over to the “cage,” but the man was reluctant and beckoned him across the street to the Gulf instead.

The 17-year-old left his friends wordlessly and approached the man, asking him what shoe size he wears. The man answered that he wears a size eight and Laverdure replied that he wears a 10 and a half and began removing his shoes, placing them in the man’s shopping cart.

“They were my previous basketball shoes, they were just Stephen Curry’s. Nothing fancy, just something to help him out,” Laverdure said. “I’ve seen him before and I thought about what I’ve been through in my life and it made me reflect to him. I haven’t always had a lot, so I know how it feels.”

The man thanked Laverdure and continued walking along the street. The boy crossed the street in his socks and rejoined his friends. He put on a pair of sandals he had with him and the game carried on.

Laverdure said his friends didn’t say anything about what he’d done and he was too focused on helping the man to know if they’d even noticed, but when he woke up the next morning it was clear that someone else had and posted about witnessing the incident on Facebook.

Laverdure said the social media post received a great deal of positive attention and inspired him to want to do more.

“This year I think I’m going to make a change and start getting involved,” Laverdure said. “I just want to do something.”

Laverdure said he plans to talk to his friends about different ways to help others and after high school he hopes to become a police officer in the city to support the community.

“They help people and that’s something I want to be involved with in my life, helping others,” he said. “My goal is to eventually have an impact on Gloversville and hopefully change it to a completely positive area. If I could do that, that would really touch my heart. I’d feel really, really accomplished.”

Laverdure said he grew up with his grandparents in Bleecker, moving to Gloversville with his father when he was 13. Though he misses his childhood home, he feels comfortable in the city.

“I hear people say they don’t want to raise their kids here,” Laverdure said. “But Gloversville really isn’t that bad of a place.”

He pointed out that it’s the people who live in any given place that make it what it is, saying he hopes that city dwellers will develop a more positive outlook and work to change the things they are dissatisfied with.

“Care for people,” he said. “If you see somebody in need and you have it, try to help. To them anything is probably like being little kids and going downstairs and opening presents on Christmas.”

Giving someone the shoes off your own feet isn’t the only way to help out, Laverdure said a simple greeting can go a long way.

“A little ‘hi’ can make a big difference, it can makes somebody’s day or a smile could make somebody’s day,” he said. “Just make them know that people know that they’re still here.”

That’s what Laverdure said he was trying to do by giving his shoes away, reach out to a man he often sees by himself.

Overall, Laverdure said he hopes others will be inspired by his action to put themselves in other people’s shoes and then return the favor, if not literally as he did, then figuratively with a small gesture.

“Everybody has a back story, they’re fighting something that nobody knows about, it could be depression, anything, so even a little act of kindness could possibly change how the person’s day is going or maybe even their life. That’s what I’m trying to do, I want to help people, I don’t want to see people struggle.”