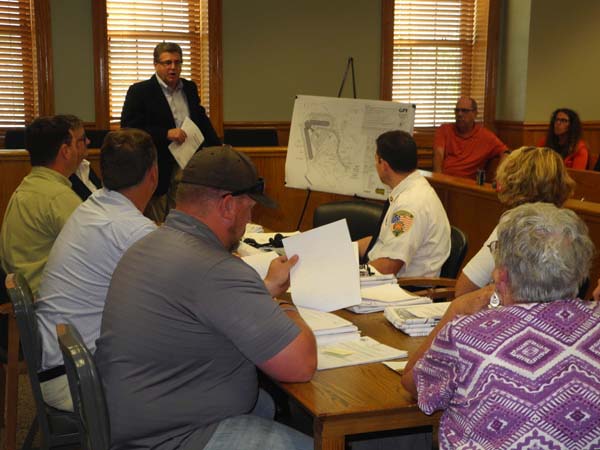 JOHNSTOWN — The city Planning Board reviewed a site plan for a proposed vehicle maintenance addition to the Brown’s Ford dealership on Route 30A Tuesday afternoon at City Hall.

The board declared itself lead agency for the project’s required state Environmental Quality Review.

Board Chairman Peter K. Smith also noted that City Code requires a public hearing on the project. The hearing was set for 4 p.m. Oct. 2 at City Hall. He said final action on Brown’s application may be taken by the board then.

Engineer Joseph Bianchine of ABD Engineers LLP of Schenectady presented Brown’s project to the board. Brown’s wishes to construct a 4,800-square-foot metal building addition to its existing 121 N. Comrie Ave. building. The addition would be at the rear northwest corner.

“There will be four overhead doors,” Bianchine said.

The new space will be used for maintenance of vehicles. The add on would occupy a paved area so there will not be an increase in stormwater runoff. No plumbing facilities are anticipated in the addition. One shed will be removed and relocated on site, if necessary.

Bianchine said the addition will sit back, but will be seen from North Comrie Avenue. He said the project will have no new outdoor lighting, and no additional signage.

The engineer said the project will have a normal “slab on grade” construction.

Smith said the project must be referred soon to the Fulton County Planning Board for its review because of its proximity to a state highway.