A place of history and holiness 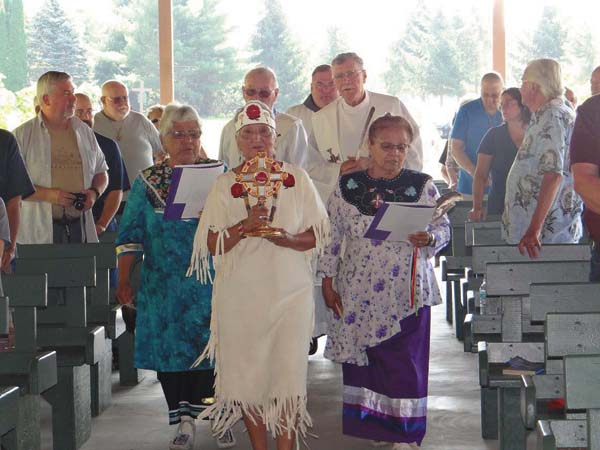 Participants in the celebration of the feast day of St. Kateri Tekakwitha on the weekend of July 14 process in with a relic of the saint's bones during the Kateri Shrine's 80th anniversary in Fonda. (Photo submitted)

FONDA — Not far from downtown is a place known for both history and holiness.

In 1938 Franciscan priest Thomas Grassman established a shrine on Route 5 to a woman known as Kateri Tekakwitha, who in 2012 was canonized as the first Native American saint by Pope Benedict XVI .

But in the 1950s, Grassman also authorized an archeological dig uphill from the shrine that became the only Mohawk village, called Caughnawaga, to be fully excavated, making it a national historic shrine. Today only stakes from its original stockade and longhouses remain, along with “tons of artifacts” in the shrine museum, said shrine director Rita Gillion.

The shrine, which celebrates its 80th year, has both images and artifacts about St. Kateri and her heritage as an Algonquin-Mohawk woman who became a Christian despite persecution from her own people.

“It surprises me the number of people who don’t know the shrine is here and don’t know about St. Kateri,” said Gullion. 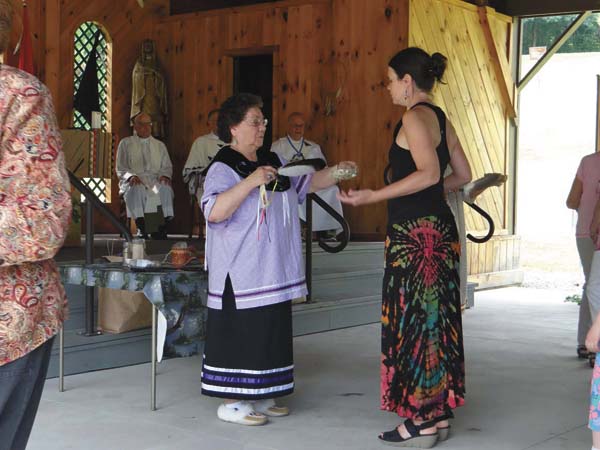 Participants in the celebration of the feast day of St. Kateri Tekakwitha on the weekend of July 14 perform a Native American smudging ceremony, waving smoke from herbs as a blessing, during the Kateri Shrine's 80th anniversary in Fonda. (Photo submitted)

Gullion said the shrine is a witness to “her incredibly strong faith, her devotion to Jesus.”

She said Kateri was the daughter of a Christian Algonquin mother and a non-Christian Mohawk father. Her mother, father and brother died of smallpox while Kateri was left with pock marks and partial blindness. This how Kateri got the name “tekakwitha,” which means “she who bumps into things.”

Kateri had to flee to Canada from her village because of persecution by her tribe based on conversion to Christianity and her vow of perpetual virginity, Gullion said. Her vow ran counter to the tribal custom that a woman must marry so that her husband would care for her parents in their old age, she said.

She was named Kateri after St. Catherine of Siena following her baptism by Jesuit priests. She died at the age of 24, and her last words were reportedly “Jesos Konoronka”— “Jesus, I love you.”

Kateri practiced severe penances because she want “to feel Jesus’ pain and suffering,” though the clergy encouraged her to moderate them, Gullion said. Her feast day, which is July 14 in the United States, was celebrated at the shrine. The event included mass, Native American smudging with herbal smoke as a blessing, drumming, and exposition of a relic of a piece of the saint’s bones. 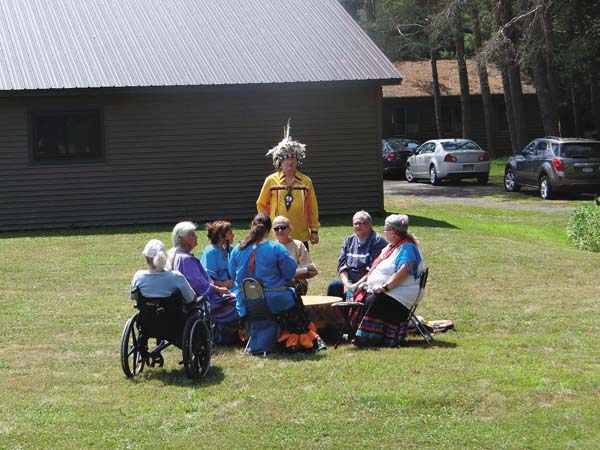 Participants in the celebration of the feast day of St. Kateri Tekakwitha on the weekend of July 14 form a drumming circle during the Kateri Shrine's 80th anniversary in Fonda. (Photo submitted)

Kateri is the patron saint of ecology, the environment and creation.

Our Lady of Angels Province of the Conventual Franciscans provides pastoral care at the shrine.

The shrine will hold an 80th anniversary gala in honor of the Most Rev. Edward B. Scharfenberger, bishop of Albany, at River Stone Manor in Glenville on Oct. 17, from 6 to 9 p.m. It will include hors d’oeuvres, desserts, cash bar, silent auction and drawings to benefit the shrine. It is seeking donations and sponsors for the event.

The cause for a potential second Native American saint also is under way but not nearby. A onetime Lakota medicine man Nicholas Black Eagle of South Dakota converted to Christ and brought more than 400 other Indians with him. He lived from 1863 to 1950 and reportedly took part in the Battle of Little Big Horn in 1876 in which Lt. Col. George Armstrong Custer and his 7th Cavalry troops were massacred.