Eating his way to a free meal in Johnstown 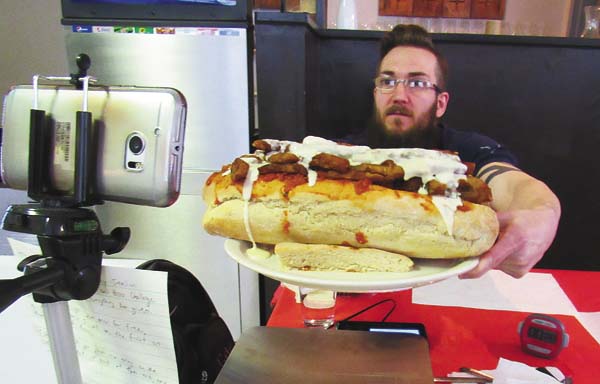 Mark Gdd, a challenge eater from Montgomery County, displays a 5.4-pound sub made of meatballs, chicken and eggplant he was able to eat in less than 30 minutesÑ19 minutes and 39 seconds to be exactÑSaturday at Saucy Italian on Market Street in Johnstown. (The Leader-Herald/Eric Retzlaff)

JOHNSTOWN — Mark Gdd had a goal Saturday, and easily exceeded it.

The challenge eater from Montgomery County managed to down a 5.4-pound sub of meatballs, chicken, as well as eggplant fries and lots of bread in 19 minutes and 39 seconds at Saucy Italian on North Market Street.

His wager with the restaurant was that he could finish it in 30 minutes. Because he won, Annette Cavallaro, the owner, gave him a $10 gift certificate to Saucy Italian, the food he ate was on the house, and Cavallaro plans to put him on a wall of fame she’ll erect.

For a restaurant aficionado, seeing him gobble the sub with his vinyl-gloved hands wouldn’t be pretty. He made quick work of the innards of the sub, but his wife, Amanda, had to offer him water periodically to help him chew the bread.

“He’s very focused during the challenge and pretty much doesn’t hear anything going on around him,” she said. 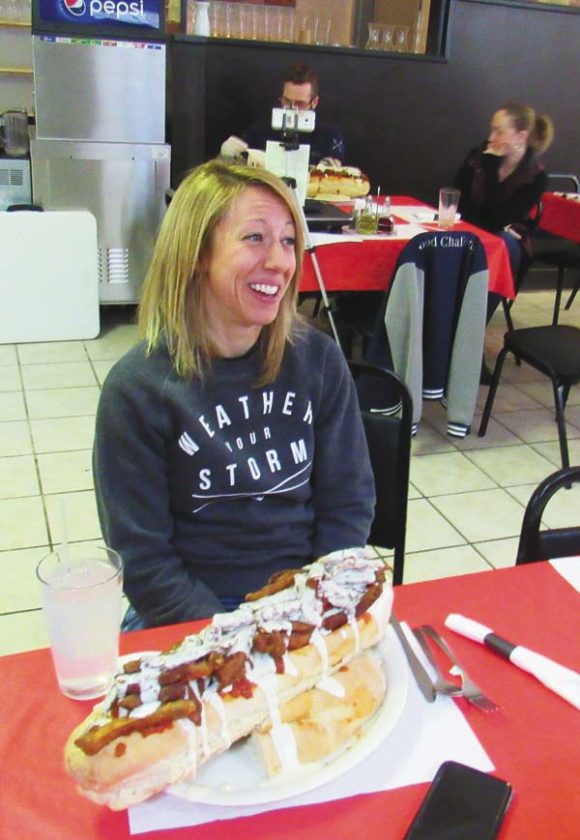 Jen Haggard, a power lifter from Johnstown, tries to compete with Mark Gdd, a challenge eater. in consuming a 5.4-pound sub Saturday at Saucy Italian on Market Street in Johnstown but quit after she ate the insides and some of the bread. He finished his in the less than the 30 minutes that was his goal. (The Leader-Herald/Eric Retzlaff)

Being able to consume so much bread “is completely mental,” Gdd said.

His wife said he uses gloves because “he doesn’t like getting his fingers dirty, sauce under his nails.”

After he won the contest, he said, “Physically I’m fine,” and that he reached only two-thirds of his capacity.

Another patron, Jen Hazzard of Johnstown, a self-described power lifter weighing less than 120 pounds, also decided to take the challenge, but with a fork. She got through the insides and some of the bread, but then quit. 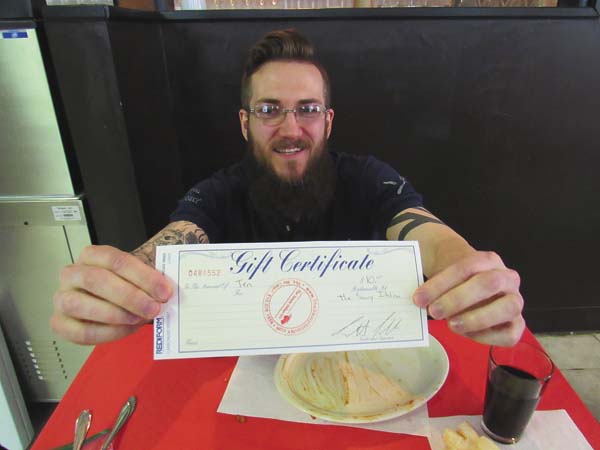 Hazzard said she decided to compete because “a friend who knows I can eat an incredible amount of food tagged me” in a Facebook entry about Gdd’s challenge.

Gdd likes food challenges and admires Randy Santel, a guy he says is the number one challenge eater in the world, having won almost 600 challenges all over the globe.

A former Marine who got a medical discharge due to a service injury, Gdd once was overweight at 260 pounds in 2011 from “a bunch of unnecessary eating at random, uncontrolled times” but managed to drop down to a lean 165 pounds by careful control of calories —“consume less than you burn,” he said. He said he avoids fatty foods before food challenges because they inhibit his ability to compete.

“If you watch what you eat, you will not gain weight,” said Gdd, who maintains a diet regimen that enables him to consume large amounts of food in a challenge.

“I record every single thing that goes in my body.”

He’s won every challenge since he began in January except for an ice cream challenge on Long Island.

“I’m definitely looking for revenge on that one,” he said. His reason is that the challenge was supposed to be five or six pounds of ice cream but turned out to be 10 because the restaurant scooped the ice cream–an imprecise way to measure, he said.

Gdd, who won’t give his real last name or home location so as to avoid cult followers, originally approached Cavallaro about the challenge.

“I just thought it would be a great idea–a real hoot,” she said. “We did it just for fun.

“We need a little excitement around here.”

A video of Saturday’s event will be posted on You Tube next Saturday at noon under Gdd, Gdd said,