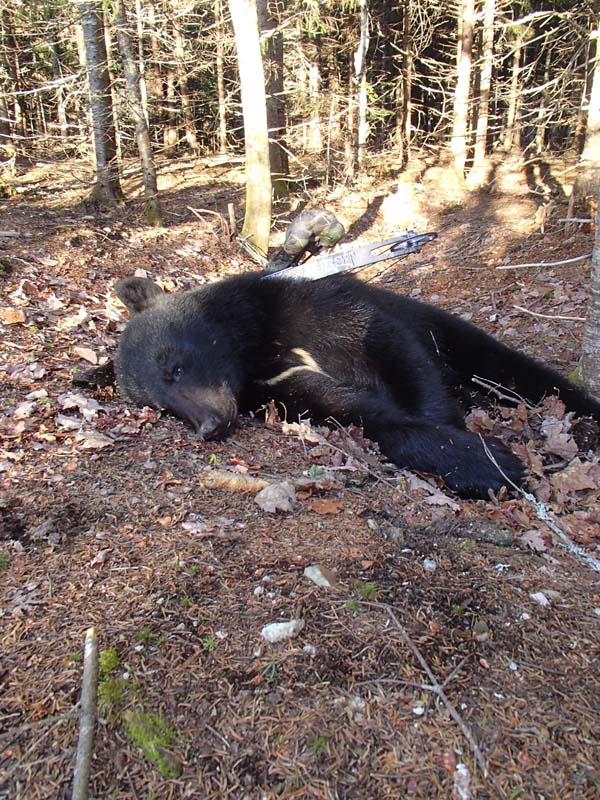 The desire to travel to New Brunswick on a spring bear hunt started more than 20 years ago when I was assigned the title of “Speaker Coordinator” for the Perth Bible Church Sportsman’s Dinner.

The dinner hosted anywhere from 700 to 900 people in one day and all of the game meat was prepared by the members of the church, it was a great event and I took the responsibility very serious. Jack Douglas of Douglas Archery in Galway told me about a bear hunting lodge in New Brunswick that was very good. Jack always invited me along on the annual hunt but due to work commitments, kids in school, and other reasons, I was never able to go. Jack told the guide at Oak Mountain Lodge Outfitters, Mr. Clarence “Buckaroo” LeBlanc, about the dinner he attends and Buckaroo was generous enough to donate a bear hunt as one of the dinner prizes that year. Jack went to Oak Mountain Lodge Outfitters for 16 years, and every year he got a bear.

Jack always told me about Buckaroo, who wears a large leather hat and jacket that is decorated with feathers, bear claws, bear teeth, and a scrimshawed bear tooth. His leather jacket is well adorned with the testimony of 40 years as a bear guide. Buckaroo has been called the “Dundee of the North” and is a true French-Canadian outdoor guide who is one of the friendliest people you will ever meet.

Unfortunately, once I was able to commit to going this year, my dear friend and archery mentor Jack passed away. However, the hunt must go on, and his spirit was certainly with us. Stories of Jack and his bears, camp cooking, and friendship were told throughout the week at the lodge. The lodge can sleep up to 10, has a full kitchen, TV (for watching the hockey playoffs), all of the amenities needed for a comfortable stay.

The lodge is located between Sussex and Alma, New Brunswick and it’s situated on the edge of deep wilderness and the Bay of Fundy National Park. Alma is a coastal fishing village situated on the Bay of Fundy which has tides up to 55 feet, a Guinness World Record. In a tidal cycle (2X/day), it is reported that anywhere from 115 to 160 billion tonnes of water flow into and out of the bay. The extreme tides and beauty of the national park draw in tourists from all over the world. 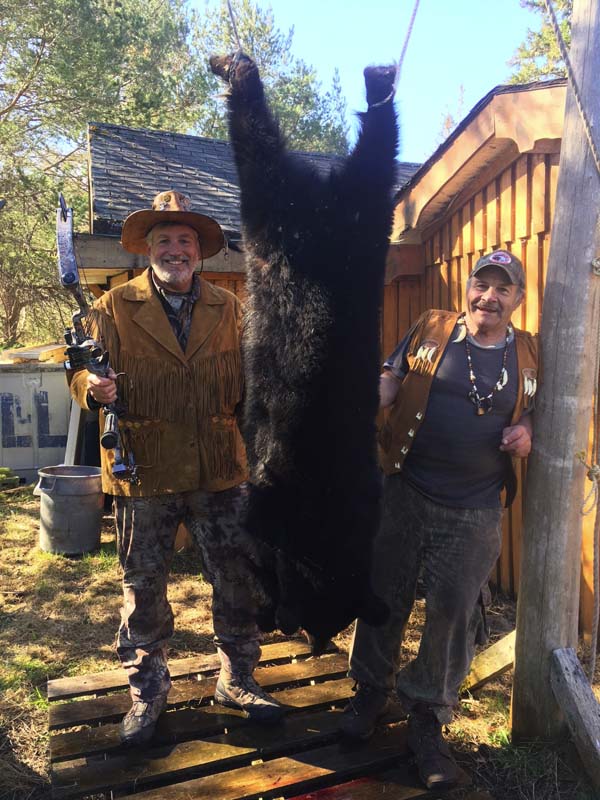 Each night, Buckaroo would show us trail cam photos of the bears at the stands so we knew what to expect. Each stand had anywhere from 3 to 6 bears at it so our confidence was high.

The first two days on the stand were windy and wet as the storm that produced tornadoes here, swept through. The swirling winds kept the bears away. On the third day, the weather calmed making for a comfortable six hour sit.

Animals were active and a porcupine, raccoon, red squirrels, goshawks, a broad-winged hawk, ravens, crows, and various songbirds passed through in front of the tree stand. But, no bears came in. My buddy got down from his stand at 9:12 p.m. (they are an hour earlier than us) and the trail cam pic showed three bears at the site at 9:20 p.m., they waited for him to leave. As a result, we were going to new sites that had not been hunted yet.

My new site was the most remote Buckaroo had. It was within a mile of the Bay of Fundy National Park boundary and 8 miles off of paved road. Old logging roads only passable in good weather brought me an old logging landing, from there it was a mile hike to the stand. The tree stand was tucked back in from a small wet clearing and secured to an 8-foot spruce. Fully camouflaged by natural vegetation and dark from the shade of trees, I was almost invisible. After a few hours, a boar came into the greasy bait that was set days ahead of time, but he stayed in the tree line not offering any type of ethical shot with an arrow, so I waited. According to my Garmin watch that tracks many activities including heart rate, my heart rate spiked from 61 bpm to 150 bpm within a second. My shivering legs told me that the adrenaline was pumping at the sight of the bruin. He slowly started to walk off the way he came in so I drew my G5 Quest bow, settled the pin on his vitals and let the arrow fly. The arrow flew under his belly and he jumped up as if stung by a bee and ran off. I figured I had just blew my one chance for a bear with the bow. A clean miss is better than a wounded animal and knowing other bears were in the area, I knocked another arrow. To my surprise, the bear was staring at the arrow on the ground from inside the tree line … he was back! After a few seconds he slowly walked over to the arrow on the ground sniffed it, licked it! and moved into an opening I ranged at 24 yards and he stopped broadside. I once again settled the pin on his vitals, took a deep breath, and let the arrow fly. This time the arrow struck its mark and the G5 Havoc 2 blade expandable did the rest. The odds of a second chance on the same bear is rare, but Jack was watching. I waited an hour to get down out of the stand and start tracking. I picked up the 1st arrow and easily found the broken off part of the second. Just 30 yards away, in the direction the bear ran, I could see a black mound that was my second chance bear.

I highly recommend hunting bear or moose with Oak Mountain Lodge Outfitters and Buckaroo. The lodge is a vacation home and the surrounding area is beautiful. Once my bear was processed and meat packed for coming home, we went into Alma and enjoyed the scenery as well as a fresh lobster, halibut, fried clam, and scallop dinner. You can contact Buckaroo at www.oakmountainlodgeoutfitters.com or call (506) 855-4131.