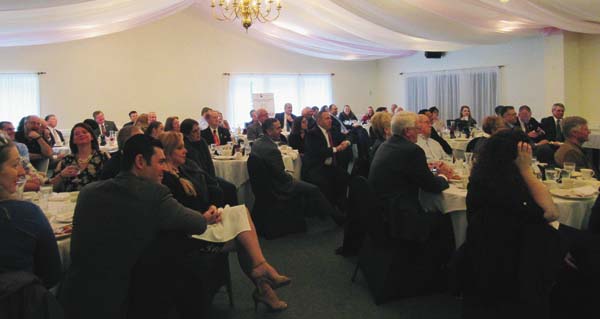 Attendees of the Legislative breakfast listen in during the event. (The Leader-Herald/Kerry Minor)

PERTH — State representatives from Fulton and Montgomery counties got a chance to speak with leaders of county government, businesses and educational institutions during firsts of its kind event put on by the Fulton-Montgomery Regional Chamber of Commerce.

Jack Scott, owner of WENT Radio was the moderator for the discussion, which saw all three legislators answer questions on a variety of topics.

The first topic of discussion was the New York state Scaffold Law, which was enacted in 1885 before workers’ compensation statuses were passed. New York state is the only state that still has this law. It allows workers to be compensated for on-the-job injuries. 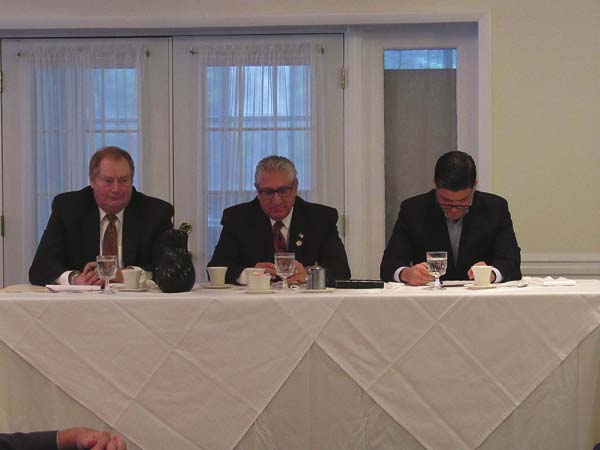 From left: Assemblyman Marc Butler, state Sen. James Tedisco and state Senator George Amedore await their question and answer session during the Legislative Breakfast at the Bridge Walk in Perth on Thursday. The event was presented by the Fulton Montgomery Chamber of Commerce's Governmental Affairs Committee. (The Leader-Herald/Kerry Minor)

Scott said the law holds contractors or property owners at fault even if the employee did not follow safety rules or was acting carelessly and even if the employee is under the influence of alcohol and drugs. New York’s general liability insurance cost the highest in the nation. It cost New York tax payers $800 million dollars annually. The law affects construction industry, government, affordable housing groups, school boards and habitat for humanity. Last year Don McDonald came out with a bill making changes to the law.

“Will all of you commit 100 percent to supporting this?” Scott asked of the propose legislation.

Assemblyman Butler who is co-sponsor on the piece of legislation said he fully supports the bill.

He said these are two issues that need to be addressed. There were changes to the workers compensation law.

“Scaffolding Law and workers compensation are the two consistent issues that we hear complaints from all over our employers,” Butler said. 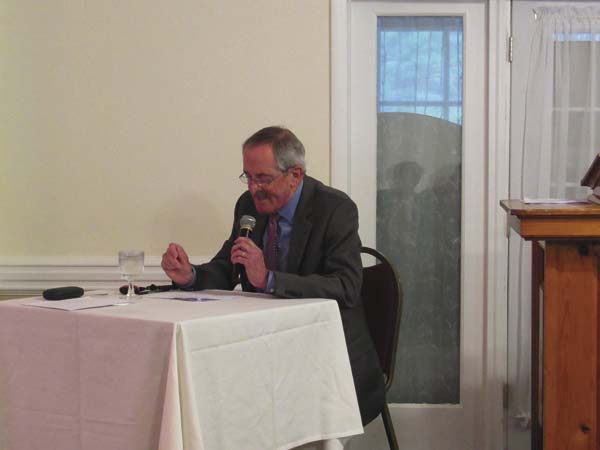 WENT Radio's Jack Scott was moderator for the event. (The Leader-Herald/Kerry Minor)

Tedisco said if individuals are not responsible as workers when bosses give every opportunity to respect the safety and the rule, workers have a liability. He said the Scaffolding Law is one of the things that holds New York back.

“Its almost to a point where they can’t get liability insurance now,” Tedisco said. “It’s become a monopoly almost.”

“It’s not easy to be an employer in New York,” Amedore said. “We love New York, but can’t afford New York.”

Scott then spoke on the Hamilton-Fulton Montgomery Board of Cooperative Educational Services Pathways in Technology Early College High School program which sees high school students be able to obtain an associate’s degree at the same time as their high school diploma. 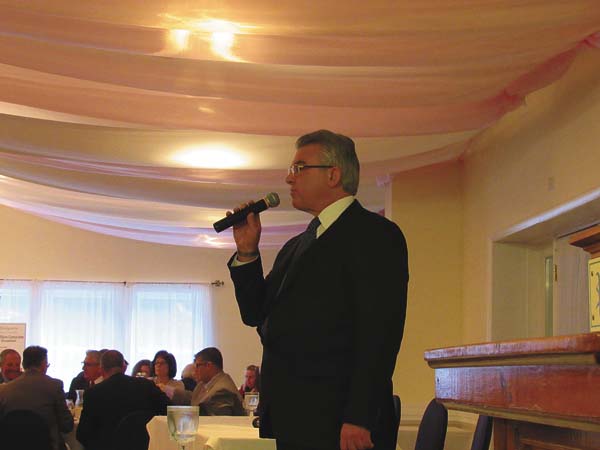 President and CEO of the Fulton Montgomery Regional Chamber of Commerce Mark Kilmer welcomes attendees to the 2017 Legislative Breakfast at The Bridge Walk in Perth. (The Leader-Herald/Kerry Minor)

“Will you commit to aggressively support continue funding of P-Tech and bring this valuable concept into our local high schools?” Scott asked.

Tedisco said he would support continued funding of the program. He said it’s an “unbelievable program.”

“It’s a innovative approach to teaching in schools, but also workforce involved with mentoring and all those types of programs that are maybe outside programs inside of school, hands-on programs.”

Amedore spoke on visiting Germany and their vocational education successes. He said yes to making sure funding for the P-Tech program is permanent.

“Why not start allowing our students to work with their hands, their mind and a little bit of back muscle in the classroom to make learning experience three-dimensional and not just continue to teach a test, but they’re creating something,” Amedore said.

“I sincerely believe that your environment influences your ability to succeed,” Butler said.

The third question was on workers compensation and the state budget and what can be done about it.

Amedore said workers compensation was not part of the governor’s proposal in last year’s budget. He said it became a budget issue during the process of negotiating the budget because of the senate majority conference.

“I fought hard to get workers compensation reformed,”Amedore said.

Tedisco said it’s small businesses are the answer that will move the state out of the small recession.

“We’re here to move the obstacles, or help to do that for every single citizen in this room and the 19 and a half billion people in New York state, so you and they can be everything they can be with the god given talents they’ve been given,” Tedisco said. “We’ve got bureaucrats in the state which for some reason want to create busy jobs for themselves. They don’t want to remove obstacles. They want to create obstacles.”

Question four was on state mandates. “Will you and how will you commit to alleviating this situation for our local residents?” Scott asked.

Butler said Medicaid is the mother of all mandates. He said medicaid costs are higher in New York than any other states.

Tedisco spoke on the governor. He said he feels the governor doesn’t like to play well with others sometimes. He said “nothing but crickets” came out of the commission for the mandate relief the governor came up with.

The last question was on highway taxes. “Are you in favor to repeal?” Scott asked.

All three said they were in favor to repeal of highway taxes in the state.

Butler said if a grocery store must raise prices to make shipments, the cost will often be passed onto the consumer, costing them more money.

Chamber President Mark Kilmer said this was the first time this event was being held. He said there are plans to make this an annual event.

“I think with everything else when you ask people in elected positions, sometimes you get a little bit of a run-around. I think they very honestly said they are in favor of our initiatives here and they see that they see the need for reform,” Kilmer said. “I do agree that it’s hard. You’re working with Albany, working with downstate, upstate, it’s a very complicated state in terms of demographics, but we have to make it work.”

DSS back to almost full staffing

JOHNSTOWN — The Fulton County Department of Social Services — the county’s largest department — is back to ...

JOHNSTOWN — The Fulton County Solid Waste Department has submitted one of its smallest ever proposed capital ... 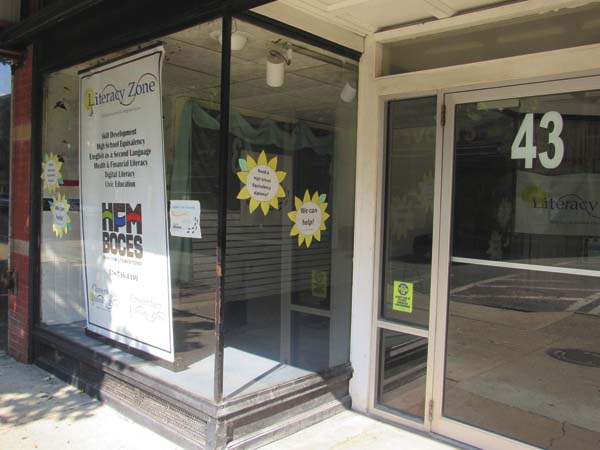 Caroga Board to hold Zoom meeting

DSS back to almost full staffing