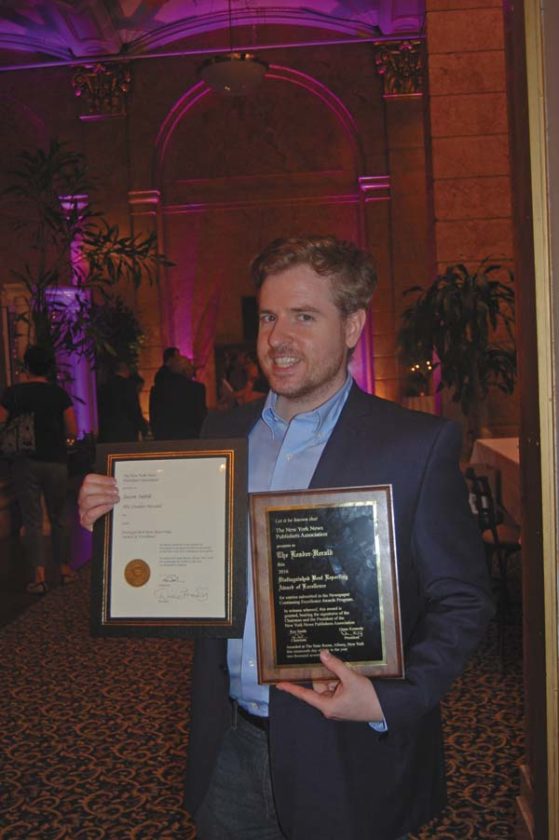 Jason Subik displays the 2016 Distinguished Beat Reporting Award of Excellence from the New York News Publishers Association Wednesday at the State Room banquet hall in Albany. (Photo by Spencer Tulis for the Leader-Herald)

Subik won his award for his three-part “Bedbugs: A community problem” series. He won for newspapers in the under 10,000 circulation class.

The series ran Oct. 30 through Nov. 1 and examined the proliferation of bedbugs in Gloversville.

According to a NYNPA release, winning entries in the category Distinguished Beat Reporting must “demonstrate sustained and knowledgeable coverage of a particular subject or activity of local interest.”

Subik received his award at the at the Continuing Excellence Banquet and Reception Wednesday night at The State Room in Albany.

“We had known about the bed bug problem for awhile,” Subik said. “People kept sending us information about the really horrific situation some of them were trapped in as residents of the Gloversville Housing Authority, being forced to go through multiple treatments of their apartments, having to repeatedly launder all of their belongings, throw out furniture and also the pain and irritation of being bit by the bugs themselves. [The editor] decided the paper needed to devote some resources to telling the story of these people and to explaining the big picture of why bedbugs have returned and spread through rental units in Gloversville, so they gave me the time to do the best job we could possibly do and ultimately this award was the result.”