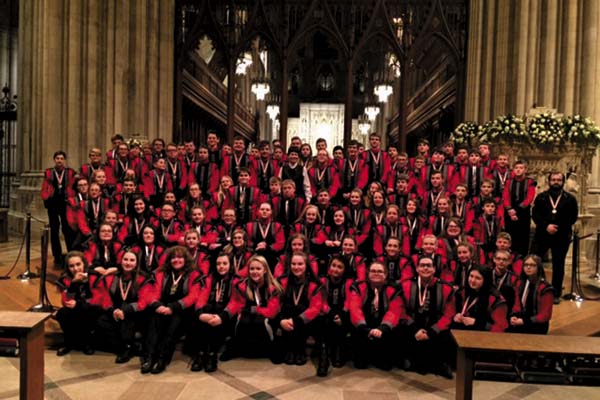 OESJ band members, with director DiAnne Mott, pose for a photo at the Washington National Cathedral, one of three venues where they played prior to Donald Trump’s inauguration. (Photo submitted)

ST. JOHNSVILLE — The Oppenheim-Ephratah-St. Johnsville Central School District made its mark on history last week as its band performed in Washington, D.C. during the days leading up to President Donald Trump’s inauguration.

Band Director DiAnne Mott said the trip was like a “vacation on steroids” and she knew the band students realized how important the trip was.

“What they were doing, actually, became a part of history,” Mott said. “They are a part of the next generation and a part of the peaceful demonstration while others in D.C. were protesting. The kids were just celebrating, maybe not who was in office, but the fact of and the process of how our democracy works.”

The band played three separate performances in the three days leading up to the inauguration. Mott said the kids — more than 100 in all — realized how special their performances were as their mindset evolved and they truly grasped what they were a part of.

“It was so awesome because we did the lunch cruise on the Delaware, which I thought would be their favorite, but their high point was how much they appreciated their own performances. To see that in this day in age, that’s awesome,” Mott said.

Jeff Baker, a senior trumpet player, said the whole band was honored by the trip.

“My favorite part, personally, and I think I speak for the majority of the band, was the Washington National Cathedral. The monuments were cool as well, but the cathedral was just so big and unlike anything anyone has ever seen,” Baker said.

Baker said the band even left a note for Trump as they had planned. He said Mott, through the sound engineer at the cathedral, discovered the exact seat where Trump would be sitting. So the band left a note on his chair.

“We left the concert program with all the kids names on it and they wrote a note special to him,” Mott said. “We don’t know if he got it or not but it was really cool.”

Baker said on the bus ride to Washington, as they traveled along the East Coast, a student gave a self-guided tour of the important landmarks as they passed them. Baker said the band was notified that a student would be sharing the landmarks’ history on the drive down, but hearing it, rather than just passing the landmarks, was special, he said.

“We’re driving through Washington D.C. and Baltimore, past all these historical place,s and to see all of it is cool, but if you don’t know anything about it, then it’s not what it could be,” Baker said.

Mott said as the students started to get a thirst for historic information, what they were doing started to mean something more to them.

“Everything there [D.C.] has meaning and is connected because of the decisions made over the last 100 years, and those choices really do impact today, right down to how the vote came out,” Mott said.

To honor the students and the performances they put on, Mott handed out individual medals while at the cathedral. Mott became band director about 18 months ago, and when she did, she wasn’t sure if the students would like her or not. She said that one day, she came home from school, sat down at a piano and started to write a song.

That same song, called “Shine On Me,” became the tune that was playing as the kids walked down the aisle at the cathedral to receive their medal.

“I wanted them to have the experience that was their moment, their aisle, their national stage. It’s an experience that no one can replace and you could just see it on their faces that they knew they shared a moment,” Mott said.

However, the band’s trip didn’t stop when they returned home. Arriving in town at 11:15 p.m. Mott was surprised to see hundreds of people welcoming them.

Dave Halloram, superintendent of the school district, said there were over seven different fire companies and police that escorted the band buses into the village.

“There were many people there to show their support and pride for the band,” Halloran said. “By all accounts, it was a memorable trip for the students. They appreciated the significance of the moment and were proud to be a part of history.”

Baker shared the same thoughts as he said coming home to a parade was awesome.

“Just to know that we have such strong support and backing from the community, it means a lot. After going on a long trip and coming home, everyone was tired. But when we came home and saw everyone it was re-energizing to know that everyone is so supportive of what you’ve done,” Baker said.

Opal Jessica Bogdan covers rural Fulton County and can be reached at obogdan@leaderherald.com.