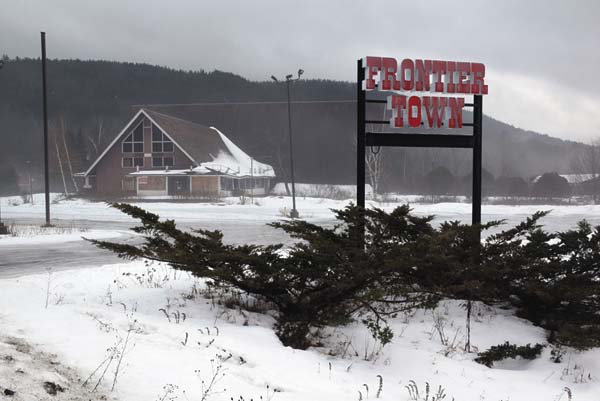 NORTH HUDSON — A “Gateway to the Adirondacks” is planned for the site of the former Frontier Town theme park, thanks to a $32 million state investment proposed by Gov. Andrew Cuomo.

The plan for the 85-acre site at Exit 29 of the Adirondack Northway (Interstate 87) has accelerated over the past eight months. Combined with pending land classifications of Boreas Ponds, Casey Brook and other tracts recently purchased by the state, the gateway could potentially transform wilderness recreation and jolt the economies of long-struggling, lightly populated Adirondack towns such as North Hudson.

“Gov. Cuomo’s goal is to promote and increase the economic vitality of the towns connected to this North Hudson location,” the governor’s office wrote in its State of the State book. “Transforming this site into an attractive destination will link local and regional resources and provide year-round recreation opportunities.”

The new hub would include a visitor information center, a state Department of Environmental Conservation campground and day-use area along the Schroon River, an event center with tourist accommodations and facilities for hosting shows and festivals, areas designated for commercial business development, and historic interactive exhibits about the Adirondack Park. Furthermore, Paradox Brewery, based in Schroon Lake, plans to build a production facility.

As a first step in the proposal, the governor’s office said the DEC will buy a conservation easement on approximately 300 acres of land, using the Environmental Protection Fund. This will allow construction of the campground as well as a DEC equestrian camping and trail riding area, similar to DEC equestrian facilities at Otter Creek and Brookfield.

“It’s going to be a true gateway,” said Essex County Board of Supervisors Chairman Randy Preston, who has been intimately involved with developing the plan over the last eight months.

“The master plan is very impressive; it includes camping cabins, yurts, even a rodeo area, and obviously a certain part of it will spur private investment,” Preston, who also is the Wilmington town supervisor, said Thursday. “It’s not a pie-in-the-sky plan. This is something that’s really going to happen. As far as it being a true welcome center, I do believe this is the absolute perfect fit.”

The wild-west-themed Frontier Town was built in 1952, part of a wave of roadside attractions in the Adirondacks, and has been closed since 1998.

Cuomo claims Wednesday’s proposal stems in part from a challenge he issued to the Open Space Institute and the so-called “Five Towns” around Exit 29 — Minerva, Newcomb, North Hudson, Indian Lake and Long Lake — to design a blueprint for a new recreation hub at Frontier Town.

Preston said the idea was hatched thanks to the vision of a DEC employee, whom he declined to name. A message left Thursday for DEC spokespeople in Albany was not immediately returned.

“It started out, quite frankly, ‘That would be a great place for a campsite,'” Preston said.

The footprint of this Adirondack gateway would be 85 acres the county owns behind Frontier Town’s recognizable A-frame structure that is viewable from the Northway.

Preston said he expects the nostalgic theme of Frontier Town to play into the new welcome center, but to what extent is still to be decided. He added that there is “extreme” interest in keeping its old rodeo areas for events, as well as its chapel, covered bridge and mill. Some of these are still relatively intact, but some would need to be rebuilt, he said.

Preston said the next phase of the plan, which is ongoing, is to address water and sewage plans for the site.

“It’s amazing that everything is coming together,” Preston said. “It’s obvious the governor cares very dearly about the Adirondacks and Essex County.”

The property the A-frame building sits on is still owned by the George Moore family of Keeseville, Preston said. Moore was the high bidder, at $49,500, on four former Frontier Town parcels at a county tax auction in 2014, but the county, at the town of North Hudson’s request, rejected most of the sales. Moore sued, but a state judge sided with the county. Moore died in April 2015, and the parcel he owned passed to his family. Meanwhile, North Hudson voters rejected a ballot proposal for the town to buy the land, so it remained with the county.

Paradox Brewery plans to invest $2.8 million to expand its operations at the site, with help from a $200,000 incentive from the Empire State Development Corporation.

“I see a very large production brewery canning our beer and sending it out, and we would love to see festivals and large summer concerts on the property,” said Paul Mrocka, who owns the brewery along with his wife Joan. “We maybe could have an Adirondack beer festival — with the ability to have camping on that area by the road. There’s just so much I think we can do with the gateway site.”

Outside the Frontier Town footprint, the gateway could become a major feeder location for backcountry trips, pending the classification of land tracts such as the hotly contested Boreas Ponds.

The Adirondack Council and Adirondack Mountain Club environmental groups have proposed the Be Wild NY plan that calls for the High Peaks Wilderness Area to be expanded eastward, toward Frontier Town, to total 280,000 acres including much of the Boreas Ponds tract. Council spokesman John Sheehan said Thursday said his group thinks the Exit 29 gateway would “go hand in hand” with that.

“An expansion that brings the High Peaks right to the edge of the Northway is going to make that intersection very attractive,” Sheehan said. He noted that High Peaks trailheads were crowded this year, showing the potential for recreational tourism.

Sheehan added that the Council would like to see ample parking and shuttling of visitors from the gateway to locations throughout the High Peaks and the rest of the Adirondacks.

Neil Woodworth, executive director of the Adirondack Mountain Club, stressed the importance of the gateway as a “front-country” facility to introduce visitors to areas of the wilderness off both exits 30 and 29.

“Right now, Exit 29 is going to be the gateway to all the new lands,” he said. “The MacIntyre East and West, Boreas Ponds (and) Casey Brook (tracts) — our vision is that most of that will become wilderness. It may over time become as popular as the northern access points to the High Peaks.”

Jim McKenna, CEO of the Lake Placid-based Regional Office of Sustainable Tourism, said the proposed development at Exit 29 would complement rather than divert traffic from the Lake Placid area. He said he views the plan as the primary economic anchor and “jumping-off point” for the Five Towns.

“The biggest challenge for the Five Towns has always been a lack of hospitality business,” McKenna said. “I see this as sort of the beginning of a turnaround for the Five Towns. People both heading north and south on the Northway will be able to stop there, and that gives all the regions that ROOST represents a promotion of assets we never had before.”