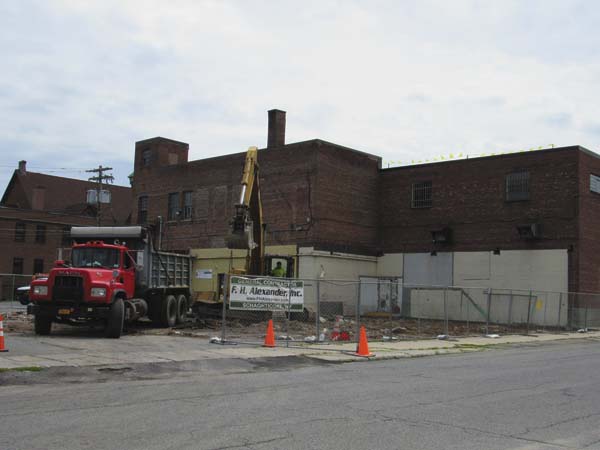 A garage formerly located behind the Fulton County Center for Regional Growth building at 34 W. Fulton St. in Gloversville has been demolished to make way for additional parking. (The Leader-Herald/Ashley Onyon)

GLOVERSVILLE — City officials plan to explore the potential cost savings of contracting out regular trash collection that is currently performed in-house by the Department of Public Works.

Officials say no DPW positions would be cut through layoffs if trash collection is ultimately privatized.

Currently six DPW staff members are assigned full-time to perform only trash collection that is provided across the city over the course of four days each week. To facilitate collection, the city must supply and maintain a high mileage fleet of garbage trucks to convey refuse to the Fulton County landfill for disposal.

Additionally, DeSantis noted that the county charges the city $33 a ton for the disposal of waste at the landfill. In 2019 the city hauled a total of 5,386 tons of waste to the landfill, incurring a tipping fee of approximately $177,000.

The 579 tons of refuse collected in dumpsters by the city in 2019 during bulk drop-off weekends at the city transfer station were not included in the calculations, according to DeSantis.

Participation in the county recycling program that sees recyclables collected across the city by the county twice a month resulted in the collection of 496 tons of materials in 2019.

The county collects the materials at a rate of $30 a ton, resulting in a cost of approximately $15,000 to the city last year.

Reviewing the disposal fees along with in-house labor and equipment cost estimates provided by DPW Director Christopher Perry, DeSantis pointed to the possibility that privatizing the service could result in a cost savings to the city and signaled his interest in issuing a request for proposals for trash collection.

“We have no idea as to whether privatization of that process would be a cost savings to the city or not and of course we wouldn’t know that unless we send out an RFP and we get an idea of what the cost would be for a private hauler to do that. There’s a potential considerable amount of savings for the city with respect to daily operations of the DPW,” said DeSantis. “It would be no additional cost to the tax payers.”

In the event the city moved forward with any returned bids, DeSantis stated that contracting out trash collection services would not result in any layoffs among current DPW staffers.

If any staffing reductions were realized in the future as a result of a transition from in-house collection services, the mayor said it would be through attrition only.

The Common Council on Tuesday approved a motion authorizing the city to issue the RFP to determine the cost of contracting out trash collection services by a vote of 6-1, with 4th Ward Councilwoman Ellen Anadio voting against the measure.

Edinburg school board set to meet

EDINBURG — The Edinburg Common School Board of Trustees meeting will be held at 6 p.m. Tuesday at the school, ...

MAYFIELD — The village of Mayfield Board of Trustees meeting will take place at 5 p.m. today via teleconference. ...

BROADALBIN — The following village streets are scheduled for paving today, according to a news release. ¯ ...

Canajoharie board to meet Thursday

CANAJOHARIE — The Canajoharie Central School District Board of Education will hold two meetings — the ...

MAYFIELD — The village of Mayfield Board of Trustees meeting will take place at 5 p.m. Monday via teleconference. ...