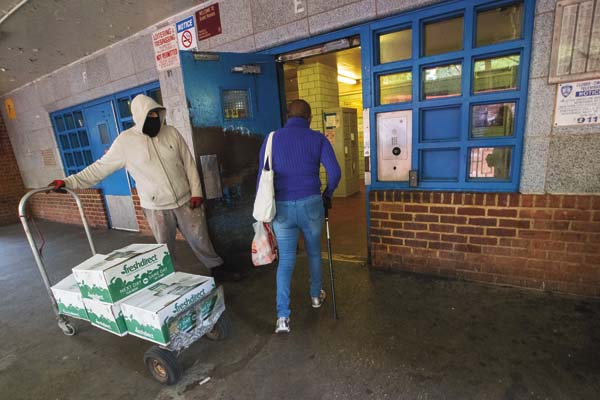 Nico Ramos, left, a volunteer with the Grant Houses Tenant Association, holds the door for a resident as he delivers food to elderly residents of the NYCHA Grant Houses, Monday, May 18, 2020, in the Morningside Heights neighborhood of Manhattan. The new coronavirus causes mild or moderate symptoms for most people, but for some, especially older adults and people with existing health problems, it can cause more severe illness or death. (AP Photo/Mary Altaffer)

NEW YORK (AP) — The coronavirus has cut an unequal path of grief through New York City, hitting hardest in a ring of predominantly poorer, nonwhite neighborhoods a long subway and bus ride from Manhattan, according to data released by the city Monday.

The new accounting of fatalities by neighborhood revealed that the ZIP code with more deaths per capita than any other place in New York is the one that contains Starrett City, a huge complex of apartment towers in Brooklyn that is the largest federally subsidized housing development in the country.

Of the area’s roughly 12,400 residents, 76 have been killed by the virus. Nearly 63 percent of the people living in the ZIP code are black. It is also the ZIP code with the largest percentage of older people in the city, likely a contributing factor in the high fatality rate.

Other areas of the city with unusually high death rates shared some characteristics with the complex, which is in a far-flung part of Brooklyn not far from Kennedy Airport.

Brooklyn’s Coney Island and the Far Rockaway section of Queens both had high fatality rates, as did the northeastern-most parts of the Bronx, including Co-Op City, another huge apartment development upon which Starrett City was modeled.

The data released Monday reinforced earlier revelations that black and Hispanic New Yorkers were both more than twice as likely to be killed by the virus as white people.

And it also showed a direct link between death and poverty.

Jonathan Westin, executive director of New York Communities for Change, a group that advocates for low-income communities, called the disparities devastating. He said Gov. Andrew Cuomo and Mayor Bill de Blasio, both Democrats, could have lessened the impact of the pandemic on the poor.

“It’s a crisis that they haven’t canceled rent for the millions of people who have no jobs or are forced to go to work because they can’t pay their rent and are living in overcrowded situations already and then bring the coronavirus home because they have to work, they have to make rent, they have to live,” Westin said.

COVID-19 has killed at least 16,000 New York City residents, plus another 4,800 whose deaths weren’t immediately confirmed by a lab test.

Here are other coronavirus developments in New York:

Western New York, including the city of Buffalo, met the state’s coronavirus containment goals and can begin to reopen its economy, Cuomo said Monday.

Hospitals will be able to schedule elective surgeries as the region enters the first phase of reopening on Tuesday, but gatherings such as church services and sports events will still be banned, Cuomo said.

Cuomo said he would encourage professional sports leagues to plan reopening without fans in the stands.

Most of upstate New York will have started reopening by the end of this week, but it will likely be weeks before New York City and its suburbs meet metrics for reopening including the availability of hospital beds and the hiring of enough contact tracers to contain the spread of the virus.

As part of the reopening, judges and staff members will return courthouses in 30 upstate counties starting this week, Cuomo said.

The governor said 106 people died of COVID-19 statewide on Sunday, the lowest number since late March.

Cuomo’s own COVID-19 test, taken at his daily briefing on Sunday, was negative, he said.

Here are the latest coronavirus-related developments in New York:

Test kits made in New York

New York City ramped up its ability to test for the coronavirus, with testing available at more than 150 sites citywide and test kits made in the city now in use at city-run health clinics, de Blasio said Monday.

The partnership between the Albert Einstein College of Medicine and local businesses Print Parts and Collab will be producing 60,000 test kits weekly by the week of June 1, de Blasio said. “We’ll keep going as far as we have to go to make sure that every New Yorker who needs a test gets one,” he added.

De Blasio announced Sunday that urgent care provider CityMD would offer tests for the virus at its 123 locations, raising the number of test sites in the city to more than 150.

The mayor said the city is continuing to hire public health workers to trace the contacts of people who test positive for COVID-19.

“All of the pieces — the test kids, the test sites, the labs, the tracers — all of these pieces are coming together to give us the huge, robust test and trace program we need to push back this disease and move forward in this city,” he said.

By CAROLYN THOMPSON The Associated Press New York parents and educators got some long-awaited answers to their ...

By BRIAN SLODYSKO and ANGELIKI KASTANIS The Associated Press WASHINGTON — As much as $273 million in ...

By MARY ESCH Associated Press As colleges around the country grapple with how to reopen in the fall, Cornell ...