The following are the activities of the state Deaprtment of Environmental Conservation from Oct. 14 to 20.

The caller stated his wife walked away from their home sometime in the evening while he was away.

On the evening of Oct. 16, a search crew led by forest ranger John Kennedy located the woman deceased approximately 1.2 miles from her home.

Savarie and forest ranger Scott Jackson responded to the trailheads near Okara Lakes to search for the hiker.

At 4:57 p.m., Savarie and two officers from the Webb Police Department located the 50-year-old hiker from Old Forge. She had been trying to reach Middle Settlement Lake and found herself on the east side of Grass Pond.

The hiker returned to her camp by 5:38 p.m., and search staff were cleared of the scene.

Using specialized search techniques, one of the responding forest rangers and a member of the Schoharie County Search and Rescue team located the hiker at 7:48 p.m.

They escorted the 40-year-old female hiker from Maryland, New York, back to the trailhead and all search staff cleared the scene.

Wilderness rescue: On Oct. 19 at 10:28 a.m., Essex County 911 transferred a call to DEC’s Ray Brook dispatch from a hiker on the Henry’s Woods Trail reporting that her mother, a 61-year-old female from Hamilton, Ontario, had possibly broken her ankle.

Coordinates placed the hikers on the main loop trail about one mile in from the trailhead.

Forest rangers Daniel Fox and Robbi Mecus located the hiker and brought the woman out using an UTV.

At 11:58 a.m., the hikers were out of the woods and advised they would seek further medical attention on their own.

The injured 18-year-old male from Alfred Station, Allegany County, was less than a mile from the St. Regis summit with an unstable lower leg injury.

The hiker reported that he had tripped over tree roots and heard a snap in his ankle.

Six forest rangers responded and were assisted by members of Search and Rescue of the Northern Adirondacks and the Paul Smiths — Gabriels Volunteer Fire Department.

Due to steep terrain and the length of the trail, a nearby camp agreed to give rescuers access to their property to reach the injured hiker’s location and evacuate him via an old fire road.

The first ranger reached the injured hiker at 6:20 p.m. Upon assessment of the injury, the subject’s leg was splinted, and the hiker was packaged into a litter and carried down with backpack carriers.

Once off the steep slope, the litter was attached to a wheel and brought back via the access road.

The hiker was then transported via ranger vehicle off private property to the trailhead at 7:54 p.m. Saranac Lake Rescue transported the subject to a local hospital. 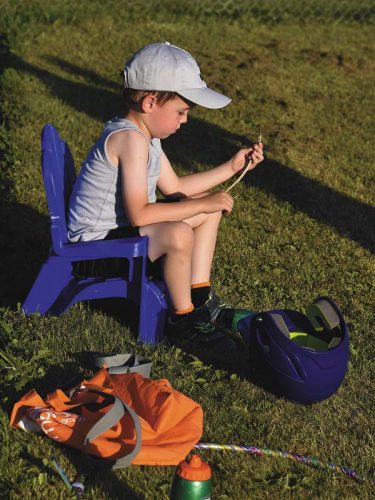