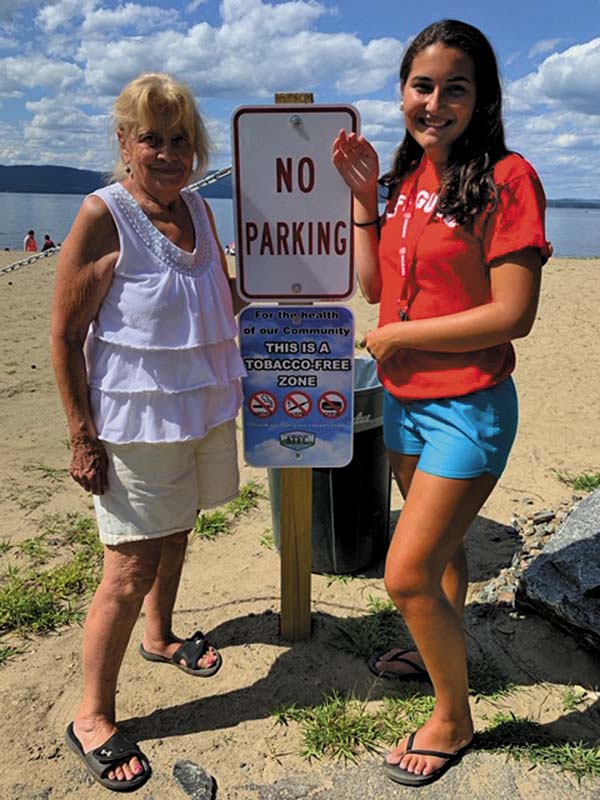 With the tobacco-free policy in effect, no smoking, e-cigarette or tobacco use is allowed on the town beach, she said.

ATFC collaborated with Broadalbin to assist it in the policy implementation. Key to the decision to become a 100 percent tobacco-free beach is the two U.S. Surgeon General reports released in 2006 and 2010. These reports state there is no safe level of exposure to secondhand smoke and that even brief exposure to secondhand smoke can trigger a heart attack in people with pre-existing cardiac conditions.

By going tobacco free, the town is eliminating the proven hazards of secondhand smoke exposure, including lung cancer, heart disease, asthma, breathing difficulties, sinus and bronchial illness. Tobacco use is the leading cause of preventable death and disease in the United States. In fact, diseases caused by secondhand smoke kill about 3,000 New Yorkers each year. Policies prohibiting smoking will help reduce this number over time. By doing so, Broadalbin is ensuring a healthy, clean environment for their residents and visitors.

The town is also reducing the amount of cigarette and tobacco litter at the beach, which is safer for the environment. Cigarettes are the most littered item on Earth with about 4.5 trillion cigarettes discarded each year worldwide. The plastic filters in cigarette filters can take at least nine months — and often times much longer –to degrade. And cigarette butts can leach toxic chemicals such as arsenic and lead into the environment, leading to land, water and air pollution.

Advancing Tobacco-Free Communities of Hamilton, Fulton and Montgomery County offers free assistance for municipalities and business owners who would like to make their parks, playgrounds, beaches, buildings and workplaces tobacco-free.

ATFC is part of a network of statewide contractors funded by the state Department of Health’s Tobacco Control Program, working to change the community environment to support New York State’s tobacco-free norm. Locally the grant is held by Catholic Charities of Fulton and Montgomery. Since 1976 Catholic Charities has served area residents by providing services such as substance abuse prevention, food pantry, domestic violence advocacy and dispute mediation.

The following are the state Department of Environmental Conservation forest ranger actions for the week of Feb. 3 ...