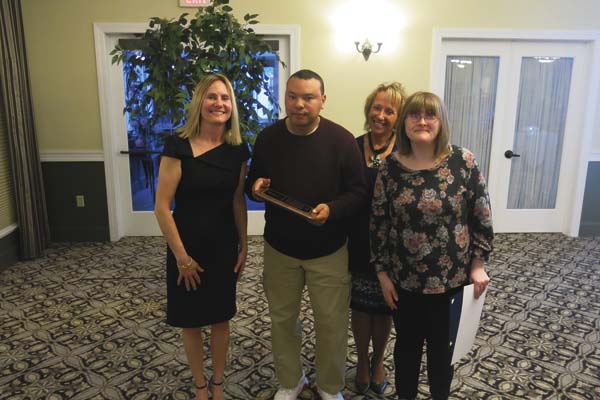 AMSTERDAM — Recipients of the Liberty ARC’s 2019 community partner and community commitment awards were feted at its annual dinner on May 1 at River Stone Manor, according to a news release.

Liberty ARC also recognized their employees of the year. The following outstanding employees were presented:

Special recognition was given to Liberty ARC individuals who have been with the agency for 35 years–Mary Flynn and Scott Whitbeck. 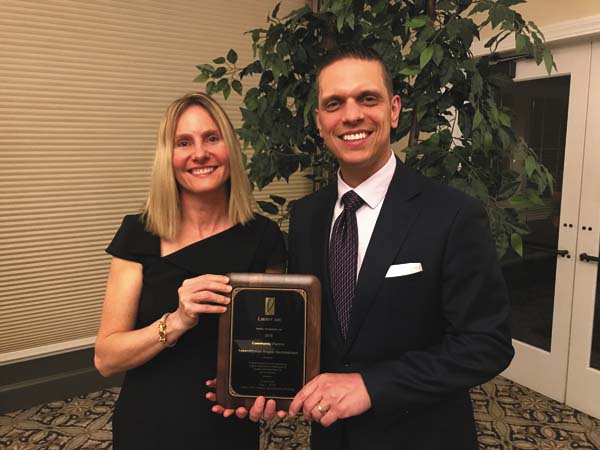 Since being elected to the Assembly in 2012, Santabarbara has shown meaningful support and dedication to Liberty ARC, the release stated.

As a parent raising a son on the autism spectrum as well as serving on the board of directors for the Autism Society of the Greater Capital Region, Santabarbara has a unique understanding of the agency’s mission. This perspective has led him to be a passionate advocate for those with disabilities, as well as the staff that support them.

“Over the past five years, Assemblyman Santabarbara has been a staunch advocate for the bFair2Direct care campaign,” said Liberty ARC CEO Jennifer Saunders.

“Lending his voice to this vital advocacy for fair wages for our direct care staff has been crucial. Assemblyman Santabarbara can always be counted on to be leading the ‘charge’ to ensure this issue is never far from the media’s or governor’s mind.

“He’s always supporting Liberty ARC at our rallies, lobbying with fellow law makers, hosting us on his public access show as well as inviting those we support to visit his offices in Albany.”

“It’s a tremendous honor to receive this recognition from an organization that’s dedicated to helping people with disabilities build independent and fulfilling lives,” said Santabarbara.

“As a father of a son with autism, the work this organization does has significant meaning for me,” he said. “As a state legislator, much of my work has been focused on giving those with disabilities the respect and voice they deserve in our state legislature, and I’m proud to have a great partner like Liberty ARC that’s working towards the same goal.”

The Liberty ARC/Fulton-Montgomery Community Garden Group began in 2012. Since then the group has grown to 35 members and planted, harvested and donated food to numerous, local in-need organizations. The garden, which is located on the grounds of Fulton-Montgomery Community College, was created as a partnership between the college and the agency as a way to provide new collaborative opportunities and to satisfy a common goal — give something back to the community.

Several annual events on the college campus have grown from this partnership including “The Amazing Race,” which is designed every year with disabilities awareness in mind, and “Art in the Garden,” which invites the community to enjoy an evening of art from Liberty ARC artists and to experience what the beautiful garden the club has nurtured.

“These are all great opportunities for individuals to make connections that they otherwise would not have had, and to develop a sense of purpose,” said Liberty ARC COO Candace Opalka.

“They work hard at both, and are very deserving of this year’s award in recognition of their ongoing commitment to providing excellence in gardening and gardening instruction as well as fostering a partnership with FM, and for supporting needs in our community.”

Liberty ARC, a chapter of The Arc New York, was founded in 1957 by parents of children with developmental disabilities who wished to establish special education programs in the local community. For more than 60 years, the organization has provided Montgomery County with top-quality supports and services and has grown to include employment/vocational, recreational, residential, day, family support and health-related services to nearly 580 individuals with physical, developmental and other disabilities.

The scene where a one-car motor vehicle accident occurred is shown on East State Street extension in the town of Johnstown. The driver faces several charges including felony DWI. (The Leader-Herald/Briana O’Hara)

Deep ruts can be seen in the grass on May 2. The field had just been readied for the season. (Photo submitted)

Weatherman John Gray talks to Mayfield students about his book and his adopted dog, Keller, who is blind. (Photo submitted)

SUNY Board of Trustees Vice Chairman Merryl Tisch, second from left, met with students at Fulton-Montgomery Community College on Wednesday to gather feedback as part of a statewide campus tour. (The Leader-Herald/Ashley Onyon)