Local leaders and business officials with the Fulton County Center for Regional Growth's quarterly business tour visit The Local Five and Dine, a restaurant at 132 S. Main St. in Northville that is expected to have a soft opening in March. (The Leader-Herald/Ashley Onyon)

Co-owner Brian Correll shows off the recently renovated dining area and bar of The Local Five and Dine in Northville during the Fulton County Center for Regional Growth’s quarterly business tour. (The Leader-Herald/Ashley Onyon)

Co-owner Brian Correll shows off the recently renovated kitchen of The Local Five and Dine in Northville during the Fulton County Center for Regional Growth’s quarterly business tour. (The Leader-Herald/Ashley Onyon)

NORTHVILLE — Just a few years ago the Northville Five and Dime Store was losing money competing against super stores, pharmacies and modern dollar stores that sprang from the business model originated by five and dime shops that were popular around the country in the early 20th century.

“It was ironic,” recalled co-owner Brian Correll while leading a group of local leaders and business officials through the Five and Dime at 122 S. Main St. and The Local Five and Dine soon to open at 132 S. Main St. during the Fulton County Center for Regional Growth’s quarterly business tour.

He and wife Susan Correll were considering selling the business her family had owned for decades around the same time that Dollar General proposed opening a location in the village. Opposition from village residents concerned that the chain store would hurt the Five and Dime ultimately defeated the proposal and convinced the Corrells that they needed to do something to save the store.

“People didn’t want the Dollar General in order to support the Five and Dime, they didn’t realize we were thinking of closing,” said Brian Correll.

The couple began visiting other surviving and often thriving five and dime stores around the country to gather ideas to improve their own store. A tip of the hat to the merchandise traditionally carried in the shops was common, leading the Corrells to introduce homemade fudge, old fashioned penny and novelty candies and vintage style toys and goods. 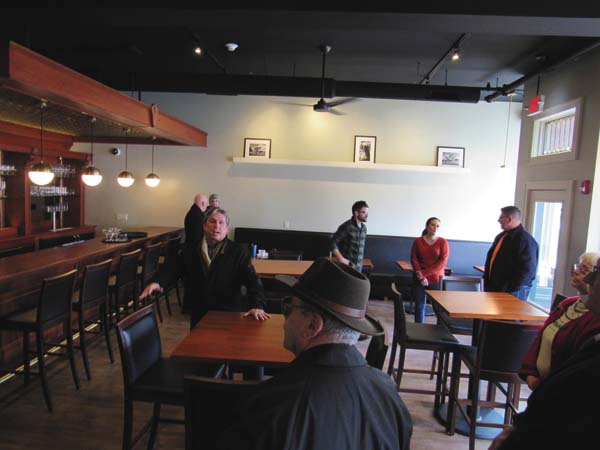 Co-owner Brian Correll shows off the recently renovated dining area and bar of The Local Five and Dine in Northville during the Fulton County Center for Regional Growth's quarterly business tour. (The Leader-Herald/Ashley Onyon)

Modern touches were also common in the form of clothing and items related to the region, leading the Corrells to expand their selection of clothing, fishing and camping items.

Perhaps most common was the marketing of the long running shops as historic businesses, a visit to one store that opened in 1915 advertised as the oldest five and dime in the country got Brian Correll thinking about the history of the Northville Five and Dime that opened at its current location in 1914.

Further research revealed another five and dime in West Virginia that was established in 1908, all but dashing Brian Correll’s hopes of advertising the village shop as the oldest in the nation. But talking to the village historian, Brian Correll learned that the business started as the R. G. Dewitt Co. General Store was actually established in 1907 and later relocated to the building where the Northville Five and Dime Store still operates today.

“We are the oldest five and dime in the country,” he said.

As the Corrells rolled out plans to improve and market the Northville Five and Dime they began thinking about expanding to the second floor to increase their retail space and began pursuing a $500,000 Main Street Grant through the state Division of Housing and Community Renewal at the suggestion of Mayor John Spaeth. 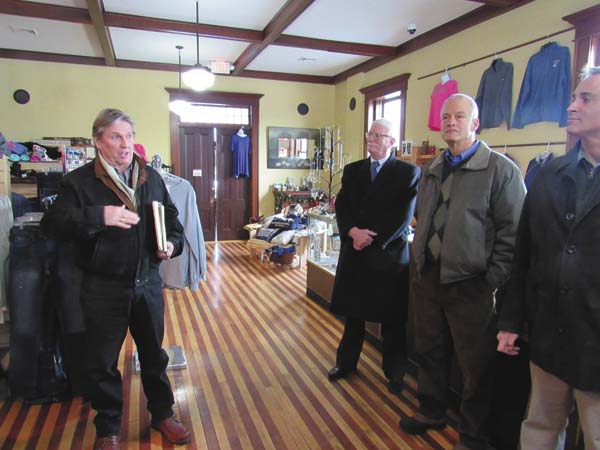 A grant application submitted with the assistance of the CRG proved successful and renovations got underway in 2017. Mid-way through 2017 the Corrells also purchased the building next door at 132 S. Main St. originally eyeing the space for a tea room before deciding to open a restaurant on the ground floor with office space and an apartment on the second floor.

Renovations at the Northville Five and Dime are now complete and work next door is nearing completion.

Renovations at the Five and Dime included the installation of a handicap accessible staircase with lift chairs running along the wall, window replacements and improvements to the building’s insulation, refinishing of the original wood floor on the second story to reveal alternating cherry and maple timbers and the installation of a new heating system.

Also installed on the second floor were a new restroom, changing room, office space and lighting fixtures replicating one of the building’s surviving original fixtures. 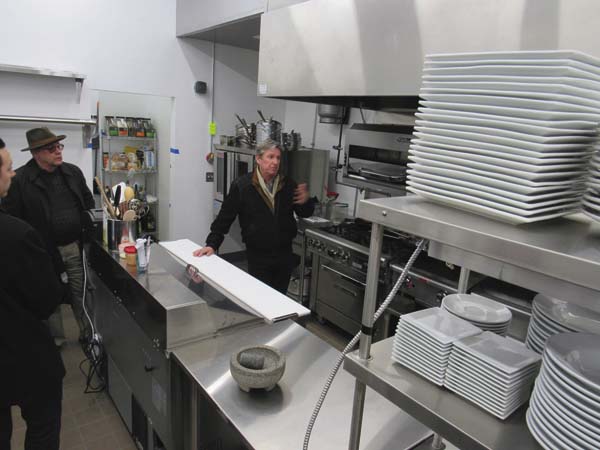 Co-owner Brian Correll shows off the recently renovated kitchen of The Local Five and Dine in Northville during the Fulton County Center for Regional Growth's quarterly business tour. (The Leader-Herald/Ashley Onyon)

The second floor features mostly clothing for children and women along with books, toys and jewelry. Renovations expanded retail space at the Five and Dime by about 3,000 square feet and have contributed to a nearly 50 percent increase to the store’s revenue since their completion, said Brian Correll.

The Corrells plan to expand retail space further in the future when renovations are completed next door by relocating the office currently on the second floor of the Five and Dime to the other building.

Heading outside Brian Correll showed off the newly painted facades of both buildings. Much of the work at 132 S. Main St. will go unnoticed to visitors in the form of new wiring, plumbing, septic system and the installation of steel beams to reinforce and straighten the leaning building.

“That building would have fallen down,” he said. “There was a six to eight inch gap between the buildings.

Inside The Local Five and Dine, the restaurant is nearly finished with a classic styled dining area, soft seating in a cafe area and bar ready to receive patrons. The focal point bar featuring an antiqued glass mirror was constructed by a local woodworker in the image of an antique piece the Corrells purchased that will serve as a maitre d’ station.

“It turned out beautifully,” commented CRG Board of Directors member Kent Kirch taking in the space. “I’m just so impressed.”

A sleek modern kitchen at the rear features all new appliances, cookware and dishes. A walk in cooler was installed in the basement for food storage.

The Five and Dine will likely be open seven days a week serving breakfast, lunch and dinner, filling a need for restaurants in the village. The restaurant will be managed by Geoffry Hoffman and Susan Correll’s daughter, Nicole Sikorski, a part owner who is also managing the Five and Dime. Serving as chef will be Evan Luey who has been testing out various dishes in recent weeks developing the menu with input from the Corrells, Sikorski and Hoffman.

“It will be something a little different,” he said. “It will be good food, but not the kind of stuff you would make at home.”

Tom Wood of Timeless Tavern has been encouraging, he added, sharing advice and tips with the fledgling restaurateurs and suggesting they try to open before he takes a vacation later this year.

A soft opening is eyed for March and Brian Correll said the restaurant will likely begin by reservation only to control initial customer volumes at about a third of the establishment’s capacity.

“You have one chance to make a good impression,” he explained. “We don’t want to be overwhelmed.”

Multiple tour goers said they would be in for a meal as soon as the Five and Dine opens, saying that the restaurant will be a hit. Brian Correll said he and his wife are most concerned with creating establishments that their grandchildren can one day take over.

“This is going to end up being a tourist destination, said CRG President and CEO Ronald Peters.