A place for Toying Around 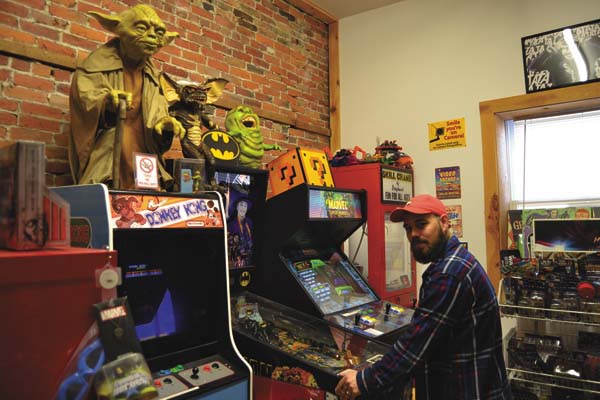 Toys are shown here on display at Toying Around, located at 17 W. Main St. in Johnstown on Wednesday. (The Leader-Herald/Josh Bovee)

Comic books and toys are shown here on display at Toying Around, located at 17 W. Main St. in Johnstown on Wednesday. (The Leader-Herald/Josh Bovee)

Prints and and hoodies designed by Vincent McCallum, owner of Toying Around, are shown here on display at the business, located at 17 W. Main St. in Johnstown on Wednesday. (The Leader-Herald/Josh Bovee)

Prints designed by Vincent McCallum, owner of Toying Around, are shown here on display at Toying Around, located at 17 W. Main St. in Johnstown on Wednesday. (The Leader-Herald/Josh Bovee)

A lifesize Clark Kent/Superman figure is shown behind the counter, surrounded by toys at Toying Around on Wednesday. (The Leader-Herald/Josh Bovee)

JOHNSTOWN — From Luke Skywalker and Darth Vader to Batman and the Joker, everyone seems to have a favorite hero or villain from a movie or comic book. Whatever your preference is in the pantheon of hooded outlaws and masked avengers there is a place where all can come together to revel in the lore of their chosen saga.

Toying Around, located at 17 W. Main St. in the city, is chock full with enough new and vintage toys, video games, comic books, posters, Pop Vinyls and other memorabilia to keep fans busy for hours exploring the seemingly endless trove of goods. There’s even a small arcade in the back featuring dozens of classic games like Donkey Kong and Pac-Man.

“If there’s a niche for it, we try to specialize in it,” Vincent McCallum, mastermind behind Toying Around, said Wednesday. “It’s definitely a mixture of a little of everything. When a new line from a movie comes out — say for [Avengers:] Infinity War — we’ll definitely stock up on a lot of that new product. But then again, there is that big boost in retro toys and there’s a new audience that’s being introduced to that. They have a new nostalgia for the vintage. So we’re always trying to make sure that we grasp our hands in a little bit of everything.”

In addition, Toying Around also features T-shirts, hoodies and prints featuring comic -and movie-inspired artwork designed by McCallum himself.

“I like to do parodies on original comic book covers and movie posters. I like it loud is the best way to say it. When you see my shirts, they’re loud, they’re expressive,” McCallum said. “Usually when we’re at events, that’s what we sell the most of, a lot of the clothing. And when we come to the events we see people wearing the clothing and it’s just a cool feeling. And sometimes they don’t even know it’s me who made it. I remember once we were in Lake George just for the weekend and I saw someone wearing a hoodie and I had to stop them and I was like ‘Hey, I love that hoodie. I designed it.’ And he’s like ‘Are you kidding me?’ And I just had to say how cool it was to see somebody this far away wearing a piece of my clothing. So it’s a cool thing.” 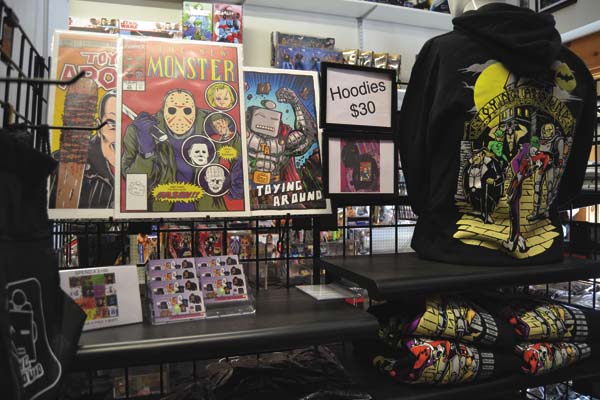 Prints and and hoodies designed by Vincent McCallum, owner of Toying Around, are shown here on display at the business, located at 17 W. Main St. in Johnstown on Wednesday. (The Leader-Herald/Josh Bovee)

McCallum, who opened the doors of Toying Around five years ago, said his father was the inspiration for the store. McCallum began collecting toys and comic books as a way of coping with the passing of his father after a battle with leukemia.

“Losing my dad was a big turn around for me. I dove into comic books really deep to fill that void of not having that idolizing figure. Because my dad was larger than life to me,” McCallum said. “To me he was always the person that helped those before himself, made sure that all his bills were paid and everyone was happy before himself. So those morals [I saw within] the super heroes, and my dad was kind of like a hero in that essence to me. When he passed from leukemia, it really put me on a different trajectory.”

McCallum, who lives in Johnstown with his wife and son, soon found he had more toys and comics than he knew what to do with and decided to try his hand at selling some of the stuff online.

“I got to a point where I had so much I said to myself ‘you know, there are a lot of items in front of me that I don’t necessarily want but I bet you I could help move.’ So I started putting myself in the right place at the right time and getting figures to the right place to the right people that needed them. And it kind of became a business more or less.”

In May of 2014, McCallum rented a space in Johnstown which became the first physical iteration of Toying Around, before moving a year later to its current location on Main Street. In the ensuing five years, McCallum has established a significant following of fellow pop culture enthusiasts. In addition to selling his products online and in his brick and mortar store, McCallum travels to roughly 20 Comic-Cons throughout the northeast to sell and promote his business. 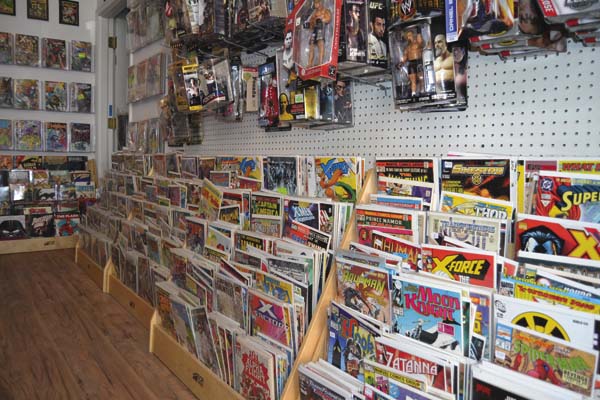 Comic books and toys are shown here on display at Toying Around, located at 17 W. Main St. in Johnstown on Wednesday. (The Leader-Herald/Josh Bovee)

He also has established a significant social media presence, with more than 16,000 followers in Facebook. McCallum credits his social media popularity to keeping things light and giving followers a refuge from the saturation of the 24-hour new cycle, offering instead a place to simply ‘toy around.’

With all the buzz Toying Around has created over the past five years, McCallum and his team are now in the process of bringing their love of Comic Cons into Fulton County for the second year in a row. Toying Around’s Block Party Vol. 2 is scheduled for May 11 at 10 a.m. on Main Street in Johnstown.

“Now our madness is spewing out into the streets so to speak,” McCallum said. “We are spreading it everywhere and the local businesses are getting involved.” 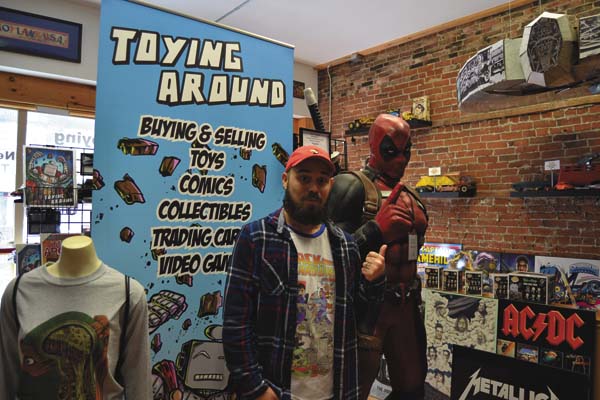 “It’s only been our second year planning this block party but I started planning it at the beginning of this year and it’s been going on for about 5 months working on it non-stop. We’re really trying to make it something people know is happening and you don’t want to miss it,” McCallum said.

In addition to food and vendors, the block party will feature a live DJ and a rock band, as well as a bounce house and a dunk tank which will be filled with water via the local fire department.

“What we’re doing is once we make up the money it took to put the bounce house and dunk tank in, we’re putting all proceeds to the local food pantry for the homeless,” McCallum said. “I try to help out that as much as a can when I can throughout the year. If we get extra soda or a little bit of extra cash that roles in from a good sale, we try to put it back to the food pantry. Because there’s a good, vast amount of people that can benefit from that.”

McCallum said that last year’s Block Party, which was partially hampered by wet weather, drew upwards of 300 people with little or no advertising. With a barrage of advertising going into this year’s block party, McCallum expects to see a much bigger turn out.

“I’d say from what I did last year, I did triple this year. So I hope it’s going to be amazing. We’re hoping for about 3,000 people, maybe more,” McCallum said. “We rented the building next door to fit all the madness we’ve got going on, aside from what’s going on in the streets.” 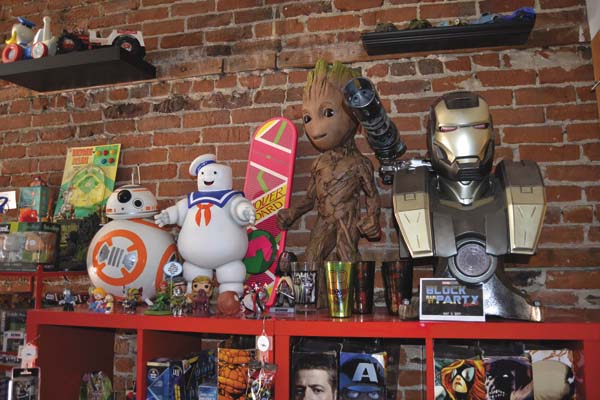 Toys are shown here on display at Toying Around, located at 17 W. Main St. in Johnstown on Wednesday. (The Leader-Herald/Josh Bovee)

Much of the success of Toying Around thus far McCallum attributes to his enthusiasm, which he says “hasn’t died one bit in 5 years.” But still he’s aware that the market for vintage toys and video games is currently at an all-time peak, which is bound to eventually drop off. When that time comes, McCallum said he is prepared to move on, but that his love for what he does will remain.

“As they would say in ‘Infinity War,’ this is not the end game. We do love this, we want to be here forever, but if this is something that does die down, we know when to fold,” McCallum said. “We’re not going to try to hold on when the market’s gone but we do love this. This isn’t something that I’m going to lose my life’s passion over but we’ll always be around in some form or fashion I have a feeling. I’m always looking for the next thing to do.”

But for the time being, McCallum is set on offering something that radiates a nostalgic glow for everyone who walks into his store.

“For anybody who hasn’t been here: parent, grandparent, there is literally something for every generation. If you look, prove my word, there is a girl figure every couple of feet. We do not have just boy toys here. I make sure because I don’t want to hear it’s just a boy store. It’s a story for everybody,”McCallum said.

“If you don’t think you have a reason to stop in, you do,” McCallum continued. “There’s something from your childhood here and you don’t know it that will at least re-stem something for the next generation. And that’s what I love to see. When I’m back here and I see a dad, he’s over here and the son’s over here and he’s like ‘dad look at this.’ And he’s like ‘yeah, but look at his. These are from when I was little.’ And then they both go home and get one together. It’s really the coolest feeling. 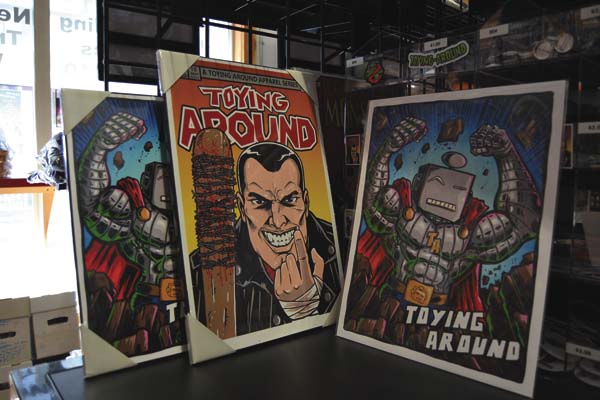 Prints designed by Vincent McCallum, owner of Toying Around, are shown here on display at Toying Around, located at 17 W. Main St. in Johnstown on Wednesday. (The Leader-Herald/Josh Bovee) 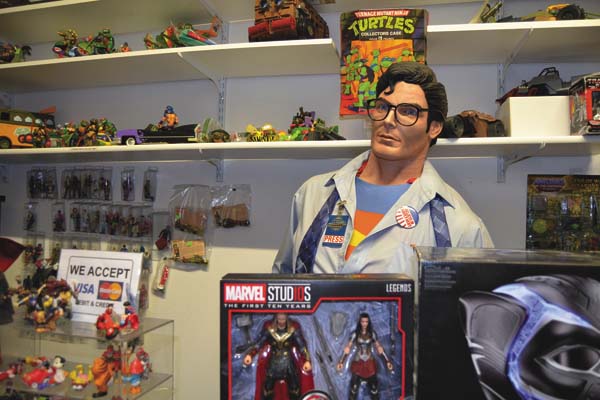 A lifesize Clark Kent/Superman figure is shown behind the counter, surrounded by toys at Toying Around on Wednesday. (The Leader-Herald/Josh Bovee)