With heavy snows on the way, Alpin Haus offers opportunities for skiers young and old 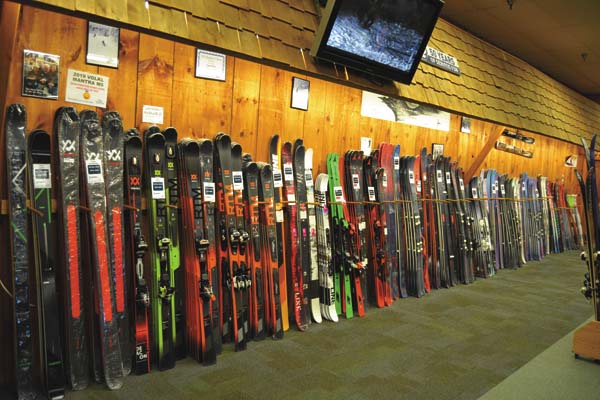 Skis are displayed at the Alpin Haus Ski Shop on Route 30 in Amsterdam on Thursday. (The Leader-Herald/josh Bovee)

AMSTERDAM — With a heavy blanket of snow due to cover much of the region this weekend, there’s bound to be some grumbling as residents head outdoors to shovel driveways and scrape off cars. But all that snow doesn’t have to be just a headache. With the wintry blitz comes fresh opportunities for outdoor fun.

“The conditions this year, believe it or not, have been unbelievable,” said Jamie Georgelos, manager of the Alpin Haus Ski Shop in Amsterdam. “Local mountains, like Royal Mountain, put down over three feet of snow with the man-made snow, so they have an unbelievable base. The natural snow that we’re about to get is only going to enhance that and really just preserve all of the hard work that resorts have done up until now to give us a really long ski season.”

Georgelos said that early snowfalls in November in conjunction with sustained cold temperatures have allowed local ski resorts to establish an excellent snow base, which this weeks added layer will only enhance.

“The natural snow is really just going to overall enhance the mountain. It’s going to open up more terrain and really help reestablish the terrain that’s already got the man made snow. Natural snow, especially a foot or more, is going to make for just and epic ski season,” said Georgelos.

For those ready to set down the shovels and get in on the outdoor fun, Alpin Haus features a vast selection of sporting equipment, including downhill and cross country skis, snowboards and snowshoes, as well as winter clothing — “Everything to keep you having fun out there and also warm,” said Georgelos. 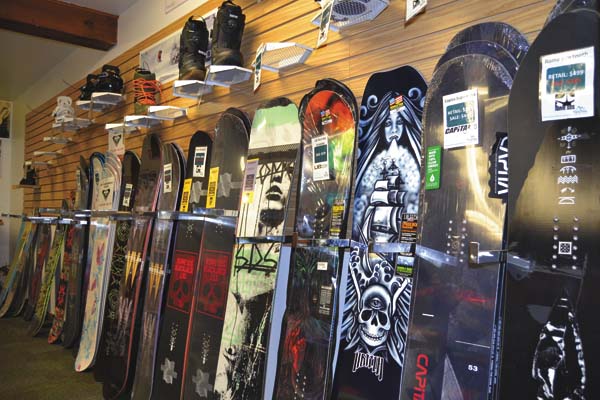 Snowboards on display at the Alpin Haus Ski Shop. (The Leader-Herald/josh Bovee)

In token of his desire to get people out of the house and onto the slopes during the long northeastern winters, in 2014 Alpin Haus founder Bud Heck introduced the Kids Ski for Free program, an initiative that offers children five and younger a free seasonal lease of skis and boots.

“Several years ago, Bud Heck, came up with the idea that he wanted every child to have the opportunity to ski. So he developed a plan that if we offered free skis to every child under five, that that would give them an opportunity to try skiing in hopes that they would enjoy it as much as he does,” Georgelos said.

To take advantage of the Kids Ski for Free program, one need only stop in to the Alpin Haus Ski Shop on Route 30 to be sized and fitted.

“We typically have a kick off sale where we invite people in September and then we offer them all season long,” said Georgelos. “So you basically would just come into our store, we have some paperwork for you to fill out so we can size you appropriately, and we get you all geared up.”

Georgelos said that many children begin learning to ski between the ages of four and six as by that point they have “developed enough to where they can maneuver the skis, but yet they’re not nervous so they seem to gravitate to it very well.” 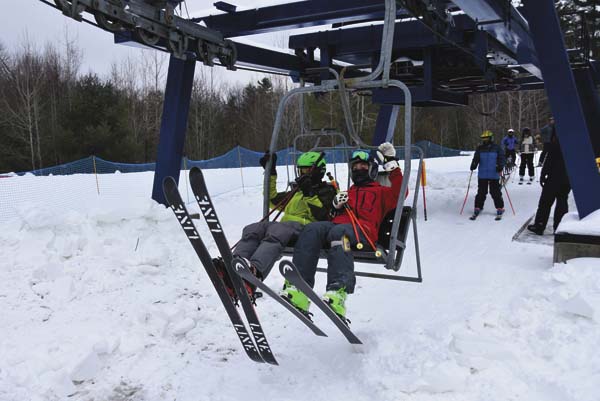 (The Leader-Herald/James A. Ellis) Skiers maker their way up the chair lift on opening day at Royal Mountain

In addition to the Kids Ski for Free program, Alpin Haus offers a junior rental service for kids six and older, and has plans to offer an adult rental service next year, in order to accommodate all age groups and proficiency levels.

“There’s really not too many ‘lifetime sports’ and skiing happens to be one of them, he said. “We’ve had customers that have taken 20 or 30 years off just because of life situations but then they get back into it but they haven’t forgotten. It’s that old adage, ‘once you learn how to ride a bike you just jump back on and go.'”

On Feb. 21, Alpin Haus will host a free demo day at Royal Mountain, where skiers will be able to test out next year’s ski equipment.