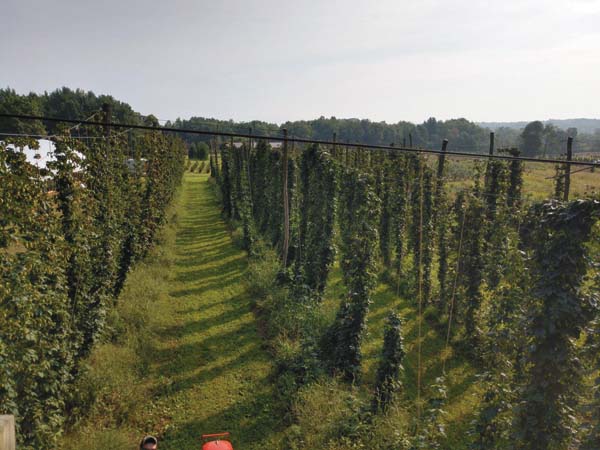 A view inside the Goderie’s tomato greenhouse. (The Leader-Herald/Josh Bovee)

JOHNSTOWN — When the Goderies started growing hops at Goderie’s Tree Farm in 2013, they took much of their inspiration from the Pacific Northwest, as the hop growers in this region have long been at the forefront of commercial hop growing in America. But over several years of honing their ability to produce the potent flowers which help give beer its distinctive bitter flavor, the Goderies realized they were looking in the wrong direction. For answers, they looked instead to Germany and the Hallertau hop region in Bavaria where hops have been grown for centuries.

“Climate-wise it’s just similar in terms of not only the diseases that you’re dealing with but also the nutritional needs of the plant,” Jared Goderie said.

“When this legislation came about, we thought it would be kind of cool to grow hops. And obviously there’s going to be a demand because the craft beverage industry was just taking off. Especially local breweries. So we just kind of said, ‘let’s figure it out,'” Jared said.

Goderies Tree Farm, which is widely known for its Christmas trees, as well as its landscaping services, has continued to diversify over the years, now offering blueberry picking in the summer. They’ve also recently installed a greenhouse for tomatoes. But the decision to grow hops is part of passion for homebrewing, which the Goderies say they’ve been doing for years. 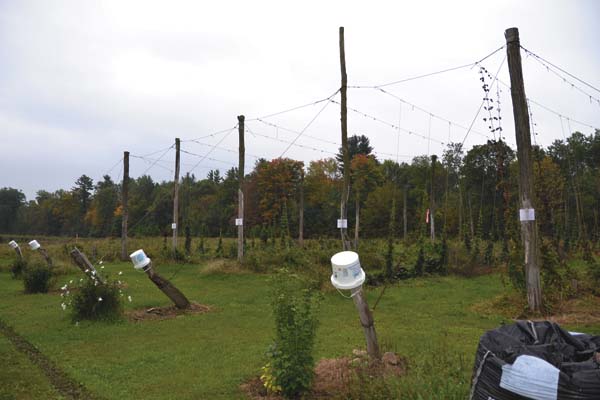 “We had the land available and honestly a lot of the equipment,” Jared said. “In terms of the tractors and stuff, we pretty much had that all in place. There wasn’t an investment in terms of equipment which is why we thought it would be a good move for us.”

But even with the equipment and land readily available, the Goderies ran into numerous obstacles while establishing their hop yard.

“It’s a huge learning curve,” Jared said. ” I could write you a book on how to not start a hop yard. All the mistakes we’ve made. But luckily it wasn’t anything too major and we’ve learned from it and changed it.”

Jared did much of the research into hops before bring it back to Pete and Mike to discuss logistics. They then set to work designing the hop yard itself, for which Jared credits his uncle, Mike Goderie, who he calls “the brains behind the engineering of the hop yard itself.” They also had to design the “hop wagon,” which is essentially tall platform built atop truck axles and pulled along with a tractor.

“That makes it so we can get up there 18 feet in the air and tie ropes to the lines,” Jared said. 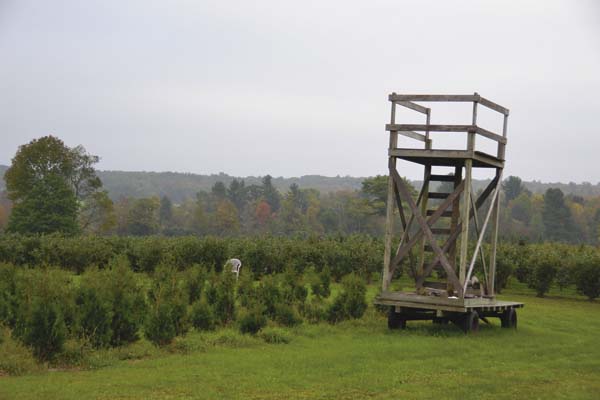 The ropes are used as climbing lines for the hop vines that sprawl out in all directions.

Goderie’s Tree Farm has experimented with different hop varieties over the years but has settled this year on four varieties: Cascade, Chinook, Fuggle and Newport. Hop cones are filled with a yellow substance called lupulin — a resinous powder extracted from the female hops flower which gives beer it’s flavor. Each variety has a slightly different aroma –from piney, to citrusy, to earthy — which in turn change the flavor of the beer.

“Imagine [the hop yard] full at the end of August when it’s about 90 degrees out and the wind blows, that’s all you smell. It’s pretty awesome,” Jared said.

The Goderie’s hop yield this year went entirely to Stump City Brewing in Gloversville and Roger’s Cideryard in Johnstown mostly in the form of wet hops. But the Goderies are slowly making their operation more sophisticated with the implementation of a hop drier which they used for the first time this season.

The lupulin from dried hops is extracted and made into concentrated pellets for brewers to use in their beers. Goderie’s is currently sending out this year’s yield to a third party to be pelletized, but say they may look into doing their own processing in the future.

But for now they are busy adjusting to the learning curve of the complex process of growing hops, while also helping others in the region to understand the process through tours and presentations.

“What we really wanted to do was perfect what we had here and see where the pay out was so that way we could take that and extrapolate it and see if it was going to be a money maker for us,” Jared said. “I think after this year, we could definitely justify expanding on what we’ve got.”