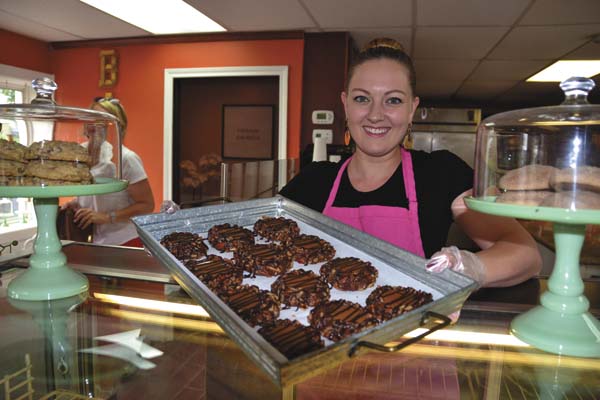 Ashley Tauss of Cravings Bakery in Gloversville hold up a tray of chocolate turtle brownies behind the counter on Thursday. (The Leader-Herald/Josh Bovee)

Ashley Tauss of Cravings Bakery in Gloversville hold up a tray of chocolate turtle brownies behind the counter on Thursday. (The Leader-Herald/Josh Bovee)

A tray of cupcakes on top of the counter for display at Cravings Bakery on Thursday. (The Leader-Herald/Josh Bovee)

A tray of cupcakes sets between two cookie platters on top of the counter for display at Cravings Bakery on Thursday. (The Leader-Herald/Josh Bovee)

Rolling pins hang inside a window in Cravings Bakery, overlooking the Cayadutta creek. (The Leader-Herald/Josh Bovee)

Ashley Tauss holds up a tray of cupcakes inside of her bakery on Thursday. (The Leader-Herald/Josh Bovee)

GLOVERSVILLE — Have a sweet tooth? You’re in luck. There’s a new way to satisfy that craving with Cravings Bakery and Cafe. Located at 87 W. Fulton St. in Gloversville, Cravings Bakery serves everything from specialty cupcakes, chocolate turtle brownies, and cookie dough stuffed cookie sandwiches, all made with enough skill, and of course sugar, to keep even the most serious of sugar zealots satisfied.

“Here at Cravings we have everything for a sweet tooth,” said Ashley Tauss, owner and baker of the sweet confections served at Cravings Bakery.

Cravings Bakery, which has been open for business for just over year, serves treats to walk-in customers on Mondays, Tuesdays, Thursdays, and Fridays from 10 a.m. to 6:30 p.m. and Saturdays from 10 a.m. to 4 p.m. They serve Capital City Roasters coffee from Antonucci’s and serve their hot chocolate with marshmallows, just like Tauss’s grandma used to serve.

In fact, much of the inspiration behind Cravings Bakery comes from Tauss’s grandmothers. Tauss said she grew up baking with both of her grandmothers and through them developed her love of sweet treats and her understanding that it was okay to make a little bit of a mess in pursuit of something grand.

“I grew up baking with both of my grandmas, especially my grandma that lived here locally,” Tauss said. “After school, I would go to her house and that’s what we would do. We would bake. They never were afraid to let me crack the eggs and put the flour in and make a little bit of a mess because it could always be cleaned up.” 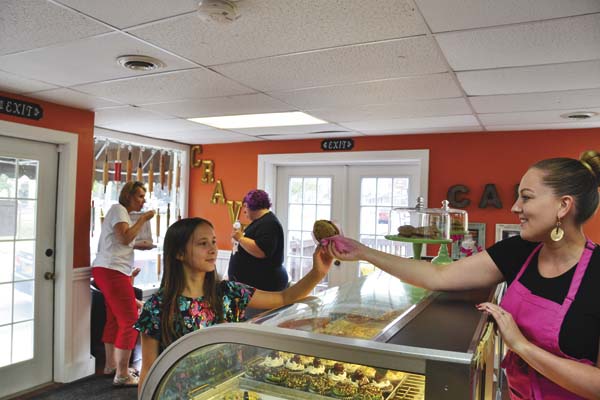 Many of the recipes that Tauss uses come directly from her grandmothers, keeping her family traditions alive while adding her own spin to many of her recipes, though not without the occasional wince at breaking with tradition.

“[Their recipes are] mostly what fill the case here,” Tauss said. “[Grandma’s] oatmeal chocolate chip cookies were her signature thing. I’ve had a lot of people ask me to put raisins instead of chocolate chips and that was like heart breaking to me because it has so much sentimental value.”

While Cravings Bakery does not currently offer alternative options, such as vegan and gluten-free, she is working on ways to satisfy all types of customers.

“I’m trying to come up with at least one recipe for each so that I can offer something. But I haven’t had any luck yet with finding something that I’m really satisfied with. But I am working on it,” Tauss said.

In addition to the sweets that fill the display case, Cravings Bakery also specializes in custom cakes for any occasion. From birthdays, weddings, anniversaries, “just-because cakes,” Cravings can do just about anything, so long as it’s not a sheet cake. 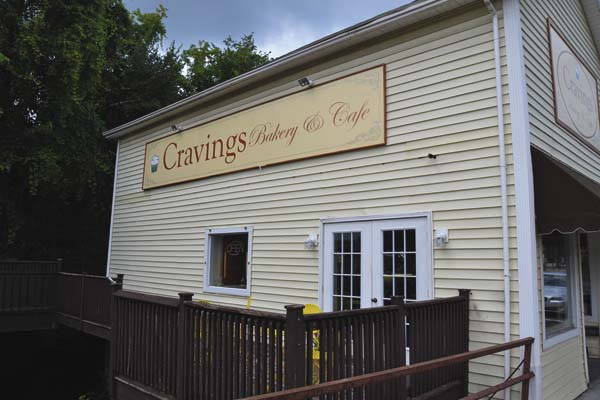 “I don’t do sheet cakes,” Tauss said. “I hate them. I can’t make them look nice. It sounds silly. I can do a 6-tier cake and love it, but I hate sheet cakes so I won’t do them.”

Tauss said her favorite cake that she’s made was a cupcake pull-apart cake in the shape of an alligator.

While Tauss, a Gloversville native, has no formal training when it comes to baking, she said that the knowledge gained from her grandmothers was all the training she needed.

“[My grandmas gave me] the best schooling I could have gotten. Not only the baking part, but everything else that they taught me in my life,” Tauss said. “[They taught me] to be kind and help people when you can because that’s what they were–they were the most selfless people I know. They would help anybody. And that’s the way I like to be. To make other people happy, that’s what I enjoy. That’s what makes me happy.”

Tauss decided to open up the bakery with the encouragement from her fiance. After earning a bachelor’s degree in psychology, Tauss had plans of getting a master’s degree. But when the opportunity arose to fulfill a lifelong dream, Tauss decided it was her chance to make that dream a reality. Now having been open for more than a year, Tauss said that business is going well, and that she is blown away by the support she has received from the community. 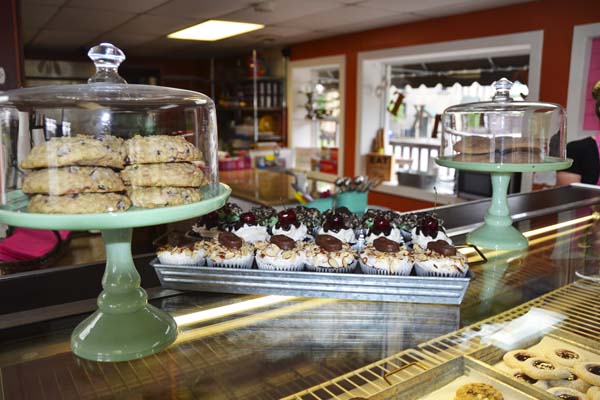 A tray of cupcakes sets between two cookie platters on top of the counter for display at Cravings Bakery on Thursday. (The Leader-Herald/Josh Bovee)

“I can’t get over the response that I’ve gotten from the community and my customers. They are so nice. Everybody comes in here happy and they leave happier, “ Tauss said. “You’re coming to a happy place.”

But even happy places can sometimes be stressful, as Tauss described the stress that can build from putting together a custom cake.

“When people come and tell me what they want for their wedding day, it’s a lot of pressure that people don’t realize,” Tauss said. “There’s a lot more to making cakes than just throwing some frosting on and being done. When you do custom things, it’s a lot of pressure and stress and losing sleep. That is probably the biggest challenge.”

But with a huge support system, including her fiance, mother and father, aunts and uncles, and the ever-present memory of her grandmothers, Tauss is able to work through the stress. But the part that makes all the hard work worth it for Tauss is seeing her customers reactions.

“The response from everybody, I’m blown away by it,” Tauss said. “People tell you the sweetest things that they don’t have to say. That stuff means so much more than you can say. It can’t be described what that means to me. So the people here have really supported and wanted to be a part of all of this. And it’s incredible. It really is.” 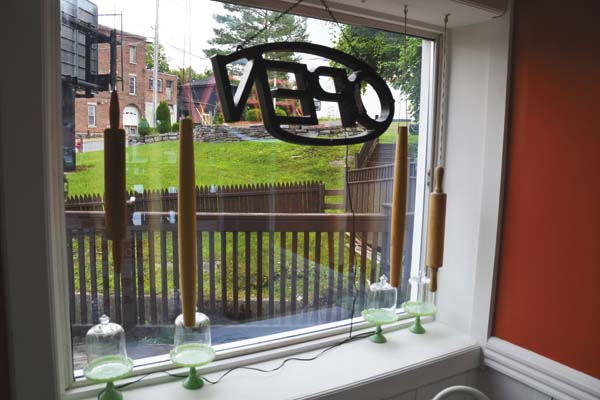 Rolling pins hang inside a window in Cravings Bakery, overlooking the Cayadutta creek. (The Leader-Herald/Josh Bovee) 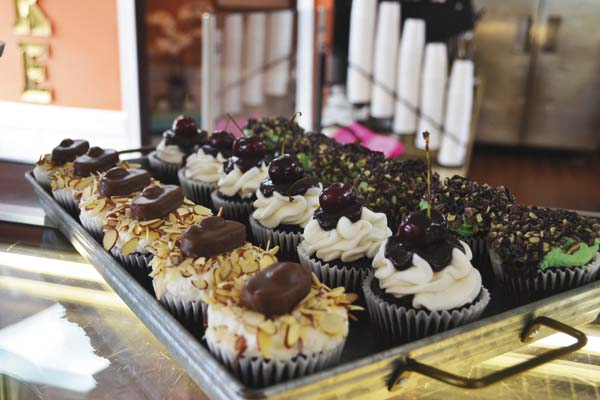 A tray of cupcakes on top of the counter for display at Cravings Bakery on Thursday. (The Leader-Herald/Josh Bovee) 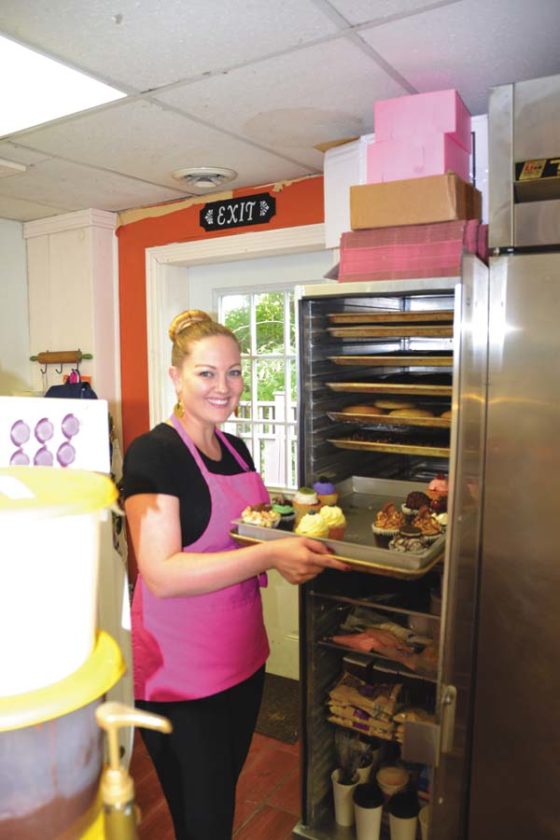 Ashley Tauss holds up a tray of cupcakes inside of her bakery on Thursday. (The Leader-Herald/Josh Bovee)