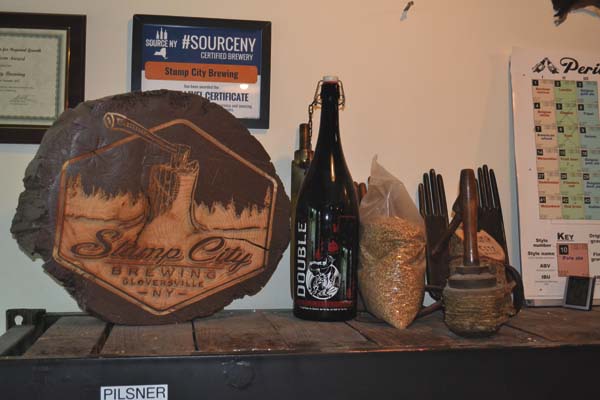 Something’s surely a’brewing in the Glove Cities. It’s stirring things up and causing a considerable amount of excitement all over town. It’s not a storm. It’s beer and hard cider.

Opening within a month of one another, with only a five minute drive between them, Rogers’ Cideryard and Stump City Brewing are both open for business, and apparently they can’t make their potent elixirs fast enough.

“It’s nice having them there. As a crow flies, [Stump City Brewing] is right there, less than a mile away. It’s ironic that a brewery and a cidery opened up in the same town within a month of each other,” said Mitch Rogers, owner and operator of Rogers’ Cideryard.

Rogers, who grew up on and continues to work at Rogers Family Orchard, which is owned by his father, graduated from SUNY Cobelskill in 2014 with a degree in agricultural business management. It didn’t take long for him to blend family history and education into his own business. 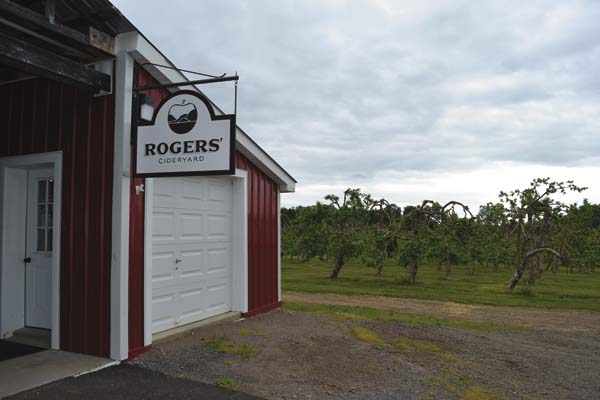 Rogers’ Cideryard opened its doors in February 2017. A cider pub, Rogers’ Cideryard serves local beers and liquors, housemade pub food, much of which is sourced from local farms, and of course a plethora of their own signature hard ciders. From blueberry, ginger, plum, crab-apple, and strawberry-jalapeno, Rogers is always experimenting and serving new flavors. But it is his “traditional” hard cider, on which he stakes his reputation.

“Mostly I like to stick with apples,” said Rogers. “We’re different from a lot of cider operations because, for the most part, we grow and harvest or wild forage all of our own apples. What I tell everybody with my cider is that it’s just apples. I don’t add sugar and usually I don’t add yeast.”

Just down the road from Rogers’ Cideryard, another type of drink is being crafted. Stump City Brewing opened in January 2017 and has been steadly turning out brews to a growing customer base ever since.

“We are four guys who decided we want to make beer, go figure,” said Nick Sherman, a co-owner of the brewery. Stump City is owned and run by Nick and Matt Sherman, their father Jerry Sherman, and Casey Oare, all of whom had been brewing their own beers for years before the brewery was conceived.

Like Rogers’, Stump City Brewing is steeped in local tradition. The brewery takes its name from an old nickname for Gloversville, which harkens back to the hay day of the glove mills and tanneries of the area. 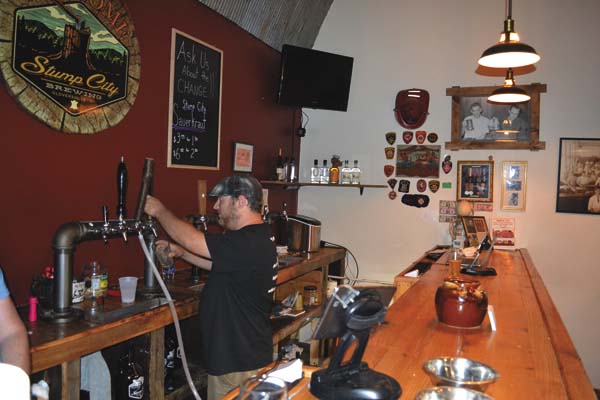 “Gloversville used to be called ‘Stump City’ because they used to cut down all the tamarack, oak, and hemlock trees for the tanning operations, and all of these tree stumps would be left over,” said Matt Sherman.

In sticking with that theme, the Stump City taproom is arrayed with “rustic industrial” decor and local memorabilia. Even their beers pay credence to the area’s industrial past. Stump City offers a ‘Cayadutta’ cream ale, named after the Cayadutta creek that weaves its way through Johnstown and Gloversville. The cream ale is served embellished with a squirt of natural fruit flavoring, available in numerous flavors and colors, in recognition of old stories of the creek running different colors from tanning dyes that were dumped into the water.

Their other regular beers include Stump City Red Ale and Stump City Pale Ale, in addition to a rotating list of specialties.

Outside of tradition, Stump City Brewing is part of a relatively new trend that has hit New York state. Stump City Brewing is a registered farm brewery, a title which stipulates that they must source a percentage of their ingredients from New York state farms. Until the end of 2018, 20 percent of all the ingredients must come from New York State farms. After that, the percentage goes up to 60 percent, and by January 2024, 90 percent of all ingredients must be state based.

“[Stump City] is already running at about 80 percent,” said Matt Sherman.” Which means that the majority of their ingredients are locally sourced, including cascade hops grown from Goderie’s Tree Farm in Johnstown. 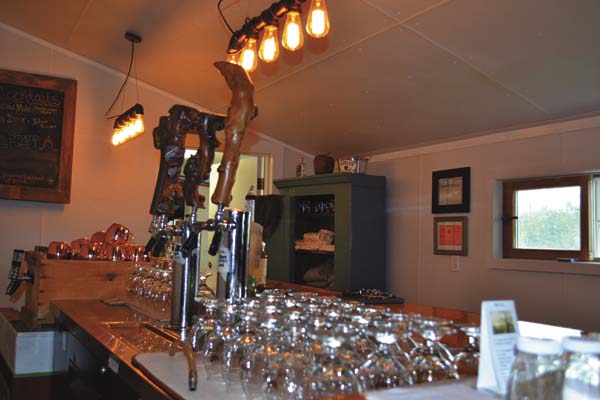 It shouldn’t come as too much of a surprise that these businesses have opened, since small-scale, local breweries and ciderhouses have steadily been popping up all over the country in recent years.

But for all their popularity, the beer and cider market can be somewhat volatile and mercurial. According to both Rogers and the Shermans, the saturation of microbreweries and cideries of late has created a slight downturn in the market for bigger regional microbreweries. In place of those regional breweries and cideries smaller operations such as Rogers’ Cideryard and Stump City Brewing are taking precedence.

“The commercial industry is seeing downward trending sales. I don’t think that the market is in trouble, but local places–more centralized, less wholesale-based places–have seen up turns,” Rogers said. “So a lot of places like mine–places that really focus on their local markets– are doing much better.”

With the idea of “hyperlocality” in mind, both Rogers’ and Stump City are steadily growing in their community. Rogers’ Cideryard is in the process of building an outdoor patio and has plans to expand their taproom area. They serve food including housemade chicken wings, fried cheese curds from Palentine Cheese, and poutine with hand cut fries from locally grown potatoes.

In an effort to keep up with demand, Stump City Brewing is in the process of installing a 20-by-25 foot cooler and switching over from a single barrel brewing system to a five-barrel system, which will increase their yield from 31 gallons of beer [or two kegs] per batch to 155 gallons [or 10 kegs] per batch. They are also set to begin serving smoked foods from an on-site food truck on Fridays and Saturdays.

Both Rogers’ and Stump City are slowly making moves towards selling their products wholesale. Rogers’ ciders can be found in several local restaurants including the Cock’n Bull Restaurant in Galway and The Red Shed Brewery in Cooperstown.

According to Stump City’s owners, the installation of the larger brewing system will help get their beers out into the town. They are also considering the possibility of opening a satellite taproom.

But it will be a while before we see either Rogers’ ciders or Stump City’s beers in bottles and cans, as both are committed to taking things slowly and focusing on the local market.

“As far as packaging goes,” said Nick Sherman, “we’re still a solid year-and-a-half to two years away, because we are taking baby steps. We’re not doing what a lot of these breweries are doing which is taking giant leaps. I want to have fun. I don’t want to be sitting here stressing out about half-million dollar loans.”

In a similar remark, Mitch Rogers said, “I’m not going to get into bottling or canning in the foreseeable future. If I do, it won’t be for a long way down the road. Especially because I see the down turn in that type of business. I really want to focus on this place and the local economy and the local restaurants.”

“It’s not a competition at all,” said Nick Sherman.

“We have a really good relationship with Roger’s Cideryard,” Matt Sherman added. “I call it cooperative competition. You’re not really competing against each other. You’re working together so that you all are better. We did a collaboration with them. We did a snow shoe over to Roger’s over the winter. We walked through the woods all the way over to Roger’s. We plan on doing events like that again.”

The main focus of these two taprooms is to serve high quality beer and hard cider to the local communities, as they are both committed to making the region a better place.

“A lot of times, when I walk into other bars, no one looks at you, no one talks to you,”said Rogers. “Everyone is on their phone or watching the TV. When people come in here, everyone’s friends, everyone talks. It’s the same at Stump City. Everyone’s always happy. It’s new, so it brings a new idea into town. It brings an excitement. It gives another reason for people to want to stay.”

Nick Sherman agreed, saying, “I don’t think we’re looking to say that we saved the city. We’re looking to be that little spark that starts things rolling just a little bit faster.”

“You can either make a place stay the same or you can try to make it better. It’s your choice,” said Matt Sherman. “We want to make it better. At the end of the day, this is not for us, it’s for the community. I want people to say, ‘You have to go there and try the cream ale.’ Or ‘you’ve got to try to the red.’ I want people to take ownership of Stump City. This is your beer.”