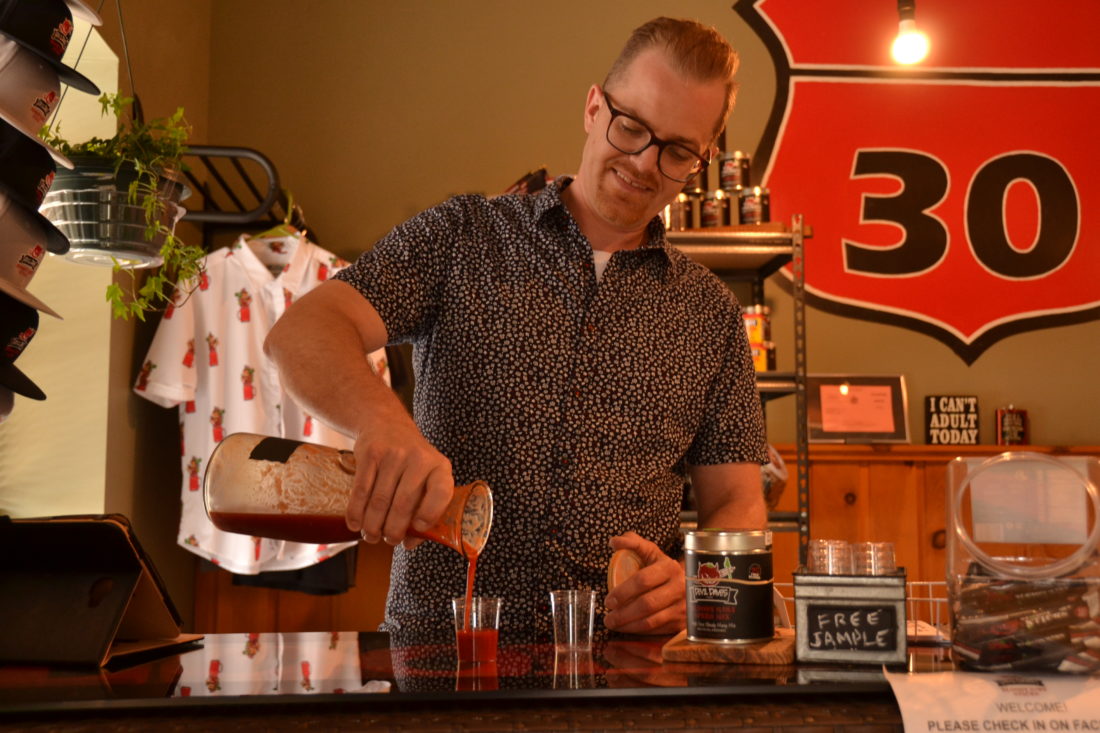 Ryan Pakenas, founder of Devil Dave’s, pours Bloody Mary samples from a carafe at his store in Mayfield. (The Leader-Herald/Josh Bovee)

The Storefront of Devil Dave’s, located at 2469 route 30 in Mayfield. (The Leader-Herald/Josh Bovee)

Ryan Pakenas, founder of Devil Dave’s, pours Bloody Mary samples from a carafe at his store in Mayfield. (The Leader-Herald/Josh Bovee)

From down on his luck to innovator in a budding industry, Ryan Pakenas, the man behind Devil Dave’s Bloody Mary Sticks, is curing hangovers and bringing cool and hip to Mayfield and Fulton County. And he has no plans of stopping there.

Devil Dave’s Bloody Mary Sticks are the world’s first instant, dry mix, single-serving Bloody Mary stick packs on the market. Made from Pakenas’s very own blend of spices, including real freeze-dried horseradish that “blooms up in the glass” upon mixing, Pakenas said these unique packets of spice are taking the market by storm.

“No other company has it. Nobody’s doing what I do. This is a winner,” said Pakenas.

A former chef, bartender and e-commerce entrepreneur, Pakenas used his culinary and marketing experience to develop the company, which is named after his Uncle Dave, “the champion Bloody Mary maker of the family.” 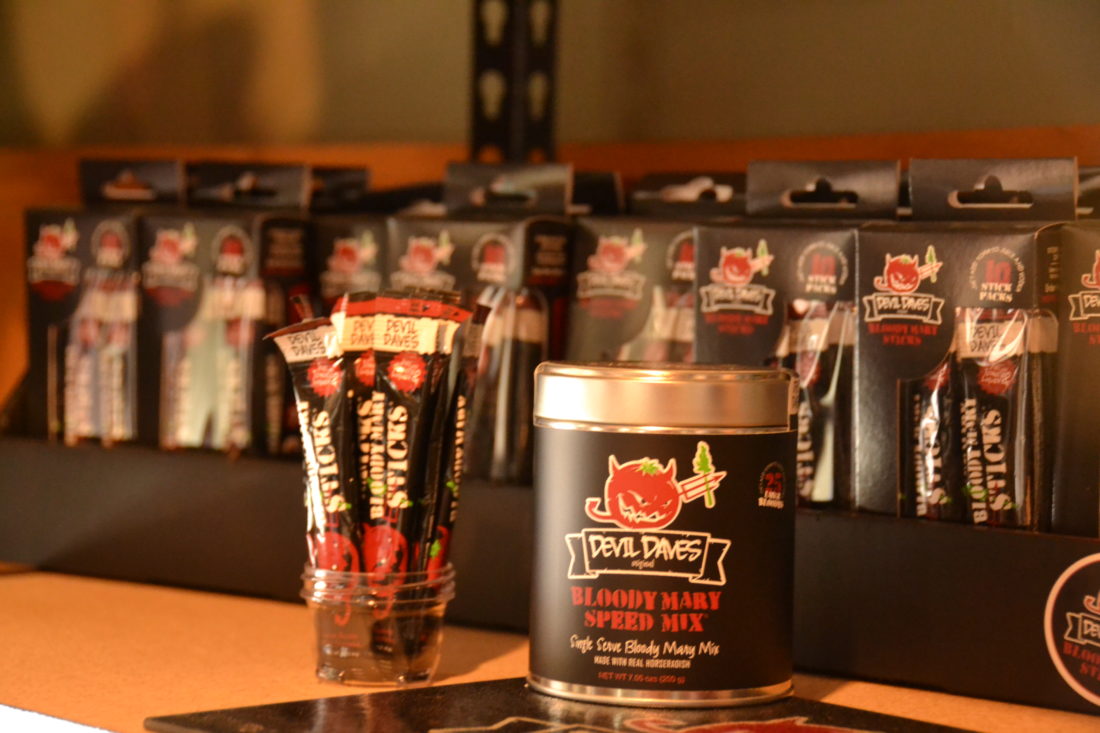 “My aunt’s not really happy with [the name] because I don’t think she agrees her husband is actually very devilish. They’re very nice people. But I don’t think my Uncle Dave minds it. It’s definitely a tribute to him,” said Pakenas.

The concept came to Pakenas at a time when he was bartending in Ocean City, Maryland.

“Bloody Mary’s are king down there,” said Pakenas. “They put crab and lobster and cheeseburgers in their Bloody Marys and rim the glasses with Old Bay. But they are the hardest thing to make because they’re so time consuming.”

Assuming there must be an easier way to make the tomato-concoction, Pakenas began mulling over ideas. But it wasn’t until he moved back to this region that the idea really started to blossom.

Pakenas started Devil Dave’s after going through a bit of a rough patch. Pakenas had recently gone through a breakup, a move home from Maryland, and he was having trouble finding a place to live. After finally securing living arrangements, Pakenas began working as a sous chef for an ill-fated restaurant in Troy, a position from which he was fired after only a brief time. At wit’s end, Pakenas decided he’d had enough of working for other businesses. 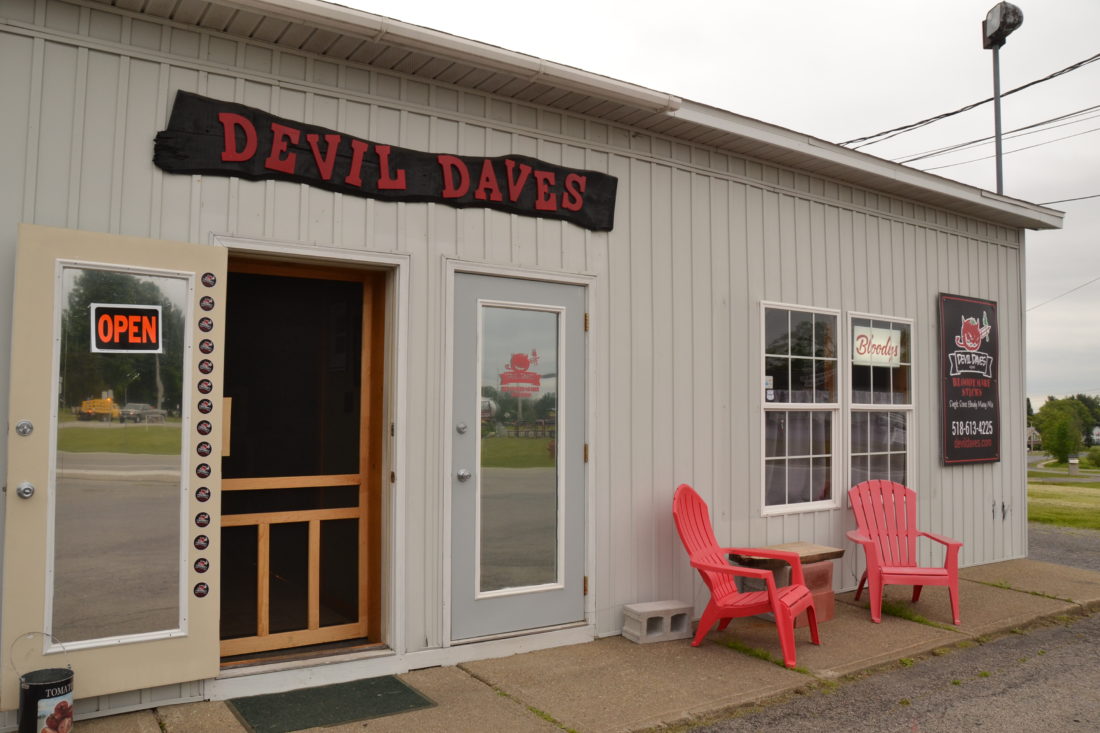 The Storefront of Devil Dave’s, located at 2469 route 30 in Mayfield. (The Leader-Herald/Josh Bovee)

“I said, ‘that’s it. I’m never going to work for anybody ever again.'”

Pakenas, had recently become sober and had managed to save up $15,000 from his time as a bartender in Maryland and through an e-commerce website he had started.

“I’d just saved a bunch of money. What can I do with the Bloody Mary industry?” said Pakenas. “I looked online and noticed there is no single serve stick packs out there to make a Bloody Mary. Stick pack drink mixes are kind of new to the industry. A light bulb went off in my head. That was my Eureka moment. I’m going to continue to be sober but I’m going to start a Bloody Mary business.”

With the Devil Dave’s logo complete, Pakenas then began developing a recipe, allowing his culinary background to shine.

“I’m a former chef so I know spices. I’m a bartender too so I know drinks. I’ve got really core values in the culinary industry. So I came up with a recipe in my head. It’s got to have garlic. It’s got to have onion. It’s got to have Worcestershire, celery salt, and it’s got to have horseradish to give it some heat. So I started looking for how to source ingredients and I found a company. The very first company I found is the one I still use today.”

But even with a recipe and a logo fully developed, the hard parts of developing his idea were just beginning. The next step for Pakenas was securing a means of packaging and production, a phase which turned out to be much more trying than he had ever imagined.

“That was the real eye-opener. That was when I almost shut it down,” Pakenas said.

With the little money he had remaining after logo and recipe development, Pakenas’s next step plan was to produce 5,000 individual stick packs.

After being laughed off and turned down by a number of packaging sources which produced on a much larger scale, Pakenas was on the verge of giving up on his idea. But it was the spices themselves– already purchased and sitting around inside of Pakenas’s home–that inspired Pakenas to move forward with his dream.

“I sat for about a week. I sat with these spices. And I could keep smelling them because they’re in my room. I dreamt about it and dreamt about it, and I woke up in the morning and I had this idea. Kickstarter. Kickstarter is how I’m going to fund the rest of this,” he said.

With a great deal of hard marketing leading up to the Kickstarter campaign, Pakenas was able to develop a large amount of buzz surrounding the product.

Pakenas launched a Kickstarter campaign on Jan. 1 and managed to raise more than $15,000 in four days. That money gave Pakenas enough funding to produce 50,000 stick packs.

Devil Dave’s officially launched in February of 2018 and already Pakenas has preparing for a second run of his famous Bloody Mary sticks.