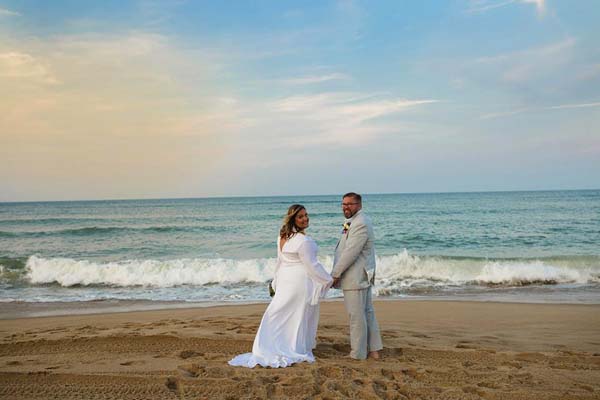 Melissa Melucci, the daughter of Jeffrey and Mary Melucci of Perth and the granddaughter of Edward and Anne Lomanto of Gloversville, was united in marriage to Joshua Pickard, the son of Kathy Burch of Flushing Mich., and James Pickard of Alger, Mich.

The ceremony took place June 8, on the beaches of Kill Devil Hills, N.C. Outer Banks. The guests attended from all over the country including New York, Michigan, California, Washington, Montana and Georgia.

Terry Pickard, Tracy Bailey and Lucas Melucci, siblings of the bride and bridegroom were included in the ceremony.

Melucci, a 2001 graduate of Gloversville High School, received a bachelor’s degree in child and family studies from Oneonta State University in Oneonta, Otsego County, and a master’s degree in higher education and leadership from the College of St. Rose, Albany. She is a counselor at Hudson Valley Community College, Troy, Rensselaer County.

Pickard, received a bachelor’s degree in international relations from James Madison College at Michigan State University. He is the associate head women’s volleyball coach at the University at Albany.

A wedding trip to Italy and Greece is planned for spring 2019. The couples resides in Troy with their dog, Luccianno Pickard.