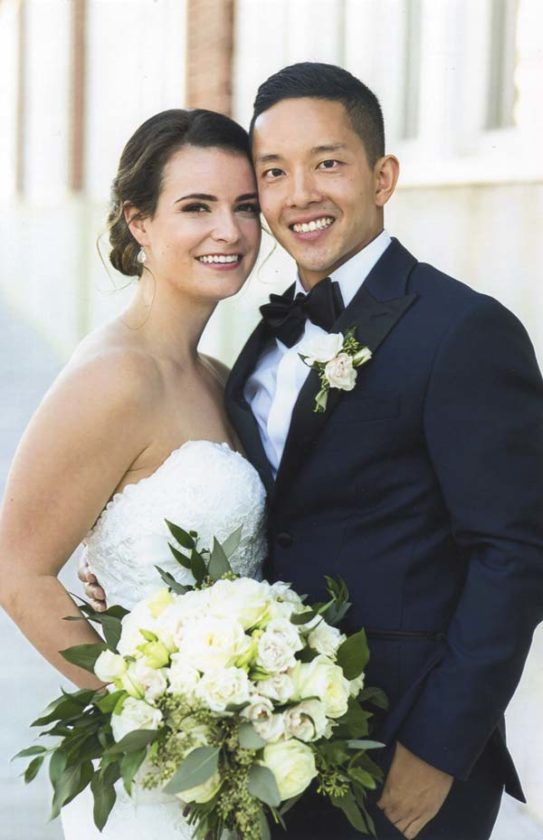 Dr. Megan Pollak, the daughter of the Theodore Pollak and late Lisa Pollak of Johnstown, was united in marriage to Dr. Andrew DeLeon, the son of Lolita Maniquiz of Chicago, Ill., at 4 p.m. Oct. 20, 2017.

The ceremony took place at The Bond, York, Pa.

The bride was given in marriage by her father.

The matron of honor was Kayla VanHooker of Johnstown, sister of the bride. The bridesmaids were Leia Bignom, Haley Jaeger and Amanda Jurewicz, all of Chicago, Allison Kollar of Johnstown, Amanda Baker of Fonda, Kate Purcell of Buffalo, Erie County, Molly Gordon of Roland, Okla. The flower girl was Evelly Van Hooker, niece of the bride.

The best man was Steven DeLeon of Chicago, brother of the bridegroom. The groomsmen were Thibault Bignom of Brooklyn; Christopher and Alexander DeLeon, Paul Nakanishi and Anthony Bryant, all of Chicago; Gary Van Hooker and Kyle Pollak, both of Johnstown. The ringbearer was Noah Bignom, nephew of the bridegroom

The couple resides in Baltimore, Md.

The bride is a 2010 graduate of Johnstown High School, a 2013 undergraduate in biology at Hartwick College in Oneonta, Otsego County, and a 2016 graduate with a doctorate degree in physical therapy from Clarkson University, Potsdam, St. Lawrence County. She is a physical therapist.

The bridegroom is a 2006 graduate of Carmel Catholic High School, Mundelein, Ill., a 2010 undergraduate in psychology from Loyola University, Chicago, and a 2014 graduate with a doctorate of physical therapy degree from Clarkson University. He is a physical therapist.