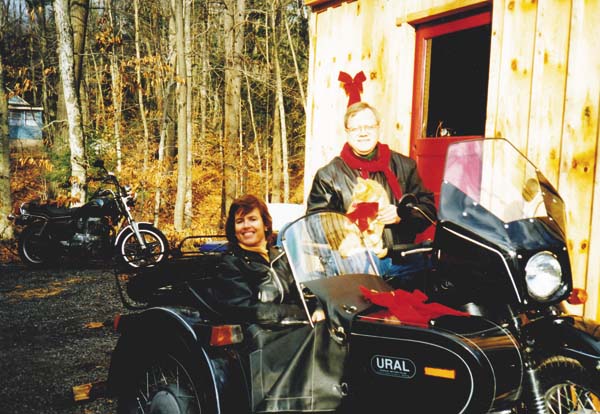 Kathryn Spira, Richard Nilsen and their cat Sam are shown in this holiday snapshot with their Ural motorcycle. (Photo courtesy of Richard Nilsen)

CAROGA –Kathryn Spira was happiest when sitting in the sunshine.

Set up beachside on her property in Caroga Lake, she could enjoy the fresh air offered by the Adirondacks, and if the water temperature cooperated, head out into the waters.

At night, she could look out the windows of the home that she built with her life partner, Richard Nilsen, and watch the sunset and view both the mountains and the waters.

Spira, a long-time Leader-Herald columnist, died on Oct. 17 at Nathan Littauer Hospital, succumbing to complications from multiple sclerosis with Nilsen by her side. 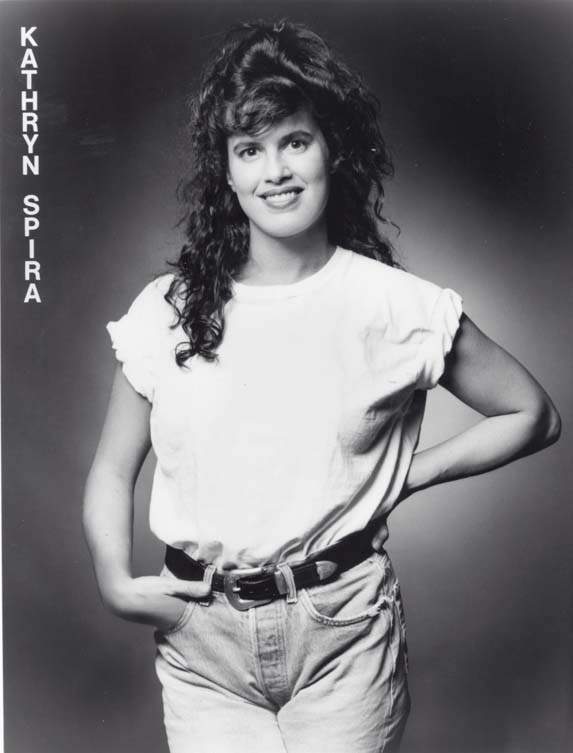 Kathryn Spira in a picture from her acting portfolio. (Photo courtesy of Richard Nilsen)

She was born April 12, 1960 in Cleveland, Ohio to Margaret Leowenthal Phillips (Spira) and Arnie Phillips and was the beloved, adopted daughter of Joseph Spira. She has two sisters, Debbie Phillips and Linda Bliss, who predeceased her eight years ago to the day.

“If you met Kathryn, in five minutes you knew who she was. And five years later, you didn’t have to make any alterations, because there are no layers to peel back. She would be in your face,” Nilsen said. “I found that very refreshing

She attended college at Indiana University, leaving to pursue acting after being recruited by the American Repertoire Theater Company her junior year at the school.

She toured with the troupe for about two years before moving to New York City, where she starred in off-Broadway plays, had bit parts in television soap operas and worked as an extra on the film “Ghostbusters.”

“When she moved to New York City, she didn’t know a soul there. She had no job and no place to stay. The first day she got there, she met a stranger and got a place to stay and got a job,” Nilsen said. “She was just that kind of person. She had an almost explosive social personality.” 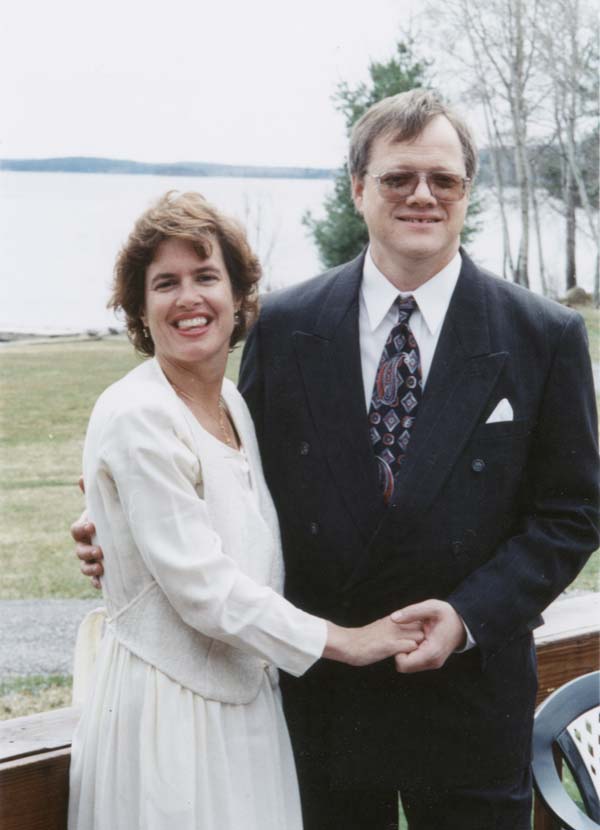 While in New York City, she worked alongside names like Eddie Falco and Anthony Bourdain in restaurants.

A decision to move to Hollywood was next, where she landed various bit parts in movies such as Oliver Stone’s “The Doors.”

Nilsen said at that time she use to double date with Julia Roberts and would chat with Dennis Hooper about the Venice Beach neighborhood at her job at the West Beach Cafe.

But, she was never the type of person to put the famous on a pedestal.

“Nobody had any particular priority for her. She didn’t look up or down on anybody. Everybody was on the level,” Nilsen said. “The way she got along with kids, it was never on a parental level. It was always on an equal level. She would get down on their level.” 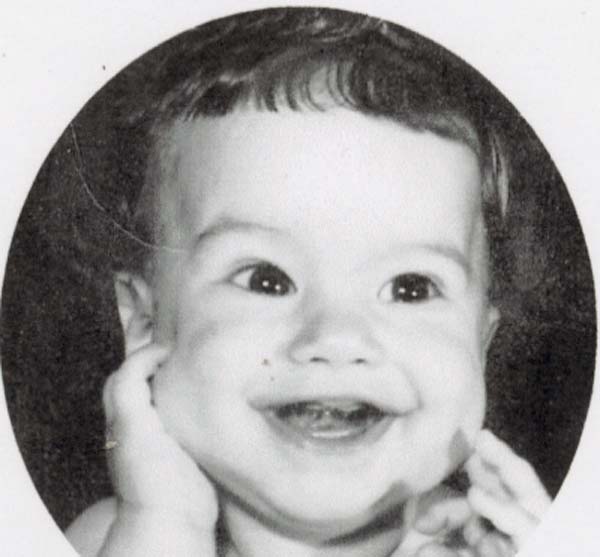 Nilsen said that her personality was one that saw people follow her. He said the Sheen family, including actor Martin Sheen, use to come and see her at a New York City restaurant. When she relocated to Los Angeles, the Sheens sought her out at her new restaurant job and would ask for her.

Nilsen said she moved to the Adirondacks after she met a man at her mother’s condo in Florida. She decided to follow him and stayed in Fulton County ever since.

After her move to the Adirondack Park, she began writing her arts and entertainment column for The Leader-Herald in early 1995.

Nilsen said she contacted the then editor about doing a column. When the editor asked to see her writing samples, Spira stated she lost them in the move.

So, the editor asked her to write something to test her out, and her piece appeared in the paper the next week.

She continued to write “Kathryn’s Korner” for the next 23 and a half years.

“She would talk her way into anything she couldn’t necessarily do,” Nilsen said. “I thought it was a pretty unique way to get published.”

Nilsen said Spira loved being able to have the voice that writing gave her. 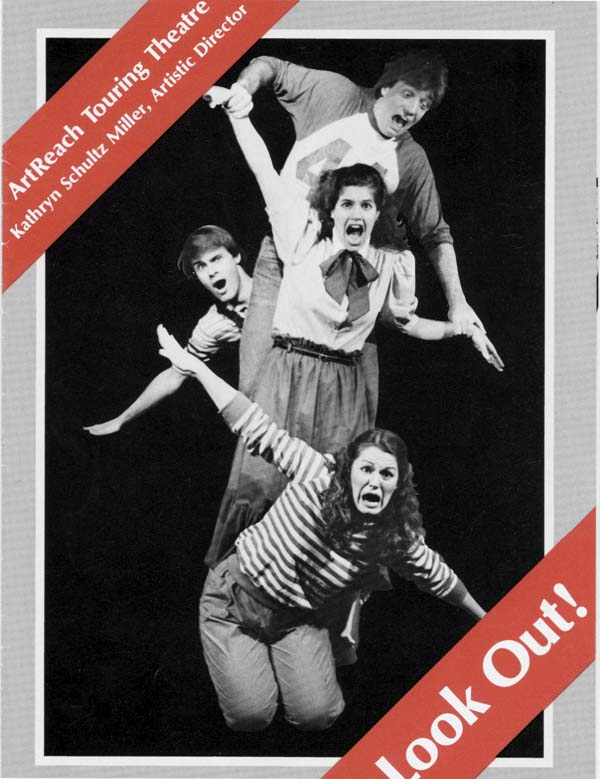 Kathryn Spira, shown in the middle, is shown in this advertisement for the ArtReach Touring Theatre. (Photo courtesy of Richard Nilsen)

Spira and Nilsen met in 1995, when he invited her to a writers’ workshop he was holding. He said Spira initially turned down coming to the group, but eventually changed her mind and ended up traveling with him to another workshop in Saratoga Springs.

They held a union service on April 21, 1996 at Lanzi’s on the Lake, attended by many of her friends from both childhood and her acting days.

Nilsen said Spira was fearless and had an absolute sense of adventure.

The couple adapted his sailboat with an altered seat to allow her to sail with him. She would often ride in the sidecar of his motorcycle, sometimes drifting off to sleep.

“Nothing ever held her back,” Nilsen said. “She did things that you wouldn’t think somebody in her condition would do, she was out there doing it.”

He spoke of a time when he and Kathryn went to a talk with Gloversville-born author Richard Russo.

During a question and answer session, someone in the audience asked Russo why so many of his books included scenes in diners and restaurant. Russo answered that was because those were the jobs he worked while on his way to becoming a published author.

“Right away, Kathryn’s put her hand up and she was called on. Her question was ‘Didn’t that suck?'” Nilsen said with a laugh. “Everybody burst out laughing. She loved to do that kind of thing. She didn’t care what anybody though. She was fearless, positive and always looked for an adventure.”

Nilsen said Spira loved seeing her name in lights, something that didn’t occur much until she moved to Fulton County.

“That’s where she was more published and read, and more known than she ever was in Hollywood or Broadway,” he said.

She authored two memoirs: “In Kathryn’s Korner” and “Training Wheels” as well as the combined volume, “From Hollyweird to the Back Woods.”

Nilsen said they once learned during a system glitch that she was getting somewhere between 1,500 and 3,000 hits per column.

“There were quite a few folks looking her up,” he said.

He said she loved getting responses from readers.

Nilsen said she was never afraid to ask for what she needed, often talking with area businesses about issues with access and use of their building, such as steps, that she couldn’t navigate with her wheelchair. Nilsen said most business and organizations made alterations, or found solutions for her.

“She always spoke her mind, and she often got what she wanted because she spoke up,” he said.

The couple resided in Caroga Lake for much of their union, first in the Nilsen family summer camp that was renovated to make it year-round. They then later lived in a home they built themselves near Shermans with easier access to the beach for Kathryn and accommodations for her wheelchair.

Nilsen said Spira was the type to always talk positively about Caroga.

“She was always a good [public relations] person for wherever she was. She would only talk about the good things, the Caroga Music Festival, the weather up there, the beauty of the Adirondacks. She was never a downer,” Nilsen said.

He said she loved how peaceful the area was.

“She really loved it here. She was someone who could appreciate what she had and not think about what she didn’t have,” he said. “She loved where she was, and she made the most of it.”

She was active in the local community as well, becoming a member of a number of boards, including Big Brothers. Big Sisters, for more than a decade.

“She plugged in when she was still able to get around easier,” Nilsen said. “I think she is a great loss to a lot of people because of her involvement in the community. I think, especially today, people are tired of the negative political climate, and they’re happy to see some upbeat positivity.”

Leader-Herald managing editor, Patricia Older, said when she was editing Kathryn’s columns for the Sunday paper, she always felt inspired by her optimism.

“No matter what Kathryn was facing, including not being able to use her body, walk, or even dress herself, she was always so upbeat and full of sunshine,” said Older. “After reading her columns, I examined the way I looked at life and told myself, ‘Don’t sweat the small stuff,’ because that was Kathryn — she could have sweated the small stuff, but she didn’t even let the bad stuff get her down. She was the sun to her fans and her columns will be greatly missed. “

Kathryn Spira in a picture from her acting portfolio. (Photo courtesy of Richard Nilsen)

Kathryn Spira, Richard Nilsen and their cat Sam are shown in this holiday snapshot with their Ural motorcycle. (Photo courtesy of Richard Nilsen)

Kathryn Spira, shown in the middle, is shown in this advertisement for the ArtReach Touring Theatre. (Photo courtesy of Richard Nilsen)