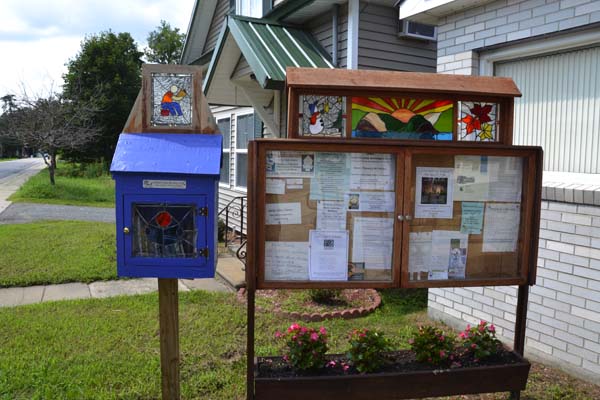 The first of the Virginia Hosley Free Library’s Little Free Library in the town of Wells is shown outside of the Wells Post Office on Wednesday. The library has installed three of the boxes around the town. Rocky Milano created the stained glass work for both the box and the community bulletin board. (The Leader-Herald/Kerry Minor)

The first of the Virginia Hosley Free Library’s Little Free Library in the town of Wells is shown outside of the Wells Post Office on Wednesday. The library has installed three of the boxes around the town. Rocky Milano created the stained glass work for both the box and the community bulletin board. (The Leader-Herald/Kerry Minor)

Some of Rocky Milano’s stained glasswork is shown on the Little Free Library by the Wells’ fishing pier. (The Leader-Herald/Kerry Minor)

Members of the Virginia Hosely Free Library Brian Griffin, left, Alice Megargle, center, and John Menke stand in front of one of the Little Free Libraries in the town of Wells on Wednesday. (The Leader-Herald/Kerry Minor)

WELLS — Set up around the town, a series of little boxes with intricate stained glass inserts are eye catching.

Sitting in places where both locals and visitors stop by, they contain a wealth of literature inside for both young and old.

Since early last year, the Virginia Hosely Free Library has been operating three Little Free Libraries around the town.

The idea behind the library came from a successful little box in another state.

Library Board of Trustee member John Menke’s son, Benjamin, had put one up in his Massachusetts town. Menke said the venture was a successful one, with that box constantly having books go out. 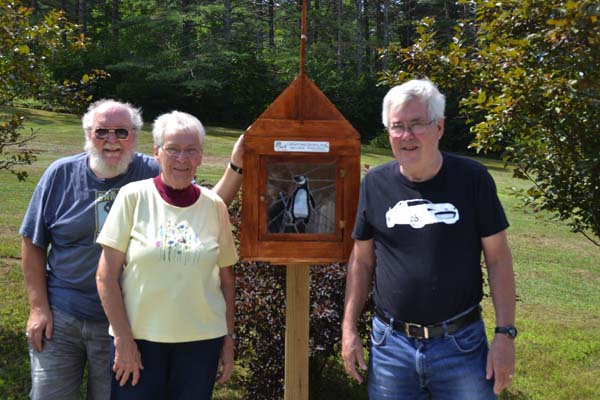 Members of the Virginia Hosely Free Library Brian Griffin, left, Alice Megargle, center, and John Menke stand in front of one of the Little Free Libraries in the town of Wells on Wednesday. (The Leader-Herald/Kerry Minor)

This gave him an idea.

The Virginia Hosely Free Library is an entirely volunteer organization that is able to open the main library for a couple of hours each week.

Menke said the board wanted to do something that would allow them to serve the community more often. He said when he heard about the success of the Little Free Library his son installed, he decided to bring the idea to the board.

The idea was a welcome one, with the board agreeing to pay the $35 fee to the Little Free Library national organization to get put on their map and have a plaque for the box.

Even though the national organization sells its own construction kits or ready made boxes, Menke said the library decided to go in a different direction. 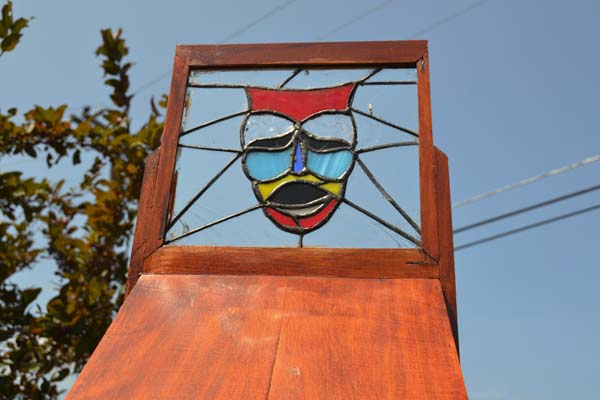 Some of Rocky Milano’s stained glasswork is shown on the Little Free Library by the Wells’ fishing pier. (The Leader-Herald/Kerry Minor)

They contacted local artist Rocky Milano, who was onboard about creating a box.

Trustee Brian Griffin said the stained glass was a bit of a surprise for the library board when they were shown the work.

Milano said when he was told about the idea, he was excited.

“I thought it was a good idea. It was tremendous, and I was glad to participate,” Milano said. “Some of the boxes I tried to make indicative of libraries or people reading. I tried to design the glass so it would be more appropriate for a book depository.” 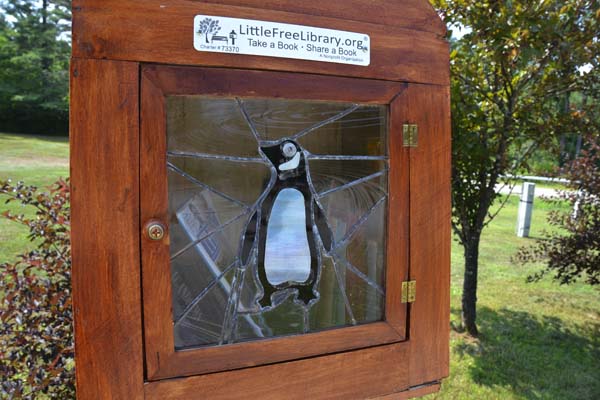 Once Milano was finished, the box was installed in the winter of 2017.

The first box was placed outside of the Wells Post Office since it is a meeting spot for the town. Menke said that since Wells doesn’t have mail delivery and people have to go to the office to pick up their mail, it made sense to place it there.

“This is our way of giving back to the community that really wouldn’t have that advantage otherwise,” he said. “It really is such a unique concept, and such a simple concept. I don’t know why it hasn’t been tried in the past because it is relatively new and it is catching on across the country.”

Library Chairman Alice Megargle said the boxes were an immediate hit, with residents taking and sharing books via the box.

The project was so successful, that they decided to add two more.

The second was installed in the parking lot across from the fishing pier and the third at the Wells Edge Country Store.

Megargle said she was told by one woman that after reading a book from one of the boxes, the reader became so interested that she worked her way through the author’s entire collection that was available at the library.

“We got her reading this series because of the book she took out of the box,” Megargle.

Menke said that once people discovered the boxes, word spread and the books began making their way around town.

Megargle said the box across from the pier includes a number of children’s books.

Menke said that they noticed that when children accompany their parents or grandparents on a fishing trip, they often got impatient waiting for a catch. So the library box allows them to go grab a book and keep occupied as they await a fish.

Griffin said the library had to work with the town to get this particular box installed. He said however, that they were very keen on the idea.

“The town has been very supportive,” he said.

The group is still looking into if they will leave the pier box up in the winter for visiting snowmobilers or if it will be a seasonal location.

Menke said boxes at the Wells Edge include weekly magazines such as “Time” and “The Week” that people often flip through as they sit at the tables and chairs at the store.

Megargle and Menke said the boxes are checked weekly to see if they need to be filled or if there is anything in there that may not be appropriate for children. Library members also clear out any books that haven’t moved in several weeks to make way for new ones.

“If we put the new ones in here, they’re gone,” Menke said.

Megargle said the library tries to keep the boxes filled with a variety of both literary styles and authors.

The library fills the boxes with books that are not part of the official collection and area residents often leave books for others to read.

“The idea is to read and to share,” she said.

Megargle said the library gets a great deal of donations. While many go into the collection, some, such as duplicate books, go into book sales or the boxes.

“If gives us a good supply of materials to use in our boxes,” she said.

Griffin said the boxes keep things in the town that are new and fun.

“It is just helping to make it a pleasant place to be,” he said.

Megargle and Menke said their favorite part of the project was getting books into people’s hands to promote literacy.

“That’s what the library is all about,” Menke said.

Megargle said that the library has fielded requests from other locations around the town that would be interested in having additional boxes added to their locations. Menke said the board is considering the requests.

Menke said the issue with creating more is that they need to be maintained.

Menke said the Wells boxes may be some of the only Little Free Library’s in the Adirondacks.

Griffin said it is easy for a community to start one of the boxes. He said they can be created using things such as recycled lumber.

“We hope that by our example and the visibility — because they are quiet visible on Route 30 and [the pier] — that other organizations and other libraries pick up on the idea. Because it is such a simple idea and so easy and so reasonably priced,” Menke said. “All libraries have multiple copies of books that they can always put in.”