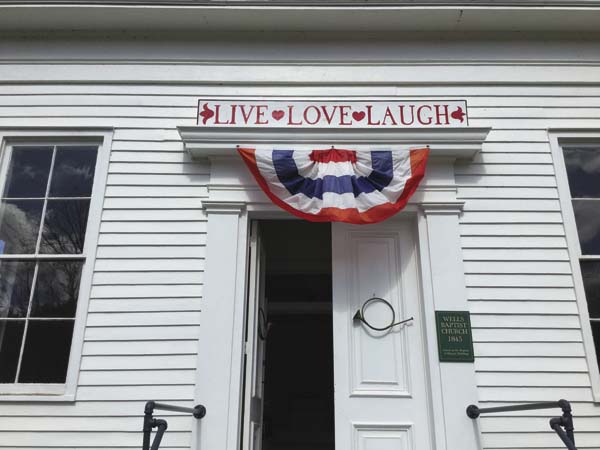 The Revival in Wells, above, used to be the Wells Baptist Church. Now it’s a musical and cultural center. (Photo submitted)

WELLS — In this hamlet, “revival” has a double meaning.

When Pam and Len Broiles bought the dilapidated former Wells Baptist Church, they aimed to restore a historic building and also put new life into it.

The 1845 church had its share of old-time revival meetings. It saw its last worship service in 1949. Under the Broileses, it has become not only a showcase of times past, but a place bursting with energy as the site of The Revival musical and cultural center.

The Hamilton County Historical Society owned the building, and its late president, Ermina Pincombe, wanted to sell it to people who “liked to preserve history and do cultural events,” said Pam Broiles.

The Wells residents bought the building about five years ago after going through two years of legalities required for a private organization to buy it from a nonprofit, she said. 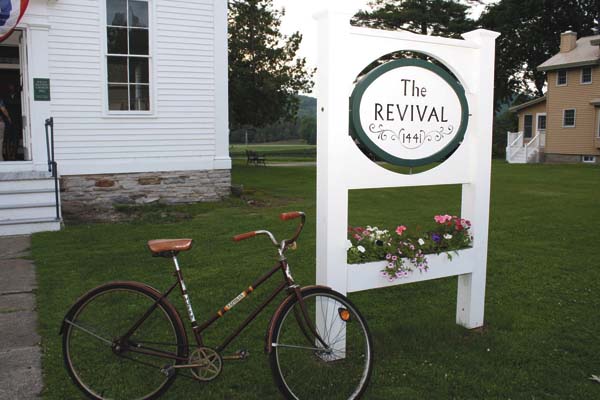 The Revival is the “creative playhouse” of Pam and Len Broiles. (Photo submitted)

Broiles said they wanted the building to be more than a rehabilitated old structure for people just to stare at. “I like to offer music you don’t always hear all the time,” music from the 1920s to the 1970s, she said.

“It’s my creative playhouse,” said Broiles, a vocalist and musician who coordinates the music at St. Ann’s Catholic Church.

The Revival filled the 30-by-40-foot church when it brought in the doo-wap group, Flipsydez, and Annie and the Heathenists with its vintage jazz, blues and roots Americana music.

In the first year of the three-year-old Revival, it held a Cole Porter night. “People like that old stuff,” Broiles said.

The Revival does creative Halloween programs that are fun for kids without scaring them, she said. One year her husband was dressed as a gorilla playing a Wurlizer organ. Another year, it was a Peter Pan program during which youngsters could pull candy from the mouth of a crocodile.

The church hosts not only concerts but open mics, weddings, parties, movies, and paint n’ sips–an event where an artist guides participants in painting a scene. As the word of The Revival spreads, musicians are calling the Broileses to perform there.

The Broileses try to walk the line between preserving the past and making the church comfortable in the present. They added a small bathroom in the anteroom since the original church probably had only an outhouse. They resisted air conditioning but provide hand-held fans churchgoers most likely used to stay cool.

They tore out an altar railing and porch that weren’t original to the church and didn’t fit its Greek Revival architecture. Then they added a new porch, repaired the leaking ceiling, and divided the pews to make a center aisle.

“I just couldn’t take the pews out and unchurch it,” Broiles said. Pew cushions were donated to them.

The windows are the old handmade clear glass with ripples and bubbles and “the floors were all hand-planed with very wide planks and rectangular-cut nails,” she said.

Her husband plans to rehab the belfry that has a rope-pulled bell and funeral dong.

The couple added a low-powered sound system because the church itself is “acoustically gorgeous,” she said.

“The church is a kind of a landmark,” Broiles said. “The idea of having it fall apart was sad.”

In its new role as a cultural center, “the church seemed to come alive — the energy seemed to wake it up,” she said.