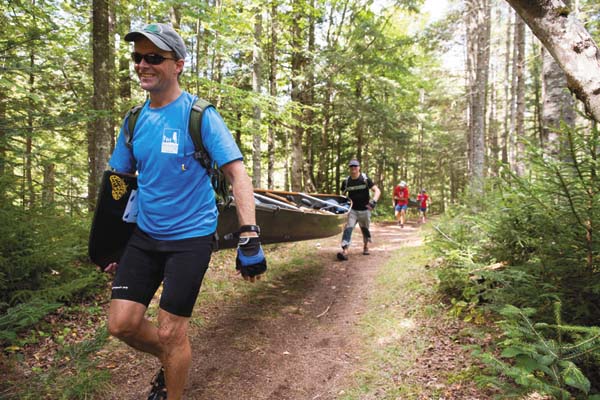 This map shows land parcels in red that were contested for more than a century between private holders and the state of New York. Now the owners of these 216 parcels have clear titles thanks to a deal by which the state used money from these owners to buy the Marion River Carry land, just off this map to the right. (Photo submitted)

Saturday was the 125th anniversary of when Gov. Roswell Flower signed an act establishing the Adirondack Park’s original Blue Line boundary — now much expanded. On Monday, the state celebrated that by announcing it has bought the 296-acre Marion River Carry property, between the communities of Blue Mountain Lake and Raquette Lake, from the Open Space Institute. As part of the same announcement, the state officially put to rest a knotty land dispute that persisted for more than 130 years in what was called Township 40 in Raquette Lake, involving 216 land parcels totaling more than 1,000 acres.

The Marion River Carry has historical as well as recreational value. It’s a popular carry for paddlers on the upper reaches of the Raquette River, and for more than 100 years it was one of the passages by which tourists came to the heart of the Adirondacks.

At one point the carry had its own short railroad. The train is preserved today at the Adirondack Experience (formerly Adirondack Museum) in the hamlet of Blue Mountain Lake. 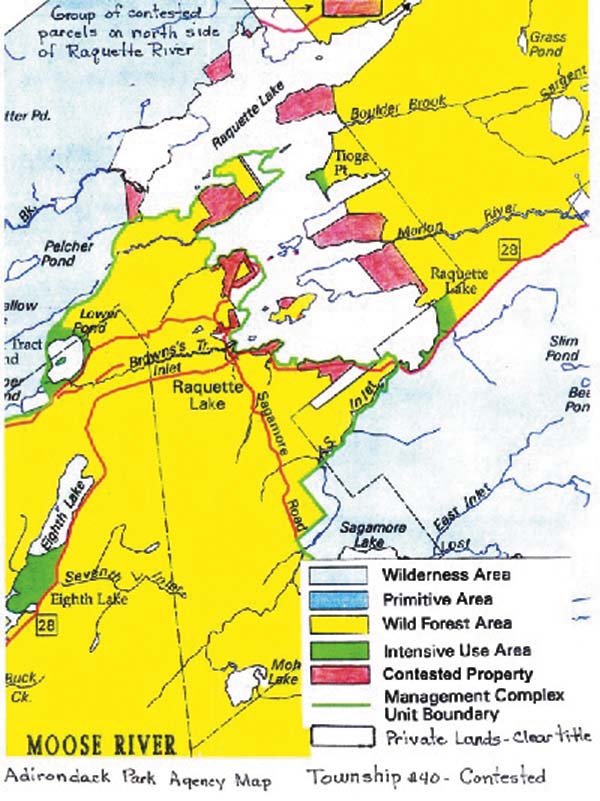 This map shows land parcels in red that were contested for more than a century between private holders and the state of New York. Now the owners of these 216 parcels have clear titles thanks to a deal by which the state used money from these owners to buy the Marion River Carry land, just off this map to the right. (Photo submitted)

The Township 40 quagmire originated in the 1870s and 1880s with possibly illegal tax sales that resulted in unclear titles. The parcels were doubly claimed by the state as well as by private entities that include homeowners, a fire department, a school district and a utility company.

Finally, the DEC and landowners came to an agreement: The state would give up its claims and leave the private owners with clear titles if those people paid money the state could use to buy land elsewhere.

OSI had that in mind when it bought the Marion River Carry in 2012 to protect it from potential development. Earlier this year, OSI transferred the property to the state Department of Environmental Conservation, donating most of its value — $1.3 million. The state also used about $750,000 from the Township 40 landowners for the purchase.

The deal required an amendment to the state constitution, which meant it had to be passed by two successive state legislatures and then by voters statewide. New York voters approved it in November 2013, and in 2014, the owners of all 216 parcels opted into the agreement.

As part of the deal, DEC surveyed the once-disputed parcels and made maps to show the exact boundaries of the land for which it was relinquishing its claims. DEC Commissioner Basil Seggos signed those maps Monday in Albany.

“DEC worked diligently with the town of Long Lake to acquire the Marion River Carry property from OSI and provide permanent public access to the carry and protect the property’s significant natural resources,” Seggos said in a press release.

“As the Senate sponsor of the Township 40 Constitutional Amendment, I want to thank all the voters across the state who voted for the settlement and exchange of land that makes this day possible,” stated state Sen. Betty Little, R-Queensbury. “I am so very grateful to everyone in state government, especially the team at DEC, the environmental community, our local officials in Hamilton County, Assemblywoman Teresa Sayward who sponsored the amendment in the Assembly, and especially the landowners who endured a lot of stress and frustration for so many years but never gave up. Through perseverance, we have achieved a great result.”

“It is really nice to finally be able to put this important and old issue to rest,” added state Assemblyman Daniel Stec, R-Queensbury.

Clark Seaman, supervisor of the town of Long Lake in which Township 40 and the Marion River Carry lie, called this “truly a momentous occasion.

“Many people have been working for years to bring this to fruition, including a core committee of Raquette Lake residents chaired by Carolyn Gerdin. She has been tireless in her pursuit of this settlement. All of the affected property owners owe Carolyn and the committee their gratitude. I also want to acknowledge DEC staff who have been working so diligently over the past several years to finalize this settlement.”

Gerdin, who claims title to disputed property that has been in her family for many decades, said, “The solution of the centuries-old problem of title in Township 40 is a testament to the power of people working together.”

Also, two people who had claimed title to contested parcels transferred their interests in portions of their parcels to the state: a 20-acre piece donated by Carol Redenbaugh on the northwest end of Sucker Brook Bay, with a trailhead for a hike to the summit of West Mountain, and a 116-acre parcel on the south shore of Sucker Brook Bay, donated by Jeffrey Sellon. This acquisition preserves more than 3,000 feet of pristine shoreline. Both parcels are now DEC-managed Forest Preserve.

The DEC also announced it is moving forward with acquiring at least 1,400 more acres to add to the Adirondack Forest Preserve.