Building a village, a tiny one 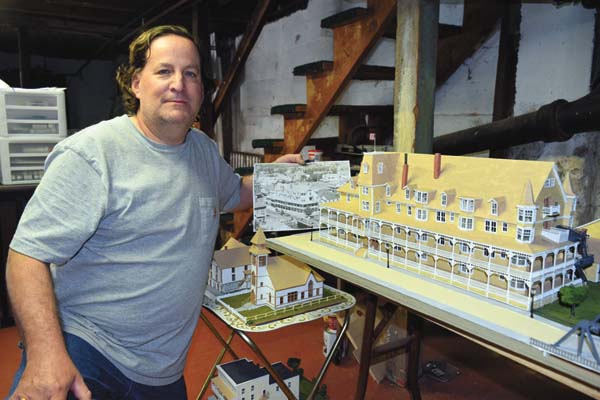 SARANAC LAKE — As the building superintendent for the Harrietstown Town Hall, John Wheeler is the custodian of one of the most historic buildings in the community.

In his spare time, he’s bringing the past back to life by building scale models of the village’s gone, but not forgotten, historic buildings: the old town hall, the original St. Bernard’s Church and the Riverside Inn, among others.

Three years’ worth of Wheeler’s work will be shown to the public for the first time in a special short-term exhibit that opens today at the Saranac Laboratory Museum on Church Street. Titled “Remember When?” the exhibit runs through Saturday.

Wheeler described his model building as a labor of love.

“I enjoy it,” he said. “It’s fun, and it’s a bit of history. Anybody can look at pictures, and they’re beautiful, especially the old crisp black-and-whites. But I just wanted to do something where, ‘Here it is,’ because it’s history gone. It’s too bad. Now all that’s left of these buildings is parking lots.”

Wheeler has been building models since he was a kid. He said was particularly fond of the military ones: tanks, battleships, fighter jets.

“You had your glue fingers and stuck them all over the plastic,” he said. “It was about putting A to B, and hopefully you didn’t lose C or they didn’t forget to put it in the box.”

Wheeler’s interest in recreating Saranac Lake’s historic buildings was stoked in the mid 1990s, when Historic Saranac Lake was raising money to restore the Union Depot train station. Working with his father, a finish carpenter, Wheeler created a scale model of the depot.

“It made for a great father-son project,” Wheeler said. “That was my first one. That started it all.”

Originally, Wheeler planned to build models of other Adirondack railroad stations, but he said he lost interest in the hobby for a while. He did a few Civil War dioramas but not much else. Things changed, however, when he became a member of Historic Saranac Lake.

“I saw what they were doing to support local history and bring kids out to see what things were like back then,” Wheeler said. “That started it again, full steam ahead.”

That was three years ago. Since then, Wheeler said he’s spent countless hours painstakingly re-creating more than a dozen of Saranac Lake’s old buildings on a one-eighth-inch scale. The first step, he said, is to research what the building looked like.

“I collect postcards, so that helps a little bit,” he said. “I go on to Historic Saranac Lake’s website. They have a wide variety of photos. From there, I see Michele (Tucker) in the (Saranac Lake Free) library and spend some quality time down there, looking for old photos.”

Wheeler said he’s also been lucky enough to talk with people who worked in or remember these buildings. He uses the information he’s gathered to take measurements and lay out a scale version of the building on graph paper. The supplies for the models come from a company in Tennessee.

“The windows, doors, chimneys, the wood shingles — a lot of it you can get, and then you try to make it fit the project,” Wheeler said. “I love the challenge of doing it. That’s what keeps you going. You want to get all the details right.”

His work includes the old Empire Hotel, which was located next to the old town hall, roughly where LaPan Highway is today. There’s also Thomas Boat Landing on River Street, which was removed to widen the state highway, and several buildings on one side of Broadway stretching from what is now K&E Enterprises to the Enterprise parking lot.

His biggest effort was the massive Riverside Inn, which was located where Riverside Park is now. Wheeler said he spent two to three hours a day working on it, and it took seven months to assemble.

“It took about a month just to draw it,” he said. “Fortunately, they did aerial photography of the village in the 1930s and 1940s. That showed all the details of the Riverside in the back, all the windows and the doors. I didn’t have to wing it. It worked out alright.”

“It’s amazing to see the detail and care that John has put into these models,” she said. “We’ve really enjoyed putting the exhibit together and going back and researching the history of these lost buildings of Saranac Lake. It’s brought the past to life for us in so many ways.”

Wheeler said he isn’t slowing down. His next project is the former Saranac Inn train station, where his great-grandfather worked as a stagecoach driver. He also wants to do scale models of the Berkeley Hotel and the Pontiac Theatre, which were lost to fire in the late 1970s and early 1980s.

Eventually, Wheeler said he plans to donate these models.

“When I get older, I’d like to give them to Historic Saranac Lake or the library so they stay here,” he said.

The exhibit runs during regular museum hours, Tuesday to Friday from 10 a.m. to 4 p.m. Admission to the museum is $5 per person but free for members and children.