Interactive ‘Life in the Adirondacks’ will be rebranded museum’s first new, permanent exhibit to open in 26 years 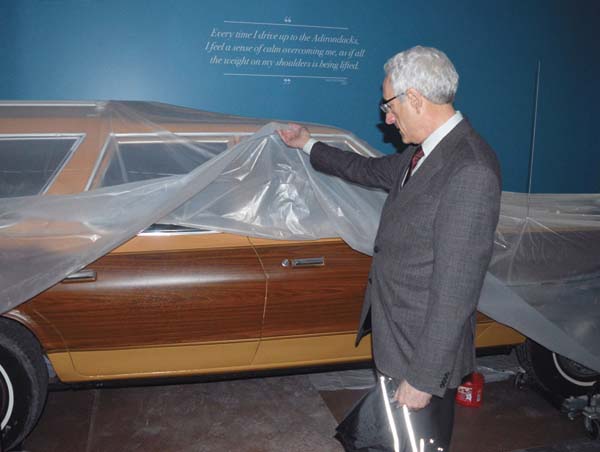 David Kahn, executive director of the Adirondack Experience, lifts a plastic cover from a station wagon that will be part of the museumÕs upcoming ÒLife in the AdirondacksÓ permanent exhibit. Part of the exhibit shows how visitors have gotten to the Adirondacks over the years. (Enterprise photo/Antonio Olivero)

Officials at the museum in Blue Mountain Lake hope the exhibit will help usher in an age of increased interactivity at the Adirondack Park’s largest cultural history institution.

“This is going to be, in the future, everyone’s first stop when they come to admissions,” Kahn added. “We’ll say, ‘Go over there! That’s where you are going to get the overview of the Adirondack story.'”

On Friday, museum personnel and on-site workers continued installing the 19,000-square-foot exhibit, located on the ground floor of a 45,000-square-foot building. “Life in the Adirondacks” will take the place of the former “Roads and Rails” exhibit.

Snaking through the building, the exhibit features customary museum relics such as carriages, railroad cars, trains and buildings. One of the main attractions is the cabin of environmentalist, guide and “Woodswoman” author Anne LaBastille, a structure the museum took apart log by log and transported over a frozen Twitchell Lake in the western Adirondacks. The cabin is being rebuilt in the museum.

Interspersed with these traditional items of history will be interactive stops, such as a giant digital floor map of the Adirondack Park.

“People will be able to take a picture, say where they live or their favorite spot in the Adirondacks, and their picture will be projected onto a map of the Adirondacks and geolocated to wherever they say they are from,” Kahn said.

Another interactive feature will be a “virtual stream” where museum-goers will be able to write a message on a leaf, replying to a theme such as, “What do you hope for the future of the Park?” That message will then be transmitted to float down the stream.

A similar interactive element will be a log jam activity in which museum-goers will digitally stand atop a log, grab a pole and avoid other logs rushing down the river.

There will also be an alcove dedicated to the Native Americans of the Adirondacks, where people will be able to watch video and hear both the Mohawk and Abenaki languages.

For children, there is a section dedicated to Adirondack mining history where kids donning miner outfits and hard hats will be able to stick fake sticks of dynamite into the exhibit, eliciting noise, flashes and other digital responses.

The museum is closed now but will reopen on May 26 for its 60th season, its first as the Adirondack Experience.