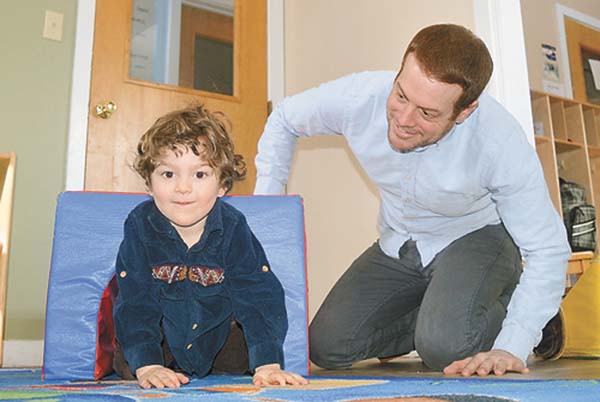 Rob Carr of Saranac Lake was inspired by his 2-and-a-half year old son Tennessee to bring a mobile play center and permanent childrenÕs museum to the Adirondacks. (The Adirondack Daily Enterprise/Antonio Olivero)

SARANAC LAKE — When Tennessee Carr made his first visit to The Wild Center, his museum manners lacked a bit. Rather than stop one by one at each of the natural history exhibits, he ran from one end of the museum to the other.

Tennessee had a good excuse, though, as to why he was so rambunctious at the Tupper Lake museum: He was just 1-and-a-half years old.

For his father Rob Carr, then the exhibits and programs manager at The Wild Center, it may not have been exactly what he was expecting the first time he brought his first born to his workplace. But for dad, it was an eye-opening experience, just like it was when he brought his son to a birth-to-six-years-old children’s museum for the first time.

Carr, 39, is an exhibit person, having worked in the museum field for years creating interactive and educational places for people to explore and learn from. From 2010 through 2016, he worked on everything from tiny exhibits all the way up to $5 million capital projects while at The Wild Center. And most recently, he was involved in designing the Wild Walk, a trail of bridges between treetops of the Adirondack forest at The Wild Center.

Carr was never really a fan of birth-to-six children’s museums. To a degree, he admits, he thumbed his nose at them, having never worked on a children’s exhibit.

“I just never really found interest until I was introduced to the whole world of having a child,” Carr said. “And in the North Country, in Saranac Lake, I just realized how large of a deficit there was for resources for young children.”

Flash forward one year. Tennessee is now 2-and-a-half and Carr has left The Wild Center to launch his own freelance design company, Darwin Design. With young Tennessee growing older by the day, Carr is invested in Saranac Lake.

Newly fascinated with children’s museums, Carr has a plan of his own for Tennessee and the thousands of toddlers and young children who call the Adirondacks home.

It’s called Play ADK. Carr’s vision through the nonprofit organization is to bring an interactive play space and children’s museum to Saranac Lake, one that will provide opportunities for tykes like Tennessee to engage in open-ended, imaginative play at exhibits and through programs focused on Adirondack culture, history and community.

To Carr, Saranac Lake epitomizes the kind of family-focused haven at the heart of the Park, one that is missing a children’s museum.

“I think, actually, children’s museums are the most important spaces you can build,” Carr said. “All of the top-rate places to live, one of things they all have in common, they have a children’s museum. Space for kids to come play, for parents to come together.”

A Play ADK museum in Saranac Lake may be the ultimate dream, but at this juncture it’s a long-term plan. In the immediate future, Carr plans to transition to the permanent site only after touring his prototype and, he hopes, gaining interest and funding along the way. It’s a mobile play center in the form of a dump truck decked out with several children’s museum-like exhibits.

Just this week Carr launched a crowd-sourced fundraising campaign through the Adirondack Foundation to raise $5,000 for the Play ADK truck campaign: https://adirondackgives.org/campaigns/a-truckload-of-fun-for-kids/. The fundraiser has gathered $400 of its $5,000 goal in just a few days, and Carr said the truck project will cost between $15,000 and $20,000 total. With $5,000 from Adirondack Gives, he believes he’ll be well on his way to unveiling the mobile play center this summer.

When Carr decided to go all in on the museum idea, he did his due dilligence and compiled the kind of research he’s learned through the years is neccessary in the world of museum and exhibit planning. Carr, Tennessee and Tennesse’s mother Danie Carr talked about how neat it would be to have an indoor play space in Saranac Lake. They took unofficial exploratory trips to several children’s museums throughout the country. As Tennessee tinkered at each exhibit, Carr took in what he liked and didn’t like about each stop.

Some of the museums he found to be very different from what he envisioned for Saranac Lake. Others he fell in love with right away, such as The Discovery Museums in Acton, Massachusetts. Part of the museum is housed in a three-story, 19th-century Victorian house, with 10 rooms chock-full of simple children-oriented exhibits. There was the train room, the ship room and the chain-reaction room, where toddlers can zoom balls down two room-sized tracks.

The museum’s mantra is “Hands on, minds at play.” This, Carr thought, is similar to something he could bring to Saranac Lake. So he’s come up with a motto of his own as he goes through the slow, detailed process of planning his museum: “High touch, low tech.”

“They don’t have to be expensive digital places to engage young children,” Carr said. “The Discovery Museum is designed so no matter what age a kid is, he or she will move through it. Everything was made out of material you could get at a hardware store — plywood, PVC piping — and in every single room, Tennessee went crazy to this.”

For father and son, it’s not all fun and games, though. Last November, Carr drafted a thorough 16-page “opportunity assessment” for a play center-children’s museum in Saranac Lake. Along with his background details on why he feels there is a need for the space and who he views the target audience of an “Adirondack Center For Play” to be, Carr meticulously breaks down line by line the capital campaign budget for the center, a forecasted operating budget and a five-year timeline to open.

He writes how the museum would not only be a dedicated hands-on experiences designed for children up to the age of 8 to explore, but a resource as well for childcare providers and schools in the community.

Carr is also currently in the process of speaking to potential donors, stakeholders and has presented his idea to organizations such as the Adirondack Foundation and Adirondack North Country Association.

As for exhibits and experiences, Carr writes how he envisions Play ADK to reflect the community and foster what he sees as important values here in the Adirondacks: A pioneering spirit, a respect for nature, a strong sense of community, a pursuit of recreation and an awareness of sustainability.

Whatever the value, to Carr, it’s all about engagement.

“It is a simple fact that ‘engaging’ does not have to mean ‘high tech,'” Carr writes.

Carr already has some exhibits in mind, ones that center around what the Adirondacks are all about, such as mountains, railroad history and Olympic sports. For the longtime exhibit designer, he’d like to open it by 2021.

But what about the four years between now and then? That was the question Carr knew he had to answer in order to conceive a transitionary lead-up period to opening the museum, a period that would raise awareness, interest and funding for Play ADK.

Carr realized he wasn’t necessarily interested in opening the traditional kind of satellite storefront or prototype exhibit space many museums operate while working to open their finished professional center. He felt the downside to that would be the public pigeonholing Play ADK as its rough-draft version of itself — the prototype phase they’d first experienced. He said he’s seen it happen before.

Through his love of trucks, Tennessee came to the rescue for dad yet again. Carr said since the time he could speak, the toddler has rambled about trucks. Last summer while father and son were driving by a vintage dump truck, it popped into Carr’s head.

“A lot of children’s museums have trucks inside, half of a truck or fire engine,” he said. “But I was like, ‘Man, instead of doing sort of a temporary center, why not just turn the actual truck into a mobile play center?

“Touch a Truck in Lake Placid,” Carr continued, “just taking Tennessee there, still to this day it was the greatest day of his life.”

Carr researched it, and found the idea of turning a dump truck into a traveling exhibit had never been done before.

“I think it’s really going to be something kids go crazy for,” Carr said.

When Carr says “mobile play center,” he really means a vintage two-axle, medium-sized dump truck. When the exhibits are installed, including those inside the bed of the truck such as a giant sand box filled with more toy trucks and slides and ropes attached to the back of truck, he plans to bring it to events such as farmers markets, festivals and concerts. He said since he launched the campaign, three people have already invited him to their summer events.

Wherever the truck ends up and whatever happens with the permanent museum capital campaign budget, Carr knows he will have one curious onlooker there with him: his son.