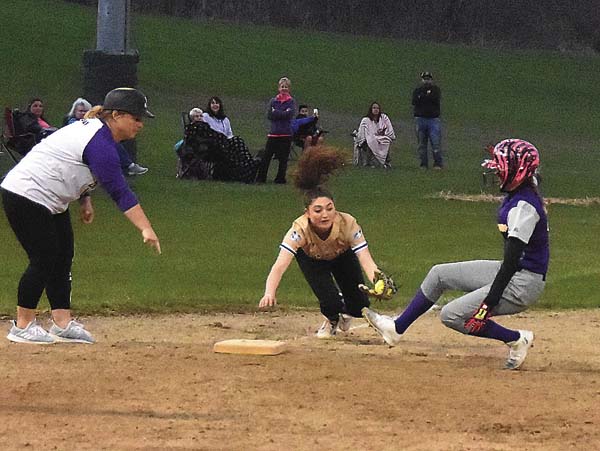 Johnstown coach Jamie Kohout looks on as Amsterdam third baseman Maddi Carmona dives in an attempt to tag the Lady Bills' Amy Snell as she slides safely into third base during Monday's Foothills Council game at Johnstown High School. (The Leader-Herald/ James A. Ellis)

JOHNSTOWN – Softball has several opportunities for players to leave their impact in the game.

The Amsterdam Lady Rams were able to get two spectacular outings and use those performances to catapult them to a 18-5 victory over the Johnstown Lady Bills in a Foothills Council match-up Monday night at Johnstown High School.

While runs were easy to come by for the Lady Rams, this offensive explosion was led by the effort of Megan LaMont who went 4-for-5 with three singles, one home run and two RBI’s. LaMont also flashed the leather and make two consecutive defensive highlight reel catches in the third inning.

“She [Megan] is a spark we need every game and she really came through today,” said Amsterdam head coach Brenden Cetnar. “Today was that confidence booster that she needed, and we hope it carries over into the rest of the season.”

Also chipping in with her bat for the Lady Rams was Madison Carmona who went 2-for-5 with a home run and four RBI’s.

In the opening inning, the Lady Bills got the jump on Amsterdam, scoring two early runs to go up 2-1 following a Joelle Bump RBI single.

“We did really well staying in the game and even got out to an early lead,” said Johnstown head coach Jamie Kohout. “Unfortunately, as the game went on, Amsterdam was just getting hits to where our defenders weren’t and their defense was making plays when we would make good contact.”

After that first inning hiccup, Amsterdam pitcher Jordyn Wozniak got into a groove and worked the next three innings without giving up any runs and recording five strikeouts in that same span. Wozniak finished the game with four innings pitched, two runs allowed and seven strikeouts.

“It was her first start on the year and to have as many strikeouts as she did, it was truly a great performance from her,” said Cetnar

Outside of a tough three-error sixth inning, Johnstown turned in a terrific defensive effort with only one error in the first five innings and had several individual plays from both the infield as well as in the outfield.

“Defensively, we did not give up many errors and a lot of them came late in the game so I am proud with the effort that we showed on the defensive side,” said Kohout.

The Lady Rams look to keep the bats hot when they travel to Shuttleworth Park to take on Scotia-Glenville on Wednesday night.

“We are down a couple players and coming back and winning big, shows the girls that we are stepping up as a team and that is huge for us going forward,” said Cetnar.

Johnstown will seek to get back on track when they travel to take on Broadalbin-Perth Wednesday night with the first pitch scheduled for 4:30 p.m.

“I told the team that we just couldn’t get our hits to land tonight but we got the next game coming up soon and we got to keep our heads up,” said Kohout.

Wozniak and Alecia; Vuskalns and Pratt

GLOVERSVILLE — Celia Meher went 2-for-3 with two doubles and two RBIs for Gloversville but it was not enough as the Huskies dropped their league opener to Scotia-Glenville Monday night under the lights at Gloversville High School.

Lassaro and Kelly Mayrtle combined to strike out three in the circle for the Lady Tartans (3-0), while Michaela Ponticello struck out five for the Huskies (1-6 overall, 0-1 Foothills).

GLENS FALLS — Mattie Benway got the complete game victory in the circle and added a double at the plate to lead Glens Falls to victory Monday.

Hannah Klingebiel went 1-for-4 with an RBI for Schuylerville, while Molly Elder went 2-for-3 and Sydney Warmt was 2-for-4 for the Black Horses.

HUDSON FALLS — Hannah Breene struck out 10 to pick up the Foothills Council victory in the circle for South Glens Falls as the Bulldogs improved to 2-0 overall and in the league.

GREENWICH — The Witches improved their record to 7-0 overall with a double-header sweep of non-league opponent Canajoharie Monday at Greenwich High School.

Lily McCauliffe struck out 18 batters in the opening game for Greenwich, while Carrissa Wardwell went 4-for-4 with an RBI and Lauren Maines had a double, single and two RBIs.

In the second game, Wardwell added a triple, two singles and two RBIs, while Maines doubled, singled and collected four RBIs and Haley Spiezio added a double, a single and two RBIs.