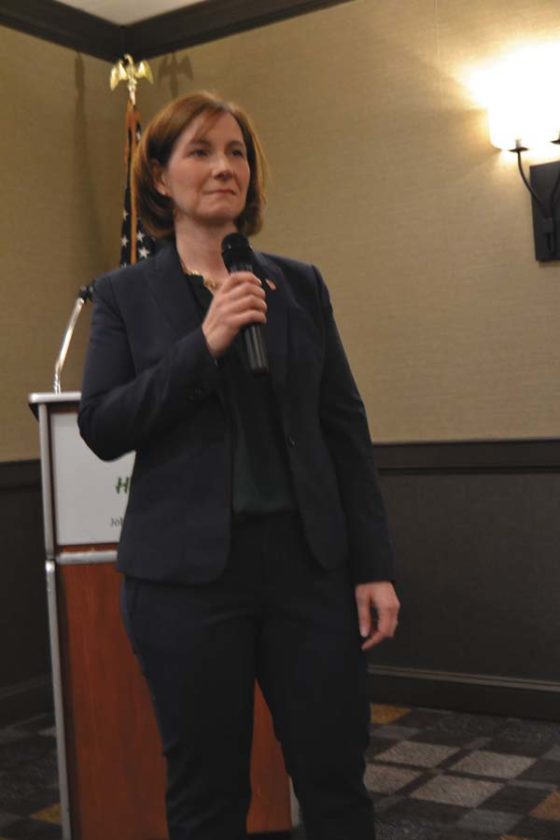 Michelle Ostrelich, Democrat candidate for the 49th State Senate District, talks about her views during a meeting of the Fulton County Democratic Committee Thursday at Holiday Inn, Johnstown. (The Leader-Herald/Eric Retzlaff)

Keith Rubino, seeking the Assembly seat vacated by retiring Republican Marc Butler, and Michelle Ostrelich, running against Republican Sen. Jim Tedisco, pooh-poohed the objection that a government health plan which covers everyone would be so expensive to taxpayers it would be financially unsustainable.

Touting the proposed New York Health Act as a route to full coverage, the candidates said there is money to pay for free health care. Rubino said that people don’t realize how much money they already spend on insurance copays and deductibles. Ostrelich claimed there are “hidden costs” that insurance companies negotiate with pharmaceutical companies and health care providers which employers aren’t aware of.

The New York Health Act, which has passed the Democrat-controlled Assembly, would help “struggling families with their medical costs,” Ostrelich said. Rubino said people shouldn’t have to start gofundme pages to pay for their surgeries.

In talking with Senate district constituents, Ostrelich claimed Republican women are turning Democrat because of the Judge Brett Kavanaugh confirmation hearings. They have been moved by Christine Blasey-Ford’s “incredibly brave testimony” alleging sexual assault by Kavanaugh more than 30 years ago, she said. Kavanaugh was confirmed to the U.S. Supreme Court by Republicans, who argued that Kavanaugh deserved the presumption of innocence and Blasey-Ford’s claim was not corroborated.

If he becomes a member of the Democrat-controlled Assembly, Rubino promised to work to bring more state money into his upstate district by “standing up to downstate Democrats.” He said people in some upstate rural counties are “feeling forgotten.”

Both Rubino and Ostrelich said they support the Second Amendment right to bear arms and disagreed with what they consider alarmist fears that they would support taking away people’s guns.

Whether school districts decide to have armed personnel to protect schools from shooters should be left up to them, said Ostrelich, who said she is a gun owner. She said suicide is the top cause of gun deaths, and families should be able to go to court to take guns away–at least temporarily–from people whose mental condition makes them a danger to themselves or others.

Asked about the legalization of recreational marijuana, Ostrelich said she would want to study the research before agreeing to legalize it. “Marijuana is demonized greatly,” she said, adding that a natural plant product is preferable to addictive drugs.

Rubino, who said he has worked with the disabled for many years, advocated unionization to help these workers get higher wages. “All unions are a benefit for the people,” he said.

AMSTERDAM — Four juveniles were identified as the alleged suspects in the investigation in an incident that ...

AMSTERDAM — A man who is homeless in the city was arrested by Amsterdam police on Saturday on assault and ...

JOHNSTOWN — More details are being released by the state related to what it calls the “pending revocation” of ...