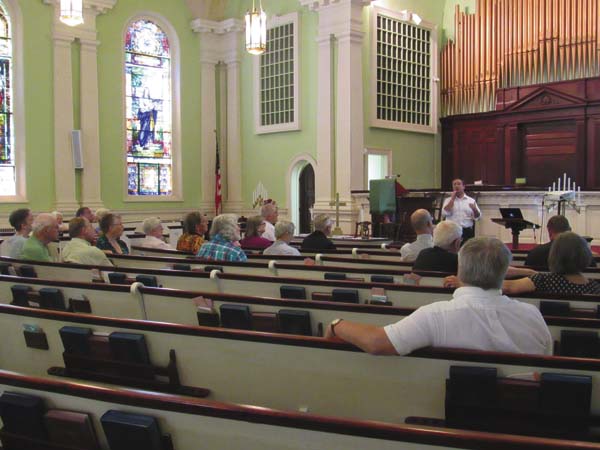 Attorney Jason Labate, of Goldstein Hall PLLC, provided basic considerations for religious organizations looking to embark on community revitalization projects during the New York Sate Council of Churches' the Church as a Catalyst for Community Renewal: an Urban-Rural Dialogue conference at First Presbyterian Church in Johnstown on Thursday. (The Leader-Herald/Ashley Onyon)

JOHNSTOWN — The New York Sate Council of Churches hosted a conference in the city focusing on the role churches can play in the economic revitalization of their community.

The Church as a Catalyst for Community Renewal: an Urban-Rural Dialogue conference was held at the First Presbyterian Church on Tuesday through Thursday featuring speakers from rural and urban communities from across the state discussing examples of churches that have impacted their communities and the various paths to community renewal that churches can be involved with.

During Thursday’s session, First Presbyterian Church in Jamaica, Queens, Senior Pastor Rev. Patrick O’Connor discussed his church’s efforts to develop a mixed use building to provide education and support services to disadvantaged individuals and families in its community.

Construction of the Tree of Life Center began in June 2017, about nine years after the church purchased the lot next door to their campus in a partnership with the Bluestone Organization for development.

O’Connor explained that before undertaking the project, the church established a separate non-profit corporation, the First Jamaica Community and Urban Development Corporation, to develop the property and manage social services and capital programs for the church that was established in 1662.

“We thought that whatever we did we should separate historic First Presbyterian Church from some of the risks and so forth,” O’Connor said.

From there the church began determining objectives for the project using information gathered over the course of a year through a community survey.

“You must ask people around you what are your needs,” O’Connor said.

The top five needs identified by community members were jobs, healthcare, affordable housing, education and training and police safety issues. The organization sought to address these concerns through the development that will offer a variety of educational programming, financial support services, health services through partnerships with the Community Health Network and Cornell University Cooperative Extension, some skill training and affordable housing.

Initial plans for a health center in the building were replaced with retail space after it was learned that a qualified center would be established next door.

The $74 million Tree of Life Center is financed under the New York City Housing Development Corporation’s Mixed Income Program and the New York City Department of Housing, Preservation and Development. O’Connor recommended being mission driven in both your project and selection of the team needed to assist generating plans, seeking lawyers and developers with expertise working with nonprofits or religious organizations.

“This is a combination not just of our efforts, but a whole group of people who wanted us to succeed,” O’Connor said.

Labate agreed with O’Connor regarding the importance of defining the goals of a project based on need, but recommended that groups also consider potential restrictions such as property leases, lot size, zoning regulations, landmark designation and local governing bodies.

He also pointed to the need for considering whether what the organization owns will support the goals of their project and what the organization is willing to support. The attorney pointed to churches that rent their space to yoga instructors or lease building space to businesses as options to generate income for churches to at least consider, noting that congregations may not feel such actions are appropriate.

In general Labate advocated for churches to fully discuss what they want to do in relation to the reality of what they can and are willing to do.

“It is probably negligence to not at least explore,” Labate said.